We get in the car. Riding shotgun is new for me. She turns the key, backs out a bit too quickly, and we are on the road.

I'm giving out instructions in bite sized chunks. Don't want to give her so much she can't swallow it. I am calm, cool, and collected. Until...

"AH! You need to take that turn a lot wider." I state the obvious, and before I realize how obvious it is, it is too late. 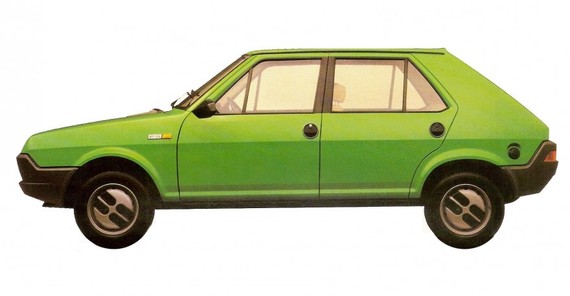 She snaps. Something that means DUH! But in more words and louder.

I do not respond, because we are driving. Or rather, she is driving. I let her vent without retort. Partially because there is nothing more to say, and partially because I'm the passenger of a teenager learning to drive.

We get in the car. Into a 1979 Lime Green Fiat Strada. Stick shift. I am in the driver's seat. I am just shy of having my license but before I do, I am learning the hows and whys of a manual transmission. My dad is my instructor.

We are on a hill at a red light and I am sweating with the sheer panic of how I'm going to do all the steps required to move forward without first rolling back. I check my rearview mirror and see the car behind me. They are close. They must be driving an automatic or they'd know better. The light turns green. I grind 'em. Hard. I am hitting everything at once -- brake, clutch, gas. My feet are flying around in every direction as my hand grabs the stick shift in a death grip.

My dad freaks. He pulls on the emergency brake. Grabs the stick shift by putting his hand over the top of mine and futilely tries to jam it into first gear. He is yelling something. I don't know what.

I am a ball of fear, panic, anger, and full-on shame. I don't know how to move forward. And there is a line of cars building up behind us. We stall. My dad calms down, almost psychotically so. In a slow and steady voice he instructs me. And I jerkily get the car rolling, once again.

It is late. We are coming back from a party. And my 17-year-old driver takes the wheel. It feels nice to have a driver. I can have that extra glass of wine if I want. It is her first time driving at night but we are close and it is all back roads. She does great. Her fear of driving has dissolved. We are rolling along just fine.

We approach the driveway, which admittedly is tight, and she pulls in going 30 miles per hour. I yell STOP and she slams on the brakes. Jerking us into the carport, narrowly missing the wrought iron fence. Our mellow drive ends with a pissed off teen and a slammed door. Panic, fear, shame, there it is again. But we're home and all's well.

I sit in the car a few minutes and let her go in ahead. When I do go in, I act like nothing's happened. No harm. No foul. Lesson learned. We can speak of it next time we drive. "Gotta pull in a little slower," I say, not wanting to incite any anger. She smiles, Yes, I got that. Sarcasm.

Again I'm in the Strada. Again I'm at a red light, and again I can't get this stupid thing into first gear. (Only later do I learn that this Italian model was particularly difficult in this way.) I panic. I yell. Dad panics. He yells. I get out of the car, right there at the light, in front of the Burger King, with all the cars behind me. YOU DRIVE!!! I yell. And you'd better believe I slammed that tiny door hard and walked home. Leaving him to figure it out. By the time I get home, he is there already. At that moment we do not speak of what happened. There'll be time for that.

It's hard not to flash to my own youth while teaching my girl to drive. These memories still fresh and vivid of my own 17-year-old existence. I know she'll be safer than me at that age. That much has already been proven by the very nature of her being.

What I wish for her are all the good drives -- the cross country road trips with siblings. The spontaneous jaunts with friends to the city or the beach or that little taco place that's open all night. The music blasting as you drive to nowhere in particular. The feet up on the dashboard as the wind and the sun fill the car and you imagine you can go anywhere your little heart desires.

What I don't wish are the perils. The crazy city traffic. The near misses. The picking up of the hitch hiker in 1982 in Connie Baker's Maverick. The dozen kids piled into Teresa Thomas' big red Dodge dart. The driving east bound on west bound Route 80 in Connie's dad's New Yorker only to realize, OH SHIT! Those lights are coming toward us!

So we drive. And I have to let her go. I have to take her to the DMV to get that little piece of ID that states yes, you are able. You can drive where you want, when you want, with whomever you want.

It's a trust game.

My mantra since her birth comes to play once again. She is she. I am me.