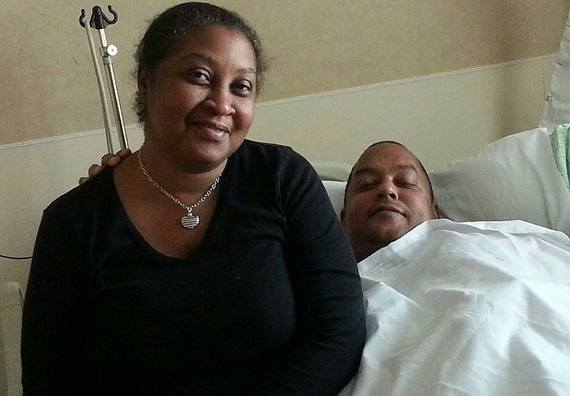 Simone and Rico, in the hospital

The Plumfund Story: Rico's Helping Heart
Rico and I are childhood friends. We've known each other for more than 30 years—since I was 12 and Rico was 14 growing up in St. Thomas, Virgin Islands. We were very close then, but over the years we lost contact.

A year ago we were lucky enough to reconnect. Rico told me about his life since age 14. How at 15 he volunteered to help the victims of the Angelina Lauro Cruiseship that burned down while tied to the dock. He ushered victims out of the doorway and over to the high-school relief center as the ship burned and ultimately sunk. And then he worked around the clock at the relief center.

A year after, Hurricane Alberto struck St. Thomas and Rico helped with the clean-up effort. In 1989 he traveled to St. Croix to help with disaster relief after Hurricane Hugo, and in 1990 Rico became a police officer. He continued to volunteer with the United Way and Red Cross. He started his own business, moved to Miami and volunteered as a basketball coach and mentor at local schools, and of course was right there in the aftermath of Hurricane Katrina, helping with relief.

Rico's health problems started in 2005 after Hurricane Katrina. His doctors diagnosed him with a weak heart muscle (CHF) and an enlarged heart (cardio myopathy). After the initial diagnosis, his health gradually declined until 2009, when Rico fell into a coma and was hooked up to a ventilator for 30 days. To make matters worse, during his hospital stay he contracted pneumonia that consequently required life saving lung surgery. Fortunately, Rico was strong enough to make it through, but it was during his recovery, his cardiologist discovered that his heart's mitral valve needed immediate surgery.

Thankfully the surgery was a huge success and he was able to begin the long recovery process. He started to feel whole again. Ultimately though, his heart was still too weak. This year, Rico was given life-changing news: His cardiologist informed him that he was at immediate risk of cardiac arrest due to his weak heart muscle. Rico would need a heart transplant.

I am so thankful that fate brought us back together when it did—it has meant I am able to be there for him. Rico has always worked for others—he enjoys nothing more than seeing peoples lives get better. When Rico got the devastating news from the doctor, I knew I had to do something to help. I came up with the idea to print t-shirts to raise money, and from there Team Heart-4-Rico was born. But I knew we needed to do more, so I set up a Plumfund campaign to get Rico through this financially stressful time. 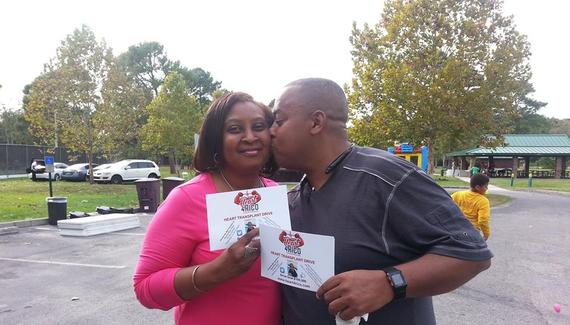 Plumfund in Action: Funding a New Heart
So far, the Plumfund has been shared 155 times with nearly $1,000 donated. Rico's spirit has stayed strong despite waiting on the heart transplant recipient list, and he is so appreciative of the donations that have come in. Although he has a long road ahead, this startling show of support from his community has already made it an easier road to travel. He's been able to travel to and from the Heart Transplant Center, make all medical visits, and cover some personal expenses.

The next phase of Rico's heart transplant process will be intense. During the first week of December, he will be hospitalized for a week and a half of testing and analysis. Once they find him a heart, he will stay 30 days in the Gainesville, FL transplant center, and then will need to stay in the area of the center for another three months. He'll also be taking heart anti-rejection drugs that cost him $1,000 per month—out of pocket.

Rico has given so generously of his time to help others lives become better. Now it's Rico's turn to receive. That's why I'll continue to share the Plumfund and ask for help for my life-long friend. And why I'll always be the captain of Team Heart-4-Rico.