Later today, we are holding a rally in the heart of Silicon Valley as part of the People's Climate Movement National Day of Climate Action. This action is one of more than 170 actions nationwide calling for urgent action on climate change.

Our event will be outside the Googleplex in Mountain View, CA, but we aren't protesting Google. After all, companies including Apple, Google, and Facebook have all committed to the admirable goal of powering their operations with 100 percent renewable energy and are making sizeable investments in clean energy. We commend these efforts, and Apple, Google, and Facebook certainly rank ahead of other tech companies when it comes to greening operations, championing renewables, and being transparent about their energy usage (as Greenpeace and others have observed).

Silicon Valley has a great reputation for innovations in technology and, most recently, investments in clean energy. But it doesn't have a great reputation for engaging with communities on issues like workers' rights, affordable housing, public transportation, and environmental and climate devastation in parts of the developing world where they've outsourced much manufacturing.

That's why our event invites the tech industry to engage with the people of the climate movement and to dialogue with groups approaching climate solutions from varying perspectives and diverse concerns that intersect with climate change. We are also calling on the tech industry to use its power and influence to voice strong support for climate action, publicly.

To the second point, the American Business Act on Climate Pledge is a step in the right direction of voicing strong support for climate action. This pledge with the White House represents a commitment from 13 companies to date, including Google and Apple, to support strong climate negotiations in Paris in December and to invest in clean energy. We'd like to see more companies sign on.

But we also want to ensure that this climate leadership is in communication with the grassroots climate movement and its intersecting social concerns. As an article from this summer in The Economist pointed out, when it comes to Silicon Valley, there exists a risk that "...a charmed circle with great wealth becomes cut off from everyone else." The article adds, "For a group rewriting the rules for industry after industry, that is a special danger."

Joel Kotkin, in a 2014 book, The New Class Conflict, observes the trend of America's wealth concentrating in fewer hands and identifies a new Silicon Valley-based tech oligarchy which, together with the older "clerisy" (law firms, policy and media elites), have ascended while the American middle class has simultaneously declined -- with noted declines in homeownership and a widening gap between middle class incomes relative to higher income brackets. Kotkin calls for an emphasis on broad-based economic growth in America. Questioning the role of the tech industry in the climate movement should also include a discussion of how to invest in the middle class and support climate justice.

The tech industry's work on climate change should include support for a "fair and just transition" to a clean energy economy, in which affected workers, their unions, and their communities are equal partners in a well-planned, carefully negotiated and managed transition from fossil fuels to clean energy. When the tech industry decides to invest in clean energy and to advocate for climate action, are they also advocating for a fair and just transition? Are they advocating for quality clean energy manufacturing and construction careers and high road job standards in the U.S.? 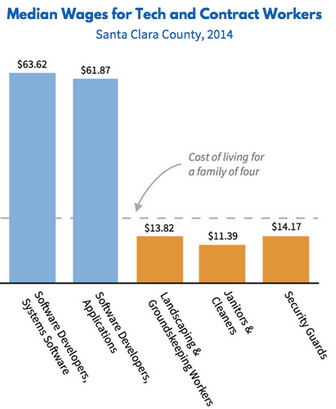 As Silicon Valley Rising has pointed out, tech companies are making big profits but many workers are being left behind. Silicon Valley Rising's demands include building affordable housing and raising wages and standards for all workers so they can afford to live in Silicon Valley. Two members from their coalition will be speaking at today's event in Mountain View.

Braulia Delgado of SEIU and Jon Pedigo, Pastor at Our Lady of Guadalupe Parish on the East Side of the city of San Jose, are among the confirmed speakers for Wednesday's rally in Mountain View. Jon, who is also involved with immigrant rights issues, has pointed out that environmental degradation is a root cause of migration to California from Central America. And immigrant communities are not protected from socioeconomic vulnerability or the impacts of climate change in the US. By now, it is well-documented that low-income and vulnerable populations are most impacted by climate change and least equipped to adapt.

In California, for example, according to a recent report from the Center for American Progress, the drought has most impacted "communities of color and low-income people living in tribal, rural, and farming communities" because of economic instability, exposure to environmental risk, and poor-quality housing and infrastructure. The people most impacted by climate change in California are low-income communities of color, and they should be part of designing solutions to climate change. 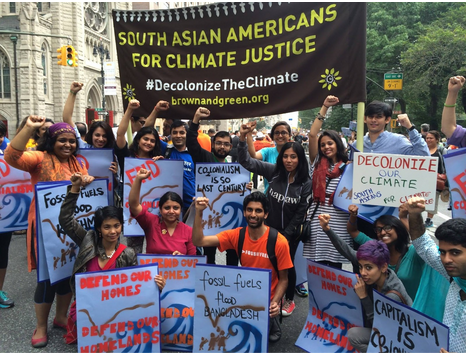 The rally ties back to last September's People's Climate March, when more than 400,000 people -- including unions, faith groups, indigenous people, farmworkers -- marched the streets of Manhattan, calling for urgent action on climate change because they all saw a connection between climate change and their core concerns.

I marched in Manhattan with a large group of South Asians concerned about climate change. Our group included members of Queens-based Bangladeshi environmental groups, who saw connections between the impacts of Hurricane Sandy and stories from their relatives impacted by heavy flooding in Bangladesh, as well as community groups whose work in Queens focuses on affordable housing and financial asset-building. And it included Indian-Americans, like myself, whose parents are part of the waves of engineer-type Indian immigrants who work or have worked in the tech industry in the U.S. (including Silicon Valley).

Join us for today's event to hear more from the diverse voices calling for action on climate change.