This takes egregiously low wages to a whole new level.

A Silicon Valley company that digitizes images said Thursday that an "administrative error" led to it paying eight workers flown in from Bangalore, India just $1.21 an hour to work 120-hour weeks installing computers in the company's headquarters.

Electronics For Imaging paid the workers $40,000 in back wages and overtime and a $3,500 fine after the U.S. Department of Labor investigated the payroll violation based on an anonymous tip, a department official told The Huffington Post.

"These folks were not only not getting time-and-a-half when working extremely long hours, they weren't making the basic minimum wage," Michael Eastwood, assistant district director for the Labor Department's San Francisco division said.

In a statement, the company said it didn't realize it was illegal to pay workers temporarily in the United States the same wages they earn in their home countries. The $1.21 was equivalent to what the employees made in Indian rupees.

“We unintentionally overlooked laws that require even foreign employees to be paid based on local U.S. standards,” the company said in a statement.

Eastwood said the company also failed to keep documentation of the hours worked by the Indian employees. Though the workers were only owed $20,000 in back pay and overtime, regulators doubled that amount to $40,000 in the settlement to compensate for damages.

The company blamed an “administrative error” and said it took steps to ensure it would not occur again.

David Lindsay, a spokesman for the company, told HuffPost the labor violation occurred last year, and that the back wages, overtime and fine had already been paid. Eastwood confirmed that all dues were paid in August.

Electronics For Imaging earned a total net income of $109.11 million last year, up from $83.27 million in 2012. The stock price has climbed steadily over the last five years: 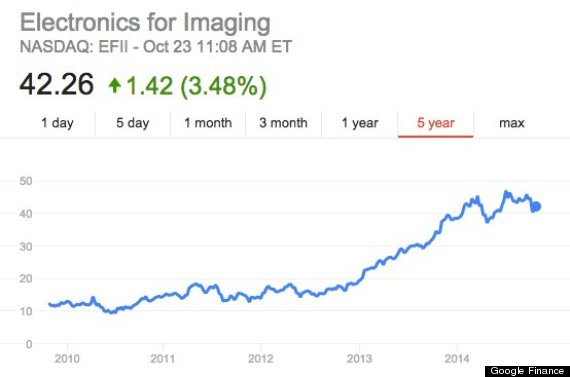 Wage theft is nothing new in the Silicon Valley region. Last year, Bloom Energy Corporation was forced to pay out nearly $64,000 in back pay and damages to 14 workers from Mexico who were paid just $2.66 an hour.

"Unfortunately, we do see a high level of wage theft violations," Eastwood said. "But we want to send a clear message that the Department of Labor is here and we are vigorously enforcing the Fair Labor Standards Act."

This story has been updated with a quotes from the U.S. Department of Labor