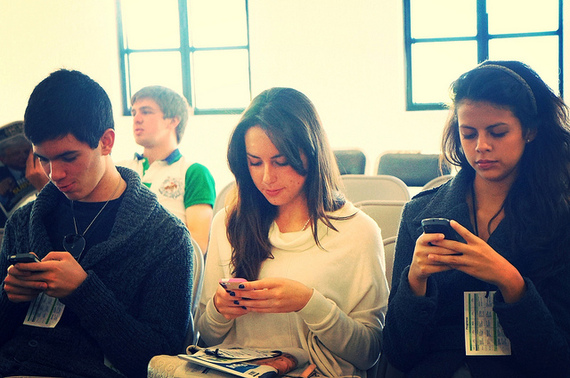 In 1994 the Beastie Boys released their multi-platinum selling hip-hop album Ill Communication. The title, and lyrics throughout, reference the break-up of AT&T, an important catalyst to the unleashing of the full power and potential of the Internet and digital technologies. The songs themselves represent so much of what the Internet has come to be for us, a post-modern medium drawing from dizzying arrays of high, popular and obscure cultural references in a fast-paced don't blink or you'll miss it but move on to what's next constant stream of information overload.

If it were possible to move through their lyrics like clicks on a moving news feed you'd swing by the chocolate drink Yoo-Hoo, New Orleans musicians Dr. John and Lee Dorsey, the book and movie Taking of Pelham 123, the 1970's TV series Kojak, Bozak speakers, film director John Woo and Hall of Fame second baseman Rod Carew - all in just the first few bars of the first song on the album. The problem is with more references coming at you, you do not have time to fully understand what you've seen or had time to recognize the reference in front of you before you have to move to click on the next reference and be ready for more oncoming. You'd also be distracted from the enjoyment of the song itself, including the beat, the music, the samples, the humor and the impressive rhyming.

Today, in our always connected, media-saturated and pinging-notifications environment, we forget to appreciate what is immediately in front of us in a constant fear of missing out on what's next. So in reality, nobody is really communicating. Instead we are all consuming but never fully digesting, Like Ma Bell, got the ill communication.

As a parent, how do we insist that our children, who never knew anything different, ignore the distractions in favor of what is present? First, we have to be prepared to do it ourselves. Is it any wonder that in a recent Common Sense Media study that teens spend up to 8 hours a day on their devices? That is of course upsetting, but how many hours are adults attached to their tech? Less than that, I doubt it.

We actually have to be legislated into stopping. There's a proposed Bill in New Jersey to punish distracted walking, criminalizing walking and texting to prevent pedestrians from being struck in the crosswalks. Really? We need law enforcement to instruct us to put our phones down long enough to cross a busy street safely? I guess it is needed since there are laws to prevent texting and driving. Are we going to have to add no Snapchat speed filter and driving to the list of new laws designed to protect us from ourselves? It is ludicrous that we cannot make smart, responsible choices when it comes to technology. What is so important coming through the feeds on our social media accounts that it can't wait?

Parents really need to lead by example here. Though, they are not doing a good job as of yet. I think parents are as distracted as the kids they are arguing with to get off the phones. So many times, I will attend a soccer game or a recital and see parents on the sidelines and in the audience with their faces in their devices. Here's a reality check: your kids see this and then can justify their own compulsive need to constantly check their iPhone with your behavior.

My hope is that as we get more accustomed to these technologies in our lives (still relatively new in terms of human history), that we will learn to adapt to their constant presence as a source for connection, not distraction. I do think that we are still in a new phase where we have not yet figured out a way to incorporate these devices responsibly. The good news is that with time and reflection, we can figure out the difference between when the technology is enhancing the task at hand, and when it is preventing us from living in the moment. The question remains, when will you pull yourself away from the screen long enough to do this? I'll have to step back, I gotta contemplate.

More:
kids and screensBeastie BoysParenting Social MediaDistracted Driving
Newsletter Sign Up
Raise the kind of person you'd like to know
Subscribe to our parenting newsletter.
Successfully Subscribed!
Realness delivered to your inbox