Everyone is a genius. But if you judge a fish by its ability to climb a tree, it will live its whole life believing that it is stupid.

This popular quote emphasizes that it's inappropriate to judge an individual by focusing on a skill that he or she does not possess. A person may be phenomenal at understanding complex mathematical relationships, but their ability to socially interact with their peers may be rudimentary or even non-existent.

This leads to an age-old question: How should a society recognize and encourage the strengths of an individual, while not overly penalizing their weaknesses? Software giant SAP is making strides to address this challenge. They want to tap into the unique abilities of a severely underrepresented, yet very talented, segment of the workforce - individuals on the autism spectrum. Their approach is actually quite logical.

(1) Technology companies have a critical need to fill STEM (Science, Technology, Engineering, and Math) jobs, and that need is expected to grow substantially over the next decade. Consider that more than 100,000 STEM jobs just in the NYC & San Francisco Bay area alone remain unfulfilled.

(2) The skills needed to be successful at STEM jobs include visual learning skills and the ability to recognize patterns, strong attention to detail, concentration and perseverance over long periods of time, high diligence and low tolerance for mistakes. Many times these traits are similar to those exhibited by individuals on the autism spectrum.

(3) Individuals on the autism spectrum are in desperate need of employment. About 50% of people with autism do not have a cognitive impairment and still 85% of people of working age with autism are unemployed.

It doesn't take a genius to figure out that companies need to tap into this underutilized talent pool if they're going to maintain their competitive advantage, or even survive.

Autism spectrum disorder (ASD) and autism are both general terms for a group of complex disorders of brain development. These disorders are characterized, in varying degrees, by difficulties in social interaction, verbal and nonverbal communication and possible repetitive behaviors.

When the media reports on the "autism epidemic," the focus is generally on the growing number of new instances in children. According to the Centers for Disease Control (CDC), the current incidence of autism is 1 in 68 children (1 in 42 boys and 1 in 189 girls). While this trend is disturbing, we must also remember that autism is a lifelong disorder. While much attention is paid to rising autism rates in children, the number of adults on the autism spectrum is increasing quickly and the nation is not prepared for the special challenges that come with this segment of the population. The cost of autism to the U.S. is approximately $250 billion per year, with that number expected to rise significantly over the next decade.

One significant challenge is that many employers don't see the upside in hiring individuals who can be considered rigid and moody or have poor communication skills. New approaches are needed that allow businesses to tap into the potential of this unique demographic. Innovative employment programs that focus on individuals with special needs can turn out some of the most diligent, dependable and productive employees.

Several forward thinking companies, such as Microsoft, HP, and CAI, have started to recognize this unique opportunity and are moving to include more individuals on the autism spectrum in their workforce.

SAP, however, has gone a step further and set an ambitions goal of having 1% of their workforce be individuals on the autism spectrum by 2020. That's an incredibly aggressive number and requires more that just a change in hiring practices, it requires a change in their overall corporate culture.

To accomplish this, SAP partnered with Specialisterne, an international non-profit organization dedicated to harnessing the talents of people with autism to find technology-related jobs. Led by Jose Velasco, the result was SAP's "Autism at Work" program. Velasco outlined a few core aspects of the program.

1) SAP partners globally for the identification, selection and training of candidates affected by autism. Including the aforementioned Specialisterne, SAP also partners with agencies such as The Arc and Expandability to be a bridge between the company and the community.

2) There is a strong desire to not have the initiative viewed as charity or philanthropy. SAP leverages the unique skills and abilities that people with autism bring to the workplace in the core processes of the company.

3) Different perspectives allow SAP to create richer and more rewarding solutions for its customers. SAP hires individuals on the spectrum to complement the existing and diverse perspectives of other employees in the company.

SAP's Autism at Work program has not been an isolated pilot program. Individuals hired under the effort have been integrated directly into the lines of business. Adam Kovalevsky, Vice President of Engineering at SAP Success Factors, explained, "It's now almost a year after 5 people joined our engineering teams through the Autism at Work program. Today, these individuals perform very effectively. We are proud to help people overcome the barriers of the standard recruiting process, which disadvantages those who are less comfortable with the typical interview cycle. And we are excited to look back over the last year and see how engineers who joined us through the program have evolved into strong, reliable members of our teams." 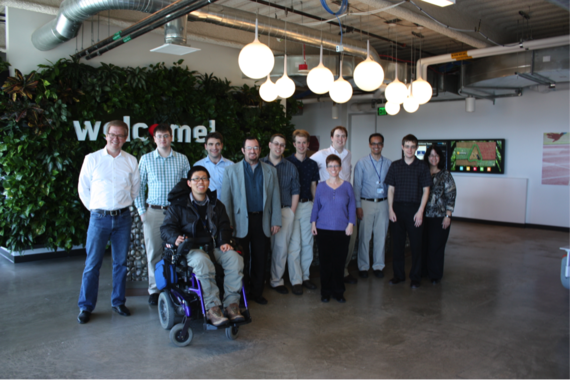 Jewell Parkinson, Head of Human Resources for SAP North America, described the program as already being incredibly successful. "The Autism at Work program is a game changer for SAP. It enables us to broaden our ability to attract, develop and retain the best people the marketplace has to offer. We see no limits and place no imposed boundaries on the rich talent, unique strengths and diverse skill sets which exist all around us and are aligned with our vision: to help the world run better and improve people's lives."

Since 2013, the SAP Autism at Work program has provided opportunities to more than 100 individuals at locations around the world. These individuals work in a wide variety of positions such as software developer, data analyst, IT technical support, graphic designer, and many more.

Velasco added, "Three years into our journey, the program continues to grow stronger. In 2016 we will expand to other locations around the world including Australia and South Korea. 2016 will also be a year where we consolidate lessons learned from our different locations with the purpose of improving and standardizing best practices."

The success of the program is in great part the result of the confluence of executive management support and grass-root employee-volunteer involvement. These employee-volunteers, known as the Autism at Work Mentors, focus on creating opportunities for camaraderie and networking for new employees on the autism spectrum.

Gabrielle Robertson-Cawley, lead of the Autism at Work mentors in SAP's Newtown Square, PA facility, added, "We have created a family within the SAP family. The mentor team provides an environment where employees can feel comfortable just being themselves, knowing that they have colleagues who are there to help guide them through social and business situations. Watching someone succeed, whether it's passing a certification exam or trying something new for the first time is incredibly rewarding."

When most people think of "diversity in the workplace", they generally think of differences in gender, race, religion, or sexual orientation. Unfortunately, individuals with special needs are an often overlooked as part of the diversity model. However, forward-thinking companies like SAP have realized that a cornerstone element of innovation is the diversity of those who participate in the creative process and the different perspectives they bring to the table - including individuals with autism.