Education is experiencing a tech revolution. Chalkboards have been replaced by smartboards and the teacher’s gradebook is published online for parents with a secure login. Tech has even infiltrated the classroom with tablets and video conferencing enhancing student engagement and creating more opportunities for remote learning.

However, though the rate of jobs in computer science continues to grow rapidly, there aren’t enough students in the field to meet the demand. Nine out of 10 US K-12 schools are not currently offering computer-programming classes.

Many also argue that the integration of technology in American students’ core curriculum is not widespread enough. The Education Testing Services (ETS), which administers exams like the GRE, TOEFL and TOEIC, published a report in January focused on the education and job preparedness of U.S. millennials; it revealed that while they are likely more educated than previous American generations, American Gen Y-ers are far behind their peers in other countries in “literacy, numeracy and problem solving in technology-rich environments.”

Despite these challenges, there are clear signs of improvement. Through revamped institutions, new programs, reexamined policies and more, the education system is evolving in the digital age and narrowing the skills gap. The burgeoning tech sector, with its expanding job opportunities, is not only prompting this change but playing a part in it. We’ve partnered with Cisco to create a comprehensive guide of the big educational shift towards a tech -- and STEM -- centric future.

1. New curriculum in schools
It’s no longer enough to show a classroom of third graders how to interact with an app about the food chain. What students really need to learn is how to build the app themselves. There is a growing need for schools to integrate skills that will allow students to succeed in tech industries into the curriculum, and many are already jumping onboard.

The Seattle Times recently reported that 10 public high schools and three middle schools in Seattle will offer computer science courses (ranging from an introductory level to advanced placement) for the 2015 – 2016 school year. The initiative began as an effort to directly prepare students for any of the increasing number of job opportunities in the city’s growing tech industry. According to a report cited in the piece, 20,000 Washington-based job openings in STEM fields were left unfilled, and out-of-state and international candidates are being hired for many of the other positions in these fields.

Massachusetts schools are likewise making efforts to incorporate tech into school-wide curriculum. Both the Beaver Country Day School in Chestnut Hill and Nashoba Brooks School in Concord have begun teaching students how to code, the former being the first school in the country to integrate coding into all of its classes and the latter of which participated in the global Hour of Code movement.

2. Re-emergence of the vocational school
For many years now, the traditional path for the middle class had been to pursue a college preparatory education during high school and to continue onto a four-year university after that. The immense growth of tech, however, has reinstated a stronger need for vocational or trade schools. While technical schools are popular among students in many European nations, pursuing a trade instead of college has carried a stigma in the U.S.

Yet tech schools provide students with transferable skills in coding, product and software development and even networking and interviewing. According to the Seattle-based trade school Code Fellows, more than 75 percent of its students enroll after already having completed an advanced degree that didn’t translate into long term post-grad employment. The other advantage technical schools currently offer over colleges is lower cost. Completion of a two-year program at a trade school will cost roughly $33,000. Compare that amount to the average cost of a bachelor’s degree, which is $127,000.

3. Shift in higher education
Oregon-based Lewis & Clark College has integrated courses around artificial intelligence (AI) into their computer science program. One alum who has taken these courses and since become a leading Cyborg Anthropologist has been heralded by the media as one of the “Most Influential Women in Technology.” The school is not alone in offering students a wider array of innovative courses and majors focused on technology. Carnegie Mellon brought on “robot master” Manuela Veloso to its faculty to teach computer science, automation and AI. Computer science students at Harvey Mudd College are required to create unique software design projects in their capstone course.

What may be most telling however of tech’s impact on higher education that can’t be ignored is the ongoing struggles of liberal arts colleges. With the recent news of impending and near closures, many in academia wonder how long it will be before new tech alternatives to education result in a sweeping transformation of higher education altogether. 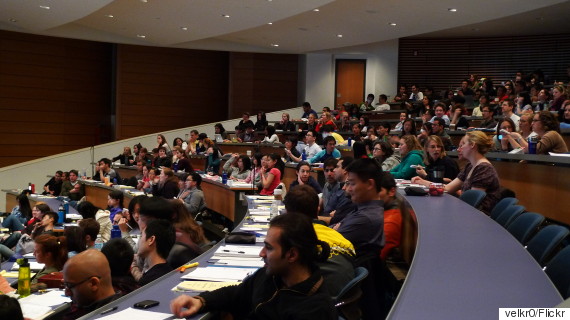 4. Federal policy and funding
For the 2015 fiscal year, President Obama’s proposed budget included $170 million of “funding that will help to train the next generation of innovators,” specifically relating to science, technology, engineering and mathematics. $60 million of that proposal was targeted at making America’s teachers better equipped to teach STEM in pre-K through high school.

With oversight from the Committee of STEM Education, which was created by the Obama administration to reallocate funds appropriately to STEM education, the White House established a five-year federal STEM education strategic plan that will put these areas of study at the forefront of nearly every school administration. The plan intends to pressure private sectors to adopt President Obama’s “All-hands-on-deck” support for advanced training of STEM teachers.

5. Private sector’s vested interest in education
As soon as President Obama gave out the STEM call in his 2011 State of the Union Address, several NGOs stepped up to back STEM education at both the lower- and upper-school levels. Organizations in association with the Carnegie Corporation of New York raised more than $30 million for the coaching of STEM teachers shortly after the President’s call to action.

Corporations including Microsoft, Intel, and Cisco have also been investing in their future workforce. Microsoft created IT academy, which allows school districts to join via an annual membership and, in return, provides them with fully fleshed out curricula for technology courses at various levels of learning. Intel provides teachers the tools and a support network to better guide their students through digital learning. Intel’s resources include a global community of K-12 teachers who are embarking on similar journeys to bring tech education and skills to students and mold a more tech aware and literate generation of learners.

Cisco is providing information and communications technology (ICT) and networking courses through its Networking Academy program. Offered through high schools, universities, and community colleges, Academy students learn the latest networking, security, and cloud technologies and stay ahead of the trends, while developing professional skills like problem solving, leadership and collaboration. Classes are taught in-person and online, and use engaging methods of learning such as interactive games.

These movements in the education system indicate a promising future for tomorrow’s tech students.

_*CORRECTION*: This article previously stated that Sweet Briar college in Virginia would be closing, as it announced in March of this year. The college announced at the end of June that alumnae had enabled its administration to keep the school in operation by providing millions of dollars in funding. The article has been updated accordingly._

_*CORRECTION*: This article previously stated that Lewis & Clark College offered a program in cyborg anthropology. While the school does offer courses around the subject of artificial intelligence, AI is not offered as a major. The article has been updated accordingly._