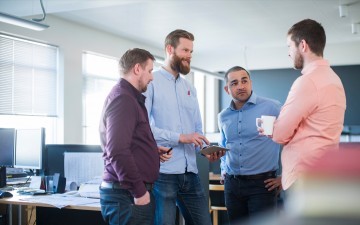 With millions pledged in support this year from the titans of tech, how can diversity lose? Intel CEO Bryan Krzanich pledged $300 million to diversify its workforce earlier this year, followed by similar announcements from Google, pledging $150 million, and Apple CEO Tim Cook, pledging $200 million. But their long-term objective - a workforce that proportionally reflects a multicultural America - demands a structural approach confronting the barriers to black achievement embedded into the American educational system that begin long before Black students fill out their first job application.

Though Google's data on diversity is dismal - 2% bBack employees, less than 30% women - it does in fact reflect America: American disparity and inequality has led to generations of unequal opportunities for women and people of color across the country. And while Google's and Apple's plans to diversify its staff is encouraging, it focuses primarily on revising hiring practices, providing resources for minority employees and recruiting HBCU students. This may alleviate the barriers for black students joining the tech industry, but it doesn't break them. That requires examining our school system.

UCLA's Civil Rights Project, a think tank investigating education and racial justice, released a report last year assessing the nation's desegregation progress 60 years after the landmark Brown vs. Board of Education case. One of its many alarming findings was an increase in what the authors called "double segregation," defined as "the strong connection between schools that concentrate black and Latino students and schools that concentrate low-income students." As they found, the most segregated schools are also the poorest:

The situation becomes even more distressing in the context of school funding. A report from the Education Law Center measuring state deemed 19 states have a "regressive" funding system, allocating less funding to districts with high levels of student poverty than to districts with low levels of student poverty - as high as an extra $2,500 more per student. And because double segregation clusters Black students into poorer schools, it's almost unsurprising that of the 19 states listed as regressive, 12 of them are also listed in the UCLA report as among the most segregated in the country.

Double segregation's effects on funding are cyclical. Roughly 87% of school funding comes from the state level, with federal funding (about 8%) still tied to standardized test scores. Federal funds have become even more crucial because many states made major cuts to education spending following the recession, relying on federal funds to fill the gap. This has created a destructive funding cycle that penalizes schools that underperform on standardized tests. And because these schools are the poorest, the most segregated and the least funded, taking these resources away routinely leads to further underperformance and more funding penalties.

Black students in states like Maryland, New York, Texas and Alabama face structural barriers beginning in K-12. So why are these tech initiatives focused so heavily on graduating seniors and college students? Rather than courting the best students of a broken education system, the tech industry must target doubly segregated districts with innovative and empowering approaches to science and technology. "Diversity" won't come from fulfilling hiring projections, but from producing a new generation of STEM leaders using the potential being squandered by our broken educational system.

When Rev. Jesse Jackson spoke at a summit meeting on tech industry reform in April, he said "There is an unbroken line from Selma to Silicon Valley." He's right. Because just as the civil rights movement demanded re-evaluating the American economic and educational structure, tech's diversity initiatives, if they are to have any impact on technology, on business, on our society, must refocus onto justice and anti-racism.