As a psychologist specializing in couples therapy, I get a daily worm's-eye view of the fallout of the tech work life that has been described in various places. The August, 2015 New York Times article about the take-no-prisoners approach at Amazon made a splash. Though anecdotal, employees were quoted saying things like, "Nearly every person I worked with, I saw cry at their desk."

At Amazon, workers are encouraged to tear apart one another's ideas in meetings, toil long and late (emails arrive past midnight, followed by text messages asking why they were not answered), and held to standards that the company boasts are "unreasonably high." "Inside Amazon: Wrestling Big
Ideas in a Bruising Workplace", By Jodi Kantor and David Streitfeld, New York Times, August 2015

The pain that this overwork culture causes employees is evident, but what may not be so obvious is the erosion of relationships, and by extension, the emotional lives of children, and the future of our society. I was underwhelmed by Bezos' response to the Times article in the form of a personal email to all his employees. Eric Pliner writes about Bezos' response, underscoring the paucity of emotional intelligence flowing down from the top in this kind of environment. To take just one of Pliner's points:

Bezos writes: "I don't recognize [the Amazon depicted in the Times article] and I very much hope you don't, either." ... As the organization's CEO and highest-paid employee, there are inevitably lots of experiences of working at Amazon to which Bezos is not privy. But culture is a form of compensation, and just as there is typically tremendous variation in salary across an organization, there is often similar disparity in experiences of workplace culture. Bezos might as well have said, "I don't understand how people can suggest they don't get paid enough here. I get paid plenty, and the people I interact with get paid plenty, too." "Jeff Bezos' email to his employees shows Amazon's leadership problems are only beginning", Eric Pliner, Quartz, Sept. 2015

Instead of taking advantage of the opportunity to convey empathy and to affirm the experiences of a wide range of Amazon employees, Bezos opts to invalidate them broadly: "I don't recognize it, so it's not real." Even worse, Pliner writes, "'[O]ur tolerance for any such lack of empathy needs to be zero' -- just as he's in the midst of displaying a keen lack of empathy."

Dustin Moskovitz -- cofounder with Mark Zuckerberg of Facebook -- wrote a smart follow-up post to The New York Times article that supports many of my beliefs as a mental health professional on the ground.

Fundamentally, this is a familiar part of tech culture: at high performing companies, employees work extremely hard, to an extent that is unsustainable for most people. But it doesn't have to be this way. Many people believe that weekends and the 40-hour workweek are some sort of great compromise between capitalism and hedonism, but that's not historically accurate. They are actually the carefully considered outcome of profit-maximizing research by Henry Ford in the early part of the 20th century. He discovered that you could actually get more output out of people by having them work fewer days and fewer hours. -"Work Hard, Live Well", Dustin Moskovitz, Medium, Aug. 2015

While Amazon's culture may be more belligerent than some, the expectation for punishing work hours seems to be pretty much the norm in the tech/start-up industry and likewise the associated financial industries. Mr. Moskovitz states, "The research is clear: beyond ~40-50 hours per week, the marginal returns from additional work decrease rapidly and quickly become negative." He goes on to elaborate that "though you can get more output for a few weeks during "crunch time" you still ultimately pay for it later when people inevitably need to recover." While some rationalize that this kind of schedule creates work group intensity and other benefits, I agree with Mr. Moskovitz' belief that he (and most people) would have been more successful, productive and happier in a more balanced work culture.

As Mr. Moskovitz shares from his personal experience of panic attacks and back problems, there are both mental and physical health repercussions of the overwork culture. Frequently the overwork culture is compounded by what is described in this articulate Times piece by Christine Porath as "incivility," which includes the kind of harshness epitomized by Steve Jobs and echoed in the Amazon stories.

Rudeness and bad behavior have all grown over the last decades, particularly at work. For nearly 20 years I've been studying, consulting and collaborating with organizations around the world to learn more about the costs of this incivility. How we treat one another at work matters. Insensitive interactions have a way of whittling away at people's health, performance and souls. "No Time to Be Nice At Work", Christine Porath, New York Times, June, 2015

It is one thing to be ambitious, competitive, discriminating and analytical, but when attacks become personal, they cross the line into contempt, which research has consistently shown to have a corrosive effect on people, resulting in employees feeling devalued and worthless. John Gottman calls contempt the "sulfuric acid" of relationships. 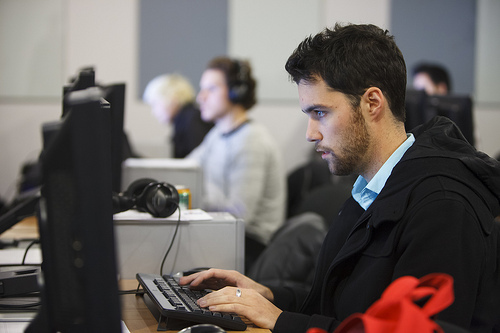 By far the most common scenario I see in my office is couples with children where the husband is buried in work and the wife feels completely abandoned and alone with all the childrearing and household tasks. Both are exhausted and sleep-deprived and nagged by a sense that the other person isn't doing enough. The husband feels chained to the insane demands of his work culture, and the wife feels imprisoned in a household of clawing children and infinite chores. Sometimes the wife is working part or full-time jobs on top of all of that, but still carries more than half of the home and social responsibilities. Certainly there are dynamics in the relationship that therapy can improve, but the stress of the modern workplace is a vice that is crushing even some very capable families.

Unfortunately, the suffering of the adults can translate directly into long-term, if not permanent, emotional misshaping of the children. When parents are chronically over-stressed, especially in the first 3-5 years of their children's lives, they can't be as emotionally available as they should. As a result, children fail to develop fundamental trust in themselves and the world, and they learn to either bury or act out their needs in ways that impair their growth and capacities for relationships later in life. This in addition to the stress they pick up directly from each parent individually, plus stress induced from parental conflict in those families where there is ongoing tension or open fighting.

I see lots of couples who are on the fast-tech-track, very successful, and then have children and are completely unprepared for how consuming and disruptive child-rearing is. Having kids is hard and overwhelming enough in itself, much less if one or both partners are also overstretched with inhuman work demands. I think it's fair to say that most people totally underestimate the amount of work that it takes to have and rear a baby (much less more than one!). Studies indicate that relationship satisfaction declines significantly for two thirds of couples after the first baby. Ideally, both parents should have a significant leave for the period from just before birth through at least the first several months of each baby's life. This is all the more important if the couple does not have close family support at hand.

A groundswell is growing among companies on the critical issues of parental leave and support for adoption and IVF -- among the many human-value areas in which the United States at large is near the bottom of the list. See this list for the companies that are leading the way (go Netflix, for unlimited paid leave for up to a year!). But as The New York Times points out, parental leave policies may be contradicted by company culture and implicit rules.

But it also raises the question of whether these new benefits will be more talked up than actually taken. Employees may wonder if doing so is acceptable or if it could hurt their careers. At many companies, the new benefits are at odds with a highly demanding, 24/7 workplace culture -- a culture that starts from the top. "Big Leaps for Parental Leave, if Workers Actually Take It", Claire Cain Miller & David Streitfeld, New York Times, Sept. 2015

For example, Yahoo extended their parental leave in 2013, yet the CEO announced last September that "I plan to approach the pregnancy and delivery as I did with my son three years ago, taking limited time away and working throughout."

If you or someone you know is caught up in the overwork rat-race, help to spread the word. We need to change the overwork culture from a badge of honor to a marker of imbalance -- if not for ourselves, for our children.