Students and animal rights activists mourn the death of Louisiana Tech's beloved bulldog mascot, Tech XX, who died from heatstroke as a result of an animal clinic employee's negligence.

Tech XX, an English bulldog, was pronounced missing on Sunday evening, July 29. A four-day search for the mascot commenced, with dozens of volunteers pawing around Ruston, LA. The school even posted a $2,000 reward for anyone who found him.

But despite their best efforts, the search was too late. Tech XX was found dead from heatstroke on Wednesday, August 1.

The employee in charge of Tech XX at Sexton Animal Clinic initially claimed Tech XX went missing when he was let out to do his doggie business. However, it has become clear that the employee left the English bulldog -- a breed particularly susceptible to heatstroke -- outside in the 102 degree weather. The employee has since been fired.

Louisiana Tech's last mascot, Tech XIX, also died from heatstroke during his time at the southern school, reported The Examiner.

In a statement to the university, Tech XX's caretaker veterinarian Patrick Sexton expressed his sadness over the bulldog's sudden death.

My family, my staff and I are extremely upset at this tragic turn of events as I know the entire Louisiana Tech Family is as well. Tech XX was a member of our immediate family and a daily part of our lives for the past four years. We are devastated over the circumstances of his passing and there will be a large void in our hearts for some time to come. As with any family member, we will spend considerable time grieving his passing.

Tech XX was employed in 2008 as Louisiana Tech's official mascot at only three-months-old. His name came from his role as the university's 20th bulldog mascot since 1930. 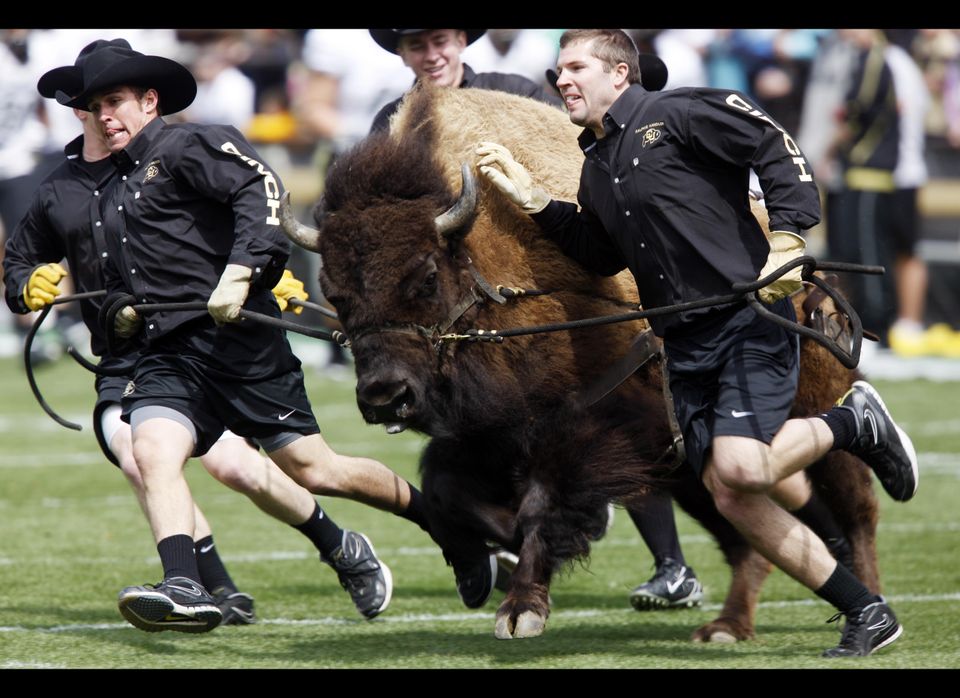 1 / 12
Ralphie the Buffalo, University of Colorado
Her (yes, Ralphie is a female) size (1,300) and speed (25 mph) combination would have Ralphie soaring up Mel Kiper's draft board. Unfortunately for CU fans, many home games in recent seasons have peaked with her entrance. From the panel: "Nothing says, 'Look out!' like a Buffalo on the run, dragging four or five guys with him." – Mike DeArmond, The Kansas City Star.
AP