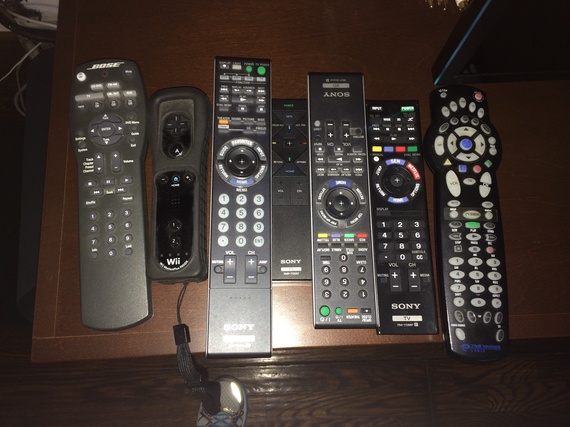 Life used to be so simple. A few years ago, it was possible to turn on the TV with the touch of a button. Today, we have seven remote controls in our homeand no matter what sequence of buttons I push, all I get is fuzz.

I rarely watch television, preferring to read instead, but I do enjoy the half hour of nightly national news. In the evening, when the time for the news nears, I start pushing the buttons on one of the remote controls in an attempt to get reception. When my frustration level reaches its limit, I give up and call one of my adult sons for help. We are not in the same city, so we use Facetime to communicate. The chosen son (I rotate my requests so one son won't have all the fun), directs me at lightning speed to run through a series of gymnastic-like maneuvers with two of the remotes -- point it up, point it down, press, scroll down, press, scroll up, press -- till I finally achieve reception. The problem is that my sons race through the steps so quickly that I am never able to reproduce the process. This holds true for any technological instrument that I ask them for help with -- the computer, iPhone or iPad.

If one of my four sons is in town, I take advantage of his presence to have an in-person lesson. Like a Three-card Monte dealer, his fingers fly over the keyboard with such speed that it is impossible to catch the sequence. All my sons have a low frustration threshold with me and eloquently express their disbelief that I don't get it instantly. They seem to get it all and their iPhones, iPads and computers are natural extensions of their bodies. They collect apps that do everything for them and use them to keep track of finances and budgets, organize their schedules, play music, text, get information about everything and much more.

I am not familiar with the extensive capabilities of each of the technological tools I use, but I am trying. One of my biggest fears is that I will push the wrong button and my work will disappear. Not an unfounded fear, since I lost an entire document I wrote while working on a government project a few years ago. The site has a timer that boots you out if you don't save your work at appropriate intervals. I was so engrossed in my work that I didn't refresh enough and the entire document was lost -- irretrievable, according to the government experts with whom I consulted.

I still get paper statements for all my business affairs and have files for everything. My children look at the file cabinets with distain as they function entirely in the cloud. They consider me "technologically challenged," but I feel that I have made great progress. I transitioned from paper and pencil to computers at the dawn of the computer age 30 years ago when I wrote my Ph.D. thesis on a Commodore 64. I was grateful for the search and replace buttons that allowed me to change a term I used throughout my paper. Just a few years prior, it would have meant retyping the entire document. I now do all my writing on the computer, read books on my iPad, keep notes and use many apps on my iPhone.

I truly appreciate all the conveniences of technology. Besides my computer, iPhone and iPad, the programmable garden sprinkler, home thermostat system and the electronics in our car are essential. In order to use them. though, I need clear and detailed instructions. The perimeter of my computer screen is covered with Post-It notes with reminders of "how-tos." While I will admit that I haven't learned all the operational benefits of my iPhone, my iPad or even my laptop computer, I decided it is best to go outside the family for help. I purchased a year's worth of courses at the Apple store to become more adept at their usage. As for the garden sprinklers, my gardener reprograms them each time we have an outage, my home thermostat stays at one temperature throughout the day and night and since we went back to Daylight Saving Time, the clock display in the car is an hour behind. But that's OK -- in six months it will take care of itself, without any input from me!