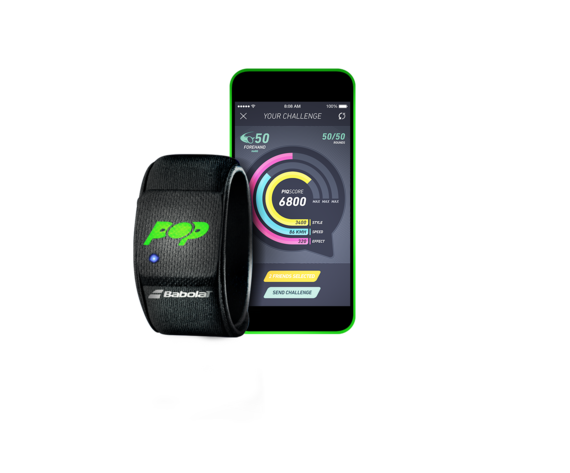 Tennis could be witnessing one the most important technological evolutions in its history: connected tennis. The new digital connection and associated apps allows players with a connected tennis device such as Babolat Play ($249), Sony's Smart Tennis Sensor ($200) and this week's release of the Babolat Pop Wristband ($90) to import, share, and analyze quantifiable data on their game as well as challenge other players.

Although digital access to power, spin, serve speed, endurance, and impact zone has little to do with how the game is played on court in the moment, the connectedness and the associated hard-fast data that is generated for players from these new devices has the potential to move the sport - and our individual abilities - to a new level.

As early as 2010, Chris Anderson, creator of the TED lecture series, told the world that crowd-accelerated innovation, on the heels of YouTube, Twitter, and Facebook, was drastically changing and strengthening how individuals learned complex activities. Anderson said this new media environment was creating connections between users that had never existed before and that these virtual connections spurred the cumulative audience to evolve more quickly, completely and accurately.

Will connected tennis spur crowd accelerated innovation within the sport? I would be skeptical regarding connected tennis changing how the game is played if my life hadn't already experienced a digital-life induced revolution: Runkeeper. Over the course of two months I switched from running three miles twice a week to running 10 miles four times a week. My drastic change in running patterns wasn't due to some deep down desire for fitness. It was instead due to an app on my phone connecting me to friends who also run. The connection increased my intrinsic desire and my associated competitiveness skyrocketed. My tennis game is also beginning a similar revolution.

Tennis star Rafael Nadal talks about his connected racket and says, "It feels exactly like my usual racket, but I will have access to a lot of information about my game like the impact zone of the ball. It's going to be very helpful for players."

"Connected tennis will change the way you approach the game because you have more information than your perceptions. I've found that sometimes you have the wrong ideas about what is going on, on the court. With the new technology, every time you play you see how you did," says Jean-Marc Zimmermann, Director of Connected Players Experience at Babolat.

What Zimmermann points out is what players up to now have been expected to extrapolate from tennis matches for themselves. During a few points that might not be a hard task, but when you assess shots, placement, spin, and power throughout three or five sets in a match, our minds and post-match body fatigue are not always objective in assessing what needs to be improved.

Eric Babolat, CEO of Babolat agrees with Zimmerman and tells me, "In tennis you are alone on the court and that is why tennis is tough. It is not only technically difficult, but also psychologically difficult. We see that at every level players are missing information on their game. When you play connected tennis you can relive the match, show your data, show your shots, and challenge friends."

Using a new Babolat Pop Wristband at the Manhattan Racquet Club in NYC, I played tennis in a new way. I was able to see my serve speed in real time, which in itself was extremely addictive. I was also able to see the power and spin of my shots. I was put on a team with four people using the new wristbands, which included Heather Watson, Britain's top female player, and my seven-year-old-daughter. Clearly the playing level of our team ran the gamut of ability levels. The Pop wristbands made individual ability level less important as all team members were helping our cumulative point score rise. It was refreshing to have a new reason to compete.

The Pop wristbands seemed to prioritize topspin and fluid ground strokes as that combination was awarded the highest score for each shot. The wristband was also useful as it can be worn with any racket selection so players do not have to change up their racket-of-choice to get useful data.

The connected tennis environment is an exciting merge for a sport with such longstanding traditions. As digital evolution comes into the tennis mix, we are definitely in-line for a stream of continual upgrades and technological evolution. Eric Babolat looks into the future of connected tennis, and says, "My vision is that every racket will be connected--that is the direction we are heading. What you do with the ball is the basis of tennis, but your footwork, how you move on the court is of course something not to be missed. We will enrich the experience soon with a connected camera or connected phone in addition to the data. I think every sports lover and tennis lover wants to have as much data as possible."