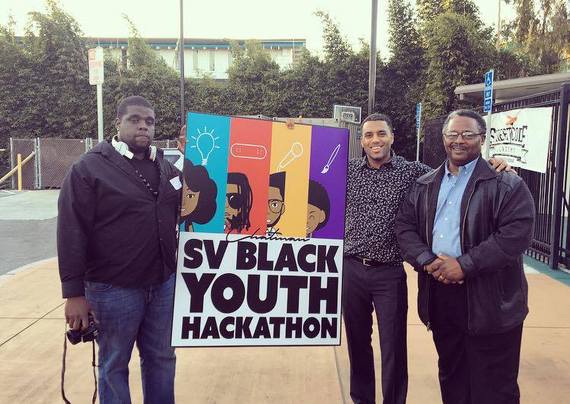 The champ is here

And then someone made a grand championship fight entrance that even President Obama himself would stand and cheer for. That someone was 6'7, 215 lbs of pure muscle, and the current WBC World Heavyweight Boxing Champion.

And yet, on Super Bowl Saturday, the champ Deontay Taylor chose to come to Rocket Fuel to speak to the kids. Anyone who forgoes the pleasures of short-term gratifications for the benefit of kids they don't even personally know, is a hero in my book.

I thought it was hard to top Michael Greene and Tony Prophet's individual talks, but the champ proved me wrong. His story resonated with me so much that at some points, I thought he was talking about my life. He spoke about real struggles, vulnerable emotions and ambition dreams that made him easy to identify with.

The fact that he spoke in a simple and real fashion kept the audience captivated from start to finish. It was an epic 20 minute talk about positivity, self-belief and faith.

Three key themes that struck me the most from Deontay's talk were about 1) speaking it into existence, 2) making tough decisions and 3) dedicating yourself to your craft.

Deontay made it a point to keep reiterating the importance of positivity.

"I'm going to be somebody someday."

Why did Deontay choose these phrases as triggers for us?

Remind yourself to keep going

Let's face it, coding isn't "cool" to most everyday people. In fact, I dare you to go tell one of your friends you're going to start learning how to code. Chances are most of them will laugh at your efforts. They'll tell you not to do it; that you can't do it; that it's a waste of time. People will make fun of you before they offer a helping hand.

You'll be lucky if you find someone who'll support you in doing something that hasn't been done before. I know that was true for me. All I kept getting hit with over and over again was endless negativity. I was sick of it.

And I thought these people were my friends?

When you're fed all this negativity day in and out, you'll start to doubt yourself. You'll almost convince yourself that other people are right about your dreams. In the face of all this negativity, you'll be tempted to quiet your voice.

Don't do it. Don't let anybody stop you from speaking positivity into existence.

They might be your friends and they might mean well, but their fears don't have to be your fears. If you're trying to do grand things, you'll have to be deaf to the negativity people will feed you. It's their unconscious way of testing your patience and mental strength.

That's why Deontay kept emphasising those positivity triggers - when you're left all alone, you'll need those words to remind yourself to keep going.

Your words will become your most powerful bond. If you say you're going to do something, do it. If you make a promise to yourself, you owe it to yourself to keep it - no matter what. If you keep speaking positivity you'll become positive yourself. With positivity will come newfound confidence. Being positive will literally keep your mind in a positive state when all the world wants you to enter a negative state.

Do you want to know one beautiful thing about coding?

Coding is writing it into existence.

Deontay drilled the message about making tough decisions home when he candidly spoke about having an unplanned pregnancy at 19 years old. Deontay distinctly remembered going to the doctor for a regular check up and being told that his daughter would be born with spinal bifida, a birth abnormality where there's an incomplete closing of the backbone and membranes around the spinal cord.

The doctor gave him two options, you can go through the process of a long and complex journey of treatment, or you can terminate the birth right here, right now and go about your life and try to fulfill your dreams without this burden.

Almost instantaneous, Deontay shook his head and said, "No. We're going to do this."

Deontay felt he needed to quit college in order to start working as soon as possible. He worked everything from Red Lobster, to IHOP, to driving a beer delivery truck to support his daughter. During this stressful time period, he kept thinking how in life, we make wrong decisions and right decisions.

While most people would have terminated at the words of "spinal bifida," he felt giving his daughter an opportunity at life was the right thing to do.

As an outlet from stress and work, Deontay walked into a boxing gym one day. In the land of rapid fire speed bags, jumping rope and fighters hitting punching bags, something click inside him. It all just made sense to him. He felt like heaven was shining a light on him on that day.

For the first time in his life, he felt like he was in the right place at the right time.

A few weeks ago, I committed to starting to learn how mobile programming. Initially I was pissed off. Here I am, in startup world, handling the marketing, branding, social media, business development, product development, R&D, sales, and now I have to learn how to build the software too?