This week's Auto Show is bound to make headlines - but we can never forget that motor vehicle crashes continue to be the number one cause of death for Americans from age 3 to 25, one of the top causes of unintentional injuries for all age groups and the top killer of employees while on the job. Every year, more than 30,000 people die on our roadways - most of them in completely preventable crashes - many caused by reckless behavior and carelessness behind the wheel.

While Motor City is rolling out some fantastic new vehicles, including life-saving technologies to alert drivers to hazards and in some cases, actively avoid collisions, we must also be wary of superfluous technologies that claim to make our lives easier, but instead put us more at risk.

It has long been understood that driver error causes up to 90 percent of crashes. Couple that with National Safety Council estimates that 26 percent of all crashes involve distraction, and it just makes sense that every new technology put in vehicles should focus on reducing risks behind the wheel rather than increasing them. But more frequently, we are seeing cars with infotainment systems that allow drivers to update social media, buy movie tickets and send or receive phone calls or texts.

Where's Your Attention?
When these systems first came on the scene, they promised to make our lives better. They would simplify our lives. Keep us connected. And yes, make us safer. But as many researchers and behavioral scientists will tell you, complex tasks require our full attention.

More than three hundred years ago, Alexander Pope penned the phrase, "to err is human." If we accept that humans are not perfect, the auto industry is enabling greater risk by introducing even more complexity into an already deadly environment.

Recent research from the AAA Foundation for Traffic Safety found that engaging with infotainment systems is dangerous not just because they take our eyes away from the road, but because these systems take our attention away from the task of driving. You probably wouldn't think using voice-to-text would be as distracting as typing texts by hand, but it is. 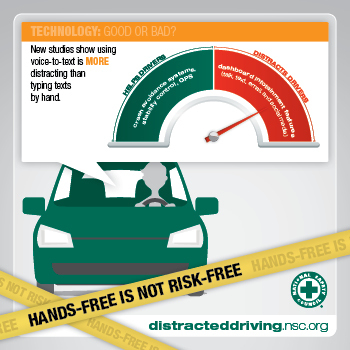 A Common Misperception
A recent National Safety Council survey found that 80 percent of Americans mistakenly believe driving hands-free is safer. Who can blame them? People assume that what is built into cars must be rigorously tested and government approved; but the reality is that safety regulations haven't kept up with the fast pace of technology. Adding to the confusion are the many laws requiring hands-free use, and it's no wonder drivers are confused.

At Auto Shows and in advertisements, people are being told about how they can "stay connected" and that hands-free devices allow them to "keep their eyes on the road and hands on the wheel." Don't be fooled. Driving is a complicated process that demands your brain's full attention. Hands-free is not risk-free. Studies have shown that drivers using hands-free electronic devices can look straight out the windshield and miss seeing 50 percent of what's around them, including traffic lights, stop signs or even pedestrians.

Convenience Has Its Costs
The truth is that safety isn't the priority with infotainment systems or our portable devices. It's about convenience. Enabling consumers to continue working, playing and communicating behind the wheel of a two-ton vehicle comes with a price - and the highest price isn't reflected on the sticker in the window.

With more than 30,000 Americans being killed each year in car crashes, we need to focus more on safety and less on social media behind the wheel. Not all technology is bad - there are tremendous gains that come from improved vehicle safety technology. But sending a tweet or checking email is not going to make us better drivers. Just because we can do something - or even want to - doesn't mean we should.

So as we read the headlines about the new technology coming out of the Auto Show this week, be wary of those that don't contribute to safety. We all share the roads and we're counting on the industry and each other to make smart decisions.

Deborah A.P. Hersman is president and CEO of the National Safety Council, an organization focused on saving lives and preventing injuries at work, in homes and communities and on the roads.