Technology keeps bridging people together. And language is not the barrier it used to be.

The growth of the Hispanic population in the United States has increased the demand for ways in which health care providers can communicate with Spanish-dominant patients. And newly developed technologies are ready to alleviate this demand.

Nowadays, family members and on-call interpreting companies serve as essential communication tools between Spanish-speaking Hispanic patients and doctors who are not fluent in the language. However, in this new age of technology, this language barrier is slowly being slowly torn down to minimize the likelihood that miscommunication could lead to lower quality medical care for this community.

According to a 2003 report from The Commonwealth Fund, Hispanics who were Spanish dominant generally had poorer health, were less likely to have a regular doctor, and were more likely to lack insurance than other communities. Difficulties gaining access to health care are worse for uninsured Hispanics who primarily speak Spanish: two-thirds (66 percent) do not have a regular doctor, compared with 37 percent of uninsured whites.

But the arrival of new smart phones has given application developers the opportunity to supply some of that needed language assistance. Applications such as MediBabble Translator, Pocket Medical Spanish and Polyglot: Multimedia Spanish Translator have managed to create a platform to improve the safety, efficiency and overall quality of care for non-English speaking patients. 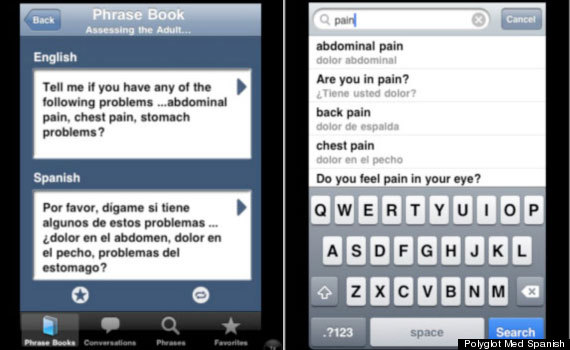 Polyglot Med Spanish, created by the Duke Area Health Education Center (AHEC) in 2011 but re-launched recently, offers the immediate audio translation to over 3,000 common medical words, phrases, and assessment questions in both languages.

“It was developed by a Duke Medical student. He realized the challenges of health care providers even with some Spanish language skills to effectively and appropriately communicate with Spanish-speaking patients,” said Dr. Marvin Swartz, Director of Duke AHEC. “The app is not designed to substitute a professionally trained interpreter. However, as a learning tool to build the health care provider’s basic acquisition of the language, the Polyglot Med Spanish app is a great tool.”

The app is free and can be found in both the Apple AppStore and Google Play marketplaces. Additionally, Spanish-speaking doctors who might need immediate assistance to translate into English can also use it.

"It works in both directions. It features the English to Spanish translation as well as the Spanish to English translation [in order to] assist health care providers whose primary language is Spanish to learn English medical terms and assessment questions as well,” said Dr. Swartz.

The apps are here to stay. And while renowned inventor Ray Kurzweil, predicts that by the year 2029 machines will have reached human levels of translation, apps like Polyglot will be essential in allowing different communities to understand each other through language.