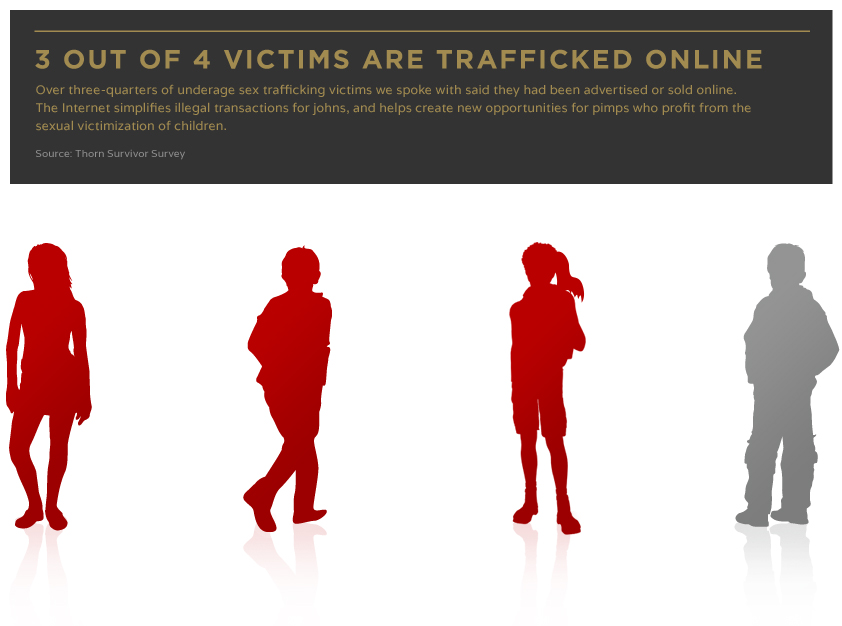 For every action there is an equal and opposite reaction. And technology, for all its utility and profit-making glory, has been like miracle-grow for the human trafficking industry.

According to The National Center for Missing & Exploited Children, in 2004 the number of child pornography files (online) stood at 450,000. By 2011 the number had increased to 17 million. I'm no mathematician, but I'm pretty sure that's roughly a 40x increase.

UNICEF reports that every year approximately 2 million children are exploited in the global sex trade.

That number is mind numbing so let's try this again.

Every year, against their will, scared, alone and traumatized, 2 million children -- a number that would fill every single pre-kindergarten classroom in the U.S. with 700,000 kids leftover -- are forced to have sex, all kinds of sex, with despicable, predatory people, mostly men. Some are wealthy traveling businessmen, some are cracked-out drug dealers, but they are atrocious all the same.

This is also true: problems beg solutions. But solutions lag behind, and without the appropriate connective tissue and reactive force, problems become epidemics become systemic issues with roots so deep they change the course of humanity.

But why should we care?

Why does it matter to us that on some "track" in one city two states away a teenager is forced to have sex with men three times her age multiple times a day? Why do we care if abortions, diseases, stigma, and a lifetime of psychological trauma become her fate?

The answer is simple: because that act, those multiple acts, will have equal and opposite effects somewhere down the road and they don't stop until everyone decides that we've had enough.

In a country that boasts about our innovative tech culture and social entrepreneurs we can't f@$%ing figure out how to minimize sexual exploitation and human atrocities that plague every race, age group, and gender within our borders, often in broad daylight.

It is not for lack of tools, it is -- quite frankly -- for lack of priority as individuals. I am to blame, you are to blame, and we have been lazy with applying our opposite force to an issue growing ever more pervasive as technological conveniences increase.

Getting pissed and fighting back

When celebrities and humanitarians coalesce around a specific issue like human trafficking, heightened awareness alongside major shifts in thinking begin to take place. When technology companies converge around these issues, execution happens at an accelerated pace.

When both happen simultaneously, the virtuous vortex comes out to play.

Fueled by Thorn's survey of human sex trafficking survivors, in which 80 percent reported having no knowledge of a hotline they could call for help during their captivity, combined with another piece of information the Polaris Project was simultaneously seeing over and over -- that text messaging was the most common form of communication between the survivors and their "Johns" -- a game changing idea ensued.

What if those being held as modern-day slaves could harness accessible technology to flip the script?

What if the very thing that had forced them to be kept under control and in captivity suddenly became the mechanism by which they could get out?

This, in my opinion, is modern day innovation -- which is less about primary technology and more about connecting the dots between technologies:

Equal and opposite reaction

In my conversation with Sarah Jakiel, Deputy Director for Polaris Project, she emphasized this idea of turning the tables: "Traffickers are tech savvy and they are increasingly using technology to exploit more and more victims. We're focused on putting this same technology to work to fight back."

And Twilio's co-founder and CEO, Jeff Lawson had this to say: "By turning human trafficking into a software problem, we can now reach trafficking victims through communication channels they use the most."

When I spoke with Claire Schmidt, Director of Programs for Thorn, I was humbled by their work. While most of us spend our days solving technology problems created by technology (oh, the irony!), people like Claire and Bradley Myles (Polaris Project) ask questions like: how can we pick up the broken pieces technology has left behind?

Initiatives like BeFree are created on a high-level with extremely intelligent, creative thinkers. But they mean nothing without an uprising, fueled by the frustration and anger of the general public - whose collective power has the ability to provide not only an equal reaction but also the larger force required to overcome society's worst afflictions.

1) We all decided the collective goal was to reduce online human trafficking by 50 percent by 2015?

2) Once a day for the next month we committed to sending a text message to a friend or contact that read: "Join the movement! Spread the word about the BeFree shortcode (233733) and reduce human trafficking by 50 percent"?

3) You implored, personally (with a face-to-face ask), ten of your closest, most influential friends to post this message to their Facebook Wall and put this message at the bottom of their signature line: "Don't ask why, just trust me: spread the word about the BeFree shortcode (233733) and reduce human trafficking by 50 percent by 2015"?

Thorn's high tech network and Polaris Project's already existing hotline has provided a technology solution. But they need an equal reaction that mirrors their passion -- a massive, human sales force to drive this forward.