If you know electronic synthesized music, you know the work of Ray Kurzweil. But the MIT futurist and transhumanist has many more inventions to his name than electronic keyboards. He's also developed a cult following for his prediction of the merging of humans and computers, which he describes in his book The Singularity Is Near. And in a forthcoming book, How to Create a Mind: The Secret of Human Thought Revealed, he offers the most advanced explanation to date for how our brains work.

In the opening session of Techonomy 2012 in Tucson today, Techonomy founder David Kirkpatrick interviewed Kurzweil on stage. Their conversation covered the exponential progression of software, how the brain works, what it will mean to think "in the Cloud" or have the intelligence of IBM's Watson computer at our fingertips, and what functions humans will still have once computers can do the jobs of even the most educated among us. 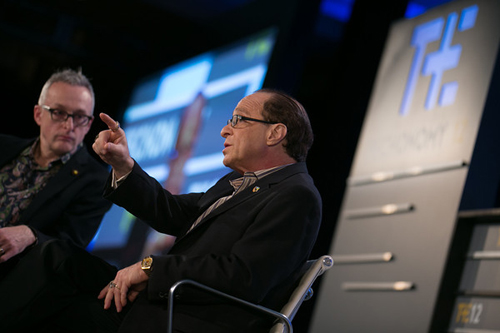 "I've been thinking about thinking for 50 years," Kurzweil says. "In coming years we'll be doing a lot of our thinking in the Cloud."

Is that another way of saying we will all have access to Watson, the IBM computer that won Jeopardy, in whatever we do? Kirkpatrick asks. As a first step, yes: "People are quick to dismiss Watson, but Watson got a higher score than the best humans together by reading Wikipedia and 200 million pages of other encyclopedias," Kurzweil says.

As an example of how rapidly society is moving toward that level of information access, Kurzweil points out that "a kid in Africa with a cell phone has access to more intelligence than the President of the United States did 15 years ago."

Ultimately, he says, artificial intelligence will operate at "the best human levels." Will experts such as physicians, for instance, be rendered redundant once computers acquire and are able to act on medical data? Kirkpatrick asks.

In the same way people in Google cars become more comfortable with AI driving than with human drivers, Kurzweil predicts that computer intelligence will become a reliable tool that people will become dependent on. "My sense is we're making computers in our own image and we'll be merging -- we already have -- with that technology. We're going to use those tools to make ourselves more intelligent."

But he doesn't sell short the power of the human brain. His thesis for how the neocortex works is that it has a uniform algorithm. Though humans are limited to 300 million pattern recognizers, only the neocortex can do hierarchical thinking and only mammals have a neocortex. "There are still tasks for humans to do, he says: relating to other humans and understanding them, being funny, sexy, expressing a loving sentiments. These are not sideshows to human intelligence, that's the cutting edge of human intelligence."

Computers can't yet replicate that. "Only recently have we been able to see inside the brain, to see internal connections forming and firing in real time," Kurzweil says. The project to understand the human brain is "grand and somewhat diffuse," but there are three fundamental reasons for it, he says.

1) To be able to fix the brain better, to fix certain connections, such as in Parkinson's disease, based on better insight into how it works and with better tools to intervene.

2) To provide models to create better machines, better artificial intelligence. Kurzweil notes that the technique that has taken over much of AI development is similar to the mathematical technique the brain uses. As we understand how the brain does intelligent things, we can create more intelligent machines, he says.

3) To better understand ourselves. After all, Kurzweil says, "That's the purpose of art and science."

Asked if he's an optimist or a pessimist, Kurzweil says there's a difference between being optimistic about the feasibility of technology versus being optimistic about the desirability for technological advances. "I'm an optimist on feasibility," he says. After all, he's predicted "the singularity" is nearer than most others have predicted. On desirability, Kurzweil says he's considered an optimist, despite having written extensively about the potential undesirable uses for technology. "We're working on programming biology away from disease, but the same tools could be used to develop bioweapons. We've all seen in movies where AI is unfriendly, and that's not crazy at all. If you have an entity more intelligent than you are bent on your destruction that's not a good thing."

How to prevent the use of technology for evil? "AI doesn't exist in a few unstable laboratories; it's empowering all of humanity," Kurzweil says. "The best way to reflect values we cherish in the future is to practice them today. It's not foolproof, but that's the nature of history."

Watch live streaming video of Techonomy 2012 at techonomy.com. Follow and tweet about the conference using the hashtag #techonomy12.