If tech industry sexism were a development bug, it would have been fixed long ago. Instead, embarrassing and tone-deaf ideas like the sexist party invitation currently costing Techweek Chicago both sponsors and support still pervade industry thinking. 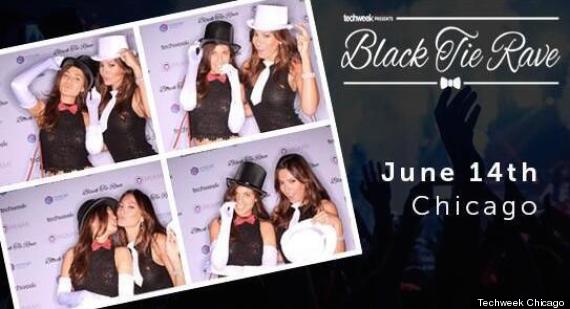 Several people listed as "Tech 100" honorees -- including major players like Google engineering manager Brian Fitzpatrick and former Obama for America CTO Harper Reed -- went so far as to request that Techweek Chicago scratch their names from the list.

"How amazingly tone-deaf it is, considering how much discussion there's been, especially in the last six months, around diversity in the tech scene, around misogyny in the tech scene," Dan Sinker, director of the Knight-Mozilla OpenNews Project, said to The Huffington Post.

Sinker, who was among the first to call out Techweek for the image, added, "This is not a new discussion." He noted that the conference caught flak last year for a closing event that featured a fashion show full of scantily clad women.

After the firestorm of Twitter criticism, Techweek Chicago issued "A Note To Our Community" Wednesday afternoon that said in part:

"The last thing we want to do is alienate anyone in the community and we sincerely apologize if this event or imagery is offensive to you."

The apology was deemed insufficient by many, including Crain's Chicago Business. That publication yanked its sponsorship of Techweek after the note was posted.

“Techweek's response to their highly offensive promotion for their Black Tie Rave was not sufficient so we have decided to reconsider our involvement in this year's event,” Crain's publisher David Snyder said in a statement.

"An invite featuring women as party girls in suggestive poses is the kind of microaggression that tries to define the space women are allowed to operate in within tech," Scott Smith, vice president of content marketing at advertising agency Cramer-Krasselt, wrote in a Crain's op-ed Wednesday.

Max Temkin, co-creator of the best-selling game Cards Against Humanity, told HuffPost that it was "toxic and depressing" for Techweek to promote an event in a way that "shows people that they're not welcome and not allowed to participate on equal terms."

Temkin was also among those who didn't buy Techweek's mea culpa. "In the South, they call it a 'big city apology,'" he said. "'Sorry if you were offended' puts the onus of the apology on the people who were hurt by it."

He said his company won't be offering support in the way of ads or sponsorships to Techweek. Temkin added, "Now I think anyone who goes to Techweek should be embarrassed to be there."

Mana Ionescu, president of the social media and digital marketing firm Lightspan Digital, called the Black Tie Rave invitation "stupid, pointless and offensive" and told HuffPost it's why her company is not recruiting at Techweek.

The bulk of the public backlash has come from men in the industry. In part, that's likely due to tech's skewed gender ratio, but it's also a reflection of some women's reluctance to speak out and make themselves a target.

"What woman who works in technology would want to put her neck on the line about this?" Temkin said. "[Techweek's move] is such a hostile, awful way to treat people who are part of this community."

Sinker agreed, saying, "If you're a woman and you speak up for something like this, you're setting yourself up for a great amount of hostility to come down your Twitter@ replies."

Ionescu said she had asked herself what kind of blowback she might experience if she spoke up. "What circles are going to treat me differently?" she said. "I don't want to be excluded."

While she said that she and her female tech colleagues discussed pulling themselves from Techweek's "Tech 100" list, there "weren't many of us [women] there to begin with."

'We don't have the same leverage," Ionescu said.

The tech communities on the East and West coasts have more of a reputation for sexism than Chicago, and Ionescu said she believes Techweek's photo fail is not representative of the better parts of Chicago's community.

As Sinker stated, "At least a certain subset of the tech community [in Chicago] is actively working to get away from [sexism] and have events that are far more welcoming to not just white dudes."

"Chicago has a lot to be proud of -- we don't need to try that hard. We need to be true and genuine and highlight the tech innovators in that space," she said. "We're a little too desperate to be recognized as a tech leader, and when you're desperate, you make mistakes."