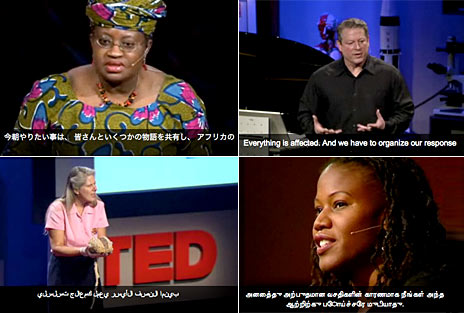 Chris Anderson calls it "the biggest story at TED since we started putting our talks online": The TED Open Translation Project launches today.

A year in the making, the TED Open Translation Project brings TEDTalks beyond the English-speaking world, by offering subtitles, time-coded transcripts, and the ability for volunteers to translate any talk into any language. More than 200 volunteer translators have already contributed, allowing the site to launch with 300 translations in 40 languages. The project is generously sponsored by Nokia.

The TED Open Translation Project is one of the most comprehensive attempts by a major media platform to subtitle and index online video content. It's also a groundbreaking effort in the public, professional use of volunteer translation.

The subtitles
Every talk on TED.com will now have English subtitles, which can be toggled on or off by the user. The number of other languages varies from talk to talk, based on the number of volunteers who elect to translate it.

The transcripts
Along with subtitles, every talk on TED.com has a time-coded, interactive transcript, allowing users to select a phrase, and have the video play from that point. The transcripts are fully indexable by search engines, exposing previously inaccessible content within the talks themselves. For example, searching on Google for "green roof" will ultimately lead you to the moment in architect William McDonough's talk when he discusses his green roof project for Ford's River Rouge plant, and also the moment in Majora Carter's talk when she speaks of her green roof project in the South Bronx. Transcripts will index in all available languages.

The translations
Rather than professionally translate talks into just a handful of languages, TED developed (with our technology partner, dotSUB) a set of tools that allow participants around the world to translate their favorite talks into their own language. This approach is scalable, and -- importantly -- allows speakers of less-dominant languages an equal opportunity to spread ideas within their communities.

To seed the site, a handful of talks were professionally translated into 20 languages. But all translations going forward will be provided by volunteers. In fact, volunteer translators have already contributed more than 200 published translations to the project (with 450 more in development). These volunteers range from well-organized groups working together in their own language, to lone translators working individually and matched by TED with others.

Here's what to look for (don't miss the interactive transcript! It's cool):

* Translated subtitles: Some 300 translations of TEDTalks are already live on the site, from our corps of dedicated volunteers (you can join! see below). Browse to see what's available in your language: http://www.ted.com/index.php/OpenTranslationProject

* Time-coded transcript: Every talk includes an interactive, time-coded transcript. Click on any phrase and the video will start from that point. This makes the full content of the talk indexable on Google, in all the available languages. The transcript language can be toggled separately from the subtitles, so you can watch an English talk with Japanese subtitles and an Urdu transcript, creating a "Rosetta Stone" effect.

* Volunteer translators: Each talk credits the translator and reviewer who worked on it; the link goes to their member profile, which shows a "Translations" tab. Join the growing list of translators: http://www.ted.com/index.php/OpenTranslationProject