By Vanessa Quirk Click here for the original article.

The year is half way through, and so are TED’s City 2.0 Awards. The Award, which offers $10,000 to 10 innovative ideas in Urban Transformation, has been awarded – so far – to an eco-artist, a Wikipedia of house-building, a noise mapper, a couple of sign-post rebels, and a public-health activist and educator.

Of all the winners, the most interesting to us at ArchDaily is Wikihouse, an open-source web site of construction sets that aims to let ”anyone freely access designs and structures that are affordable, sustainable and respond to their needs – and to build them for themselves.”

The two London-based designers behind Wikihouse, Alastair Parvin & Nick Lerodiaconou, were inspired by what they considered to be architecture’s long-standing elitism. As Parvin explains to the TED Blog: “For too long, cities have been made by the 1% and consumed by the 99%. We wanted to see what it would take to create something that would allow the 99% to make cities for the 99%.”

Since they began the project in 2011 at the Gwangju Design Biennale in Korea, 5 prototypes have been assembled. With their TED Winnings, they are pairing up with Brazilian organization, Dharma, to empower the youth of Rio de Janeiro’s favelas to collectively build community centers.

As we’ve written about before, the potential of open-source design will fundamentally change the architecture profession as we know it. Wikihouse is not just a brilliant way of tapping into and empowering the millions of people who don’t have access to design professionals – but it potentially represents the future of architecture itself. 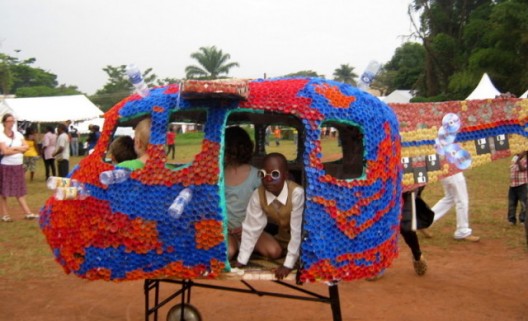 Playgrounds made from recycled water bottles, one of the ten City 2.0 Award Winners.

The other Award winning projects are more traditional Urban Interventions. Entrepreneurs Asim Fayaz, Omer Sheikh, and Khurram Siddiqi are hoping to install and maintain road signs in chaotic Lahore; and Ruganzu Bruno Tusingwire, an eco-artist working in his native Uganda ”plans to turn thousands of plastic water bottles into an amusement park for children.”

And the final two harness the power of maps to empower citizens towards healthier living: in the quest for “sonic health,” Australian sound and video artist Jason Sweeney wishes to create a crowdsourced map to geo-locate the “quiet” spots of our cities; in response to the cripplingly spread of cholera in Pakistan, Senior TED Fellow Faisal Chohan hopes to train “everyday citizens to map the flow of water in their local areas,” thus identifying potential spots of contamination.

There’s still time, and five slots left, for another project to win the Prize – to nominate, check out the City 2.0 site here.