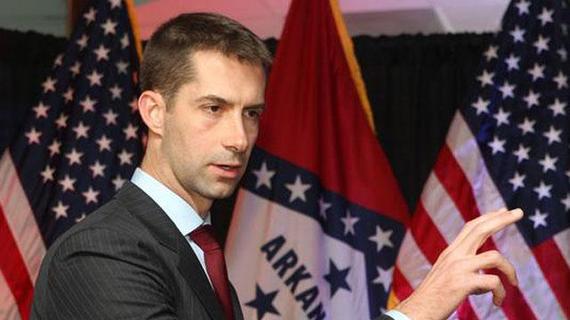 Speeches have fingerprints, and the speeches of politicians have the biggest fingerprints of all. They are packed with individual tricks and traits that tie them back to their creators.

And that's why Senator Tom Cotton's maiden-speech from the floor of the Senate is so fascinating. Cotton has already distinguished himself by authoring the Senate's controversial letter to Iran. Look at Cotton's maiden speech however and another set of fingerprints quickly emerge.

Cruz has one of the most distinctive speaking styles in Washington. No other senator can take solid facts and manipulate them with such panache. This mastery is what enables Cruz to make the outrageous sound credible.

Cruz is an accomplished speaker and deploys those skills to control his Tea Party power-base.

So what is the Cruz'ian connection to the maiden speech of Tom Cotton?

A Ted Cruz argument is constructed in a specific way. Cruz will always start with facts that sound, on the surface at least, completely credible. He'll then build out from those facts to construct his wider argument. Take this example from a 2014 speech to the Heritage Foundation:

The fiscal evidence against Obama therefore sounds damning. Except -- wait a minute -- those carefully selected numbers conceal a false base-point, and that is inflation. By conveniently ignoring this elemental aspect of economics, Cruz can damn the president with a completely false case that somehow still sounds credible.

As a speech-making move, it's utterly deliberate -- an intent to deceive with a realistic chance of not being caught.

Now take a look at this key line from the Tom Cotton speech:

... in 2008, the base budget and wartime spending combined was $760 billion. Incredibly, the total defense budget plummeted by $200 billion last year.

The move is classic Cruz because a crucial fact has been omitted. What else was happening in 2008? It was the most expensive point of the most expensive war in history! Today's defense spending is inevitably going to appear smaller -- artificially puny by comparison.

The final fingerprint is that the speech was delivered clean. Many speakers rely on tricks of wordplay to whip-up an audience. Cotton uses a style that is remarkably plain, and by doing that his managed facts can appear all the more credible. Cotton, like Cruz, deliberately avoids the appearance of artifice as his primary technique for concealing it.

The fact that Tom Cotton is so willing to brazenly raid the Ted Cruz playbook indicates that he sees himself as a head-on rival.

If, as this speech suggests, Tom Cotton's true target is to out-Cruz Cruz and challenge for leadership of the Tea Party, then Mitch McConnell's challenge of controlling the Republican message is about to become even more interesting than it is already.