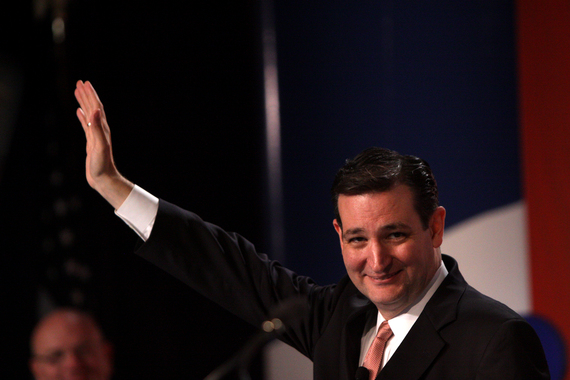 With Hillary Clinton announcing her presidential ambitions Sunday, the race for 2016 has begun in earnest. The former Secretary of State will be the first official Democratic candidate and third overall, following Senator Rand Paul's Tuesday announcement and Senator Ted Cruz's speech nearly three weeks ago.

The first official candidate to announce, Ted Cruz spoke from Liberty University, a private Christian college in Virginia that the Washington Post called "the perfect launchpad."

For a conservative Christian perhaps best known as an anti-Obamacare crusader, the evangelical university founded by Jerry Falwell that sued the government over the health law is indeed a natural fit. In another sense though, Liberty is an awkward choice for a senator who made his name decrying big government.

In 2013, the most recent year for which data was available, Liberty University received $104,061,698 in Pell Grants from the federal government -- not only is it the largest award of any private non-profit college, it's the only such sum over a hundred million dollars.

The funds help students afford tuition, housing and school supplies. They are grants, not loans, given by the federal government through the schools.

Government largesse is anathema to Cruz though -- he's cast the debate about the role of government as "the epic battle of our generation, quite literally the battle over whether we remain a free market nation."

In his 2012 Republican National Convention speech, he proclaimed: "Government is not the answer. You are not doing anyone a favor by creating dependency, destroying individual responsibility." 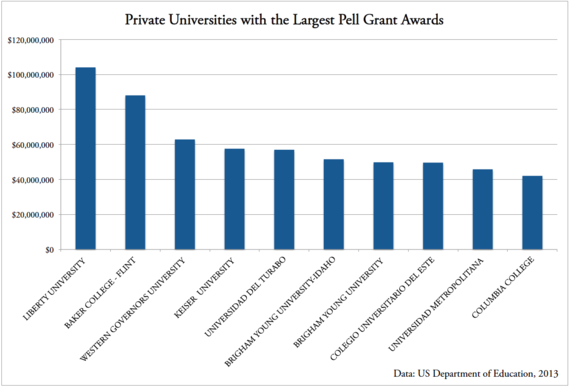 Liberty's outsized grant total is a result of its enrollment numbers -- lots of students mean lots of Pell Grants. Compared to other non-profit private colleges, it's not necessarily unusual. The average Pell Grantee at Liberty gets $3,359 from the federal government, compared to an average grant that year of $3,578.

What makes Liberty stand out is their immense online student population. While only 13,500 students study on the Lynchburg campus at which Cruz announced his candidacy, another 95,000 are enrolled online.

The school makes the majority of its tuition revenue from these online students.

Since Jerry Falwell Jr. took over Liberty after his father's 2007 death, the university has followed the model of for-profit online colleges like the University of Phoenix. They've embraced paid online education and even enroll six online division employees in for-profit colleges to keep track of the competition.

The comparison is also borne out with Pell Grants. Of the ten schools that see the most tuition funding from the federal government, seven are for-profit colleges. Liberty is the only private non-profit in the top ten.

Online education and federal tuition funding have historically, and controversially, gone hand in hand. For-profit online colleges have drawn intense criticism from Senate colleagues of Mr. Cruz like Tom Harkin, among others. These universities are deeply dependent on federal funds, with an average 86 percent of their funding coming from federal taxpayers.

According to Liberty University's 2014 annual report, of the roughly one billion dollars of financial aid their students receive, three-quarters comes directly from the federal government -- either as a loan, Pell Grant or VA tuition assistance.

Besides their dependence on the federal government, for-profit colleges have also been criticized for saddling students with huge debt and little earnings improvement. Liberty University again follows their lead.

Online comparison engine College Factual gives Liberty a "Poor" value rating and considers it one of the "worst value" colleges in the United States, ranking it in the very bottom five percent: 1,174 out of 1,223. According to their analysis, Liberty University graduates won't catch up to the earnings of high school graduates for at least thirty years -- the middle of their careers -- if ever.

In his announcement speech at Liberty, Ted Cruz said, "[I] took over $100,000 in school loans, loans I suspect a lot of ya'll can relate to, loans that I'll point out I just paid off a few years ago." It should be mentioned though that Princeton, the senator's alma mater, fares more than a bit better in value measures.

Considering Liberty's online focus (and the importance of federal tax dollars to that business), a few lines from Cruz's speech comes across in a strange light:

The Washington Post article that called the school the "perfect launchpad" for Cruz noted the serendipity of the date: March 23rd. It was exactly five years to the day since Obamacare was passed. Cruz and Liberty University are both known for crusading against the law, to the lengths of non-filibusters and go-nowhere lawsuits. Now, as he announces his bid for the presidency, Cruz said he'll be signing up for Obamacare himself.

The anniversary irony is not limited to the wood year -- the paper anniversary also brings an awkward reminder.

One year before his announcement at the grant-heavy Liberty University, Cruz introduced an amendment that, besides repealing Obamacare for the umpteenth time, would have dramatically cut Pell Grants. Had it passed, he might have announced his candidacy to a thinner crowd, if the school even welcomed him to campus at all.