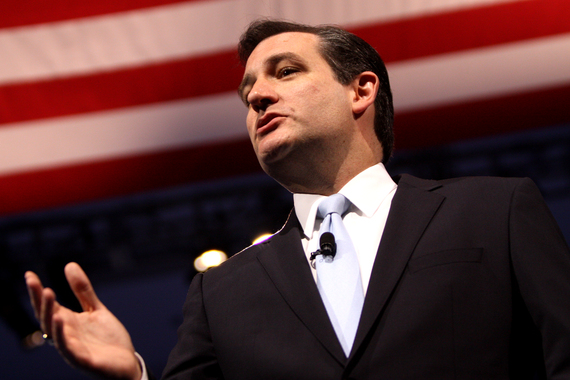 Remember that time Senator Ted Cruz stood before 11,000 students and said, "Today I am announcing that I'm running for President of the United States" and then everyone wrote about his entrance into the 2016 race? Well, apparently, that wasn't his announcement speech. According to Cruz's communications team: "There was no announcement speech."

On Monday, I wrote in The Huffington Post about Cruz's March 23rd speech at Liberty University. The story examined data on the federal government grant program that the school depends on for a huge portion of its revenue. Juxtaposed with the senator's 2013 attempt to cut the program and his broader stance on the role of the federal government, the data made his announcement's venue look a bit awkward.

Mr. Perry is Ted Cruz's voice on Twitter. Literally. He's the guy who writes what Ted Cruz tweets. A CNN profile of him a few months ago begins:

"Josh Perry is a lanky, 26-year-old from Nederland, Texas with a good job on Capitol Hill and a healthy adoration for Taylor Swift. And every day, he pretends to be Ted Cruz on the Internet."

As Cruz's online voice and in-house digital strategist, Perry adds a T. Swift inflection to the conservative senator's Twitter. In November, he tweeted an auto-tuned video of Obamacare architect Jonathan Gruber with the "Shake It Off" beat underneath and in December he tweeted a Vine of the same song's "I keep cruising" lyric with the joke "heard that new Ted Cruz song?"

While I would have loved to discuss Taylor Swift and the political pun potentials in her song "Blank Space" (write-in ballots, maybe?), Perry and Phillips started a Twitter back and forth with me about my article (here's the thread and where it stands as I write this post).

The Cruz communications team arrived at the argument that it's unfair to scrutinize every setting for every speech. Reasonable enough, I thought, but the announcement that you're running for president isn't an everyday stump speech. It's hugely symbolic and its setting bears a higher degree of scrutiny.

In 2007, Obama announced from the Old State Capitol in Illinois, where Lincoln began his political career. The venue drew comparisons to the Great Emancipator and contributed to the then-senator's campaign narrative of unifying politics, not to mention his candidacy's potential historic significance.

Marco Rubio announced on Monday from Miami's Freedom Tower, a Florida landmark that underscores the senator's personal story as the son of Cuban immigrants.

And when Ted Cruz spoke at Liberty University, the Washington Post called it "the perfect launchpad" for his candidacy, writing that the school's evangelical legacy, crusade against Obamacare, and non-elitist status compared to Cruz's own pedigree all made for "the perfect backdrop for his main themes."

When I defended my scrutiny of the Liberty launchpad on the grounds that setting matters in presidential announcements, Cruz's communications team countered that there simply was no such announcement speech. He'd announced on Twitter hours earlier, so the Liberty University speech didn't count.

.@kevinstownsend @MrJoshPerry there was no announcement speech. There was an announcement tweet about 10 hours before a speech

I responded with a YouTube link to the exact moment in his half-hour speech where he announces his candidacy and the exact announcement quote:

.@RealBPhil @MrJoshPerry “Today I am announcing that I’m running for president of the United States” -@tedcruz http://t.co/Qa2Or9QTHB

I didn't hear back from them the rest of the evening and thought that was that. Their point was a semantic one on shaky ground and a strange stance for a communications team, so surely they wouldn't keep going? But they did. I woke up the next morning to find that at 2:30 a.m. my time, Cruz's New Media Director had gone further down the semantics rabbit hole:

@kevinstownsend @RealBPhil yes -- "today." As in that day. A day in which he'd already announced on Twitter.

Candidates can announce online. Clinton did on Sunday. More will in the coming months, I'm sure. But a rehearsed half-hour address to an 11,000-person crowd ending in "I am announcing that I'm running for President" seems pretty reasonable to call an announcement speech. Every media outlet seemed to think so and called it as much when reporting on the address. Speaking with Sean Hannity on Fox News later that day, Ted Cruz himself called it "the announcement speech."

His campaign site TedCruz.org also mentions "the announcement speech at Liberty University" in a post written by his Houston communications team. I tweeted the post to Phillips and Perry, and that's where the conversation stands.

There's nothing wrong with arguing a point -- that's politics. But when that point dives into such semantic depths that it contradicts your own candidate and campaign materials, I'd suggest taking Taylor Swift's advice and just shake it off.