Donald Trump, the loud-mouthed, bombastic, tell-me-like-it-is real estate billionaire who remains at the top of the pile in all major national and state-level polls, loves to pick on Sen. Rand Paul. He lashed out at the eye-doctor, constitutionalist and junior senator from Kentucky seemingly out of nowhere in the very beginning of the second GOP presidential debate in Simi Valley, Calif. On the very first question, Trump preemptively blasted Paul without being attacked. "Well, first of all, Rand Paul shouldn't even be on this stage." Trump told the national audience of 23 million Americans. "He's number 11, he's got 1 percent in the polls, and how he got up here, there's far too many people anyway."

I feel the same way about Sen. Ted Cruz, the conservative scion from Texas who is running on an anti-establishment platform and Washington outsider who is willing to take the fight to his own congressional leadership. Cruz isn't lying: in fact, he has hit Speaker John Boehner and Majority Leader Mitch McConnell in stump speeches in the past few weeks almost as frequently as the Republican Party's favorite target in Hillary Clinton. Cruz also possesses a voting record in the Senate that is extremely conservative in virtually every area of policy, from taxes and spending to national security.

But, as I have written in the past (first here and then here), his uncompromising voting record and his brash rhetoric (particularly against President Obama) does not serve the country well -- particularly at a time when politics to most Americans already resemble a giant food fight among adults who are dressed in really nice, expensive suits.

Ted Cruz can run for whatever office he likes, including president of the United States. Yet just because a person can run for higher office doesn't make him or her a good choice to run the world's strongest and oldest democracy. Why the country would want someone rigid in his policy views and unwilling to reach out and compromise with the other side -- traits Cruz brags about -- is simply beyond me. Thankfully, polls show that registered Republicans don't seem to think that is a good idea (Cruz received 5 percent in the latest CBS News/New York Times poll).

A look at the second nationally televised GOP debate demonstrates precisely why Cruz will hopefully stay away from the top tier candidates (not that Donald Trump is someone who is imminently better).

On Iran and the nuclear agreement: "[T]his Iranian nuclear deal is nothing short of catastrophic," Cruz said. "This deal, on its face, will send over $100 billion to the Ayatollah Khamenei, making the Obama administration the world's leading financier of radical Islamic terrorism. This deal abandons four American hostages in Iran, and this deal will only accelerate Iran's acquiring nuclear weapons. You'd better believe it. If I am elected president, on the very first day in office, I will rip to shreds this catastrophic Iranian nuclear deal."

This was only part of Cruz's answer (for the full remarks, check out the transcript of the debate), but it's instructive of how ill-informed Cruz appears to be on the biggest national security topic of the last two months. Cruz is free to oppose the Iranian nuclear agreement if he wishes (all congressional Republicans and every single one of the GOP presidential candidates are loudly against the agreement, after all), but to paint the deal as the second iteration of Neville Chamberlain's cave to Adolf Hitler in 1938 is ridiculous on the merits.

By the looks of Cruz's answer, he probably hasn't even read the agreement. If he did, the junior senator from Texas would see a verification and monitoring system over Iran's nuclear program that is stronger than traditional arms control deals in the field of nuclear non-proliferation. Two-thirds of their centrifuges shut down and locked up for 10 years; a 98 percent reduction of their low-enriched uranium stockpile for 15 years; a 15-year cap on the amount of enriched uranium Iran can produce; a 15-year restriction on what kind of uranium the Iranians can produce; a 25-year inspection regime that allows IAEA monitors to track Tehran's entire nuclear-fuel cycle; a 20-year monitoring regime on the construction of centrifuge machines; an arrangement that assures that IAEA inspectors will get access to undeclared sites if Tehran refuses it; a snap-back mechanism that automatically punishes Tehran if they fail to provide that access or are in general noncompliance; and an arrangement that forces Iran to cooperate with the IAEA to finally put the PMD issue to bed. All of these steps are mandatory and are required to be completed before Supreme Leader Ayatollah Ali Khamenei receives a dime from sanctions relief.

How can we square these facts under the JCPOA with Cruz's statement during the debate? Well, we can't. If a President Cruz had his way, the entire deal that places all of these constraints on Iran's nuclear program would be ripped up on Day 1 regardless of whether the Iranians were complying and despite the fact that the vast majority of the international community firmly supports the accord. 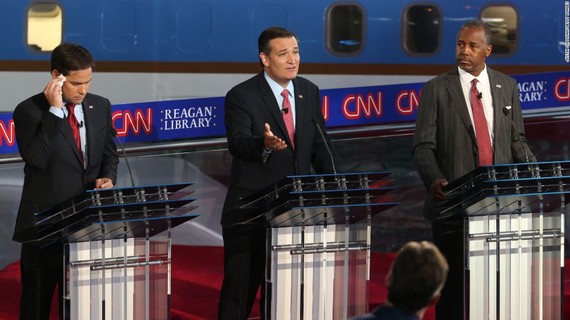 There is a lot more to Cruz's remarks on the Iran nuclear agreement than I cannot fit into this space (later in the debate, he said that President Obama is "violating federal law" by refusing to hand over the Iran-IAEA side deals; news-check, the administration doesn't have those deals in its possession). But it makes the facts abundantly clear: Cruz is either making an argument he knows to be wrong, or he didn't do his due-diligence as a U.S. Senator during the previous two months of congressional review.

On Planned Parenthood and Shutting Down the Government: "We shouldn't be sending $500 million of taxpayer money to funding an ongoing criminal enterprise," Cruz told CNN'S Dana Bash, "and I'll tell you, the fact that Republican leadership in both houses has begun this discussion by preemptively surrendering to Barack Obama ... We need to stop surrendering and start standing for our principles."

This was a powerful line for Ted Cruz during the debate, and it is no doubt a genuine one. It will give him a lot of applause from the evangelical and religious wing of the Republican Party that he's trying to bring into his camp. But, as Gov. John Kasich implied immediately before Cruz spoke, tying a defunding measure on a specific policy or program to a must-passed spending bill that would keep the government functioning has been tried before with Obamacare two years ago. It didn't end well for Republicans: after a 16-day government shutdown, the GOP leadership eventually had to cave without getting anything substantial in return. And were it not for a terrible rollout of the Obamacare website in 2014, there was a reasonably good chance that Republicans may not have taken the Senate back during the midterm elections.

Cruz should know how counterproductive the Obamacare strategy was in 2013, because he was one of the main architects. He teamed up with conservative Republicans in the House to put an Obamacare defunding rider into the broader spending bill that needed to be passed by September 30, 2013. The tactic was designed to force President Obama and congressional Democrats to negotiate over Obamacare or at least delay its implementation, but it failed abysmally. Now, despite the conventional wisdom that Republicans were largely to blame by the American people for the 2013 shutdown and will be blamed again, Cruz is resurrecting the very same strategy to eliminate federal funding for Planned Parenthood -- meeting with House conservatives to get it done.

Part of being president of the United States is knowing when to restrain yourself. This is not likely to happen with a President Cruz, who apparently believes using a failed strategy for a second time -- never mind the consequences to his own party -- will work out.

On the Supreme Court: According to Cruz, "we have an out-of-control Court, and I give you my word, if I'm elected president, every single Supreme Court justice will faithfully follow the law and will not act like philosopher kings imposing their liberal policies on millions of Americans who need to be trusted to govern ourselves."

Cruz has had a successful career as a lawyer in Texas and likes to point out that he argued in front of the Supreme Court as the Texas Solicitor General. Cruz, however, glosses over the fact that the number-one job of the Supreme Court is to interpret the U.S. Constitution and serve as the top echelon of judicial jurisprudence. Article III, Section 1 of the Constitution states that "the judicial Power of the United States, shall be vested in one supreme Court." Section 2 goes on to state that "the judicial Power shall extend to all Cases, in Law and Equity, arising under this Constitution, the Laws of the United States, and Treaties made, or which shall be made, under their Authority..."

It's difficult to see the Supreme Court failing to uphold their responsibilities under the Constitution in the Obamacare and same-sex marriage cases. The justices weighed the arguments of both sides, took all facts under consideration, interpreted the Constitution as they saw fit, probed the cases made by the defendants and the U.S. Government's representatives, and rendered their judgment at the end of the process. Just because Sen. Cruz didn't like the outcome doesn't mean that members of the Supreme Court are acting like "philosopher kings."