Ted Cruz, the junior senator from Texas the entire Democratic conference loves to hate, officially kicked off the 2016 Republican presidential primary season with his March 23 announcement on the campus of Liberty University. The Houston Chronicle broke the story two days prior to Cruz's formal declaration of a White House bid, but anyone who was remotely following U.S. politics over the past year could have safely assumed that he would make good on his presidential ambitions. As the Chronicle pointed out its in scoop, "Monday's... announcement will culminate two years of open musing about running for president that began nearly the moment voters elected him to the Senate in 2012."

Cruz, in other words, has wanted this job badly ever since he made his first trip to Washington as the new senator from Texas. Moderate Republicans, Independents, and Democrats may scoff at his presidential campaign as an effort by a young and inexperienced political opportunist, but Cruz clearly believes he has at least a decent shot at the Republican nomination. And why wouldn't he? Establishment Republicans, after all, eye-rolled his 2012 primary contest in Texas, only to wake up the next morning shocked that he defeated a Republican incumbent who had tens of millions of dollars in his war chest and who seemed unbeatable.

Announcing that you will run for president, of course, is not the same as convincing Republican primary voters across the country during a lengthy campaign that you are the best chance for the party to reclaim the White House after eight consecutive years of Democratic rule. And this is where Ted Cruz will face his toughest challenge: for many Americans in the center, Cruz is far too extreme. For this large segment of the country, he's a showboater that was willing to orchestrate a 16-day shutdown of the federal government over a health care act that had no chance at getting defunded, and his views of the world make President George W. Bush look like a pragmatist.

Simply put, Cruz is not ready for primetime. There is no way he will be able to capture moderate Republicans who cringe whenever the Tea Party comes up for discussion. And, even if he did miraculously win the Republican nomination, he would be crushed by the Democratic frontrunner, Hillary Clinton, in a one-on-one matchup. 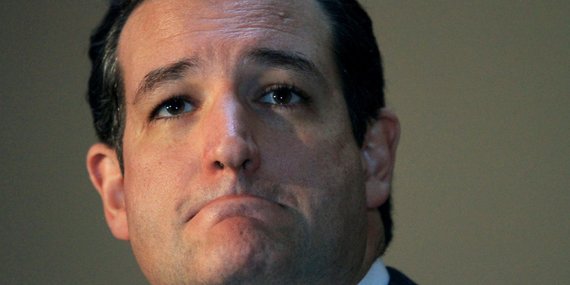 Sen. Cruz's outlook on foreign policy is particularly troubling. He doesn't appear to grasp the notion that dealing with the world requires skills beyond a passionate, bumper-sticker laced Senate floor speech riddled with the typical talking points. Nor does he appear to recognize that anyone who is fortunate enough to win the top job in the country needs to exhibit a set of characteristics that run polar opposite of Cruz's propensity for being reflexively dogmatic. As all presidents have learned throughout the Republic's history, being Commander-in-Chief often means being willing to cast aside ideology in order to keep Americans safe and serve the best interests of the country. Sometimes, that means negotiating with world leaders that are so despised and so adversarial that it makes your stomach crawl (think FDR and Stalin; Nixon and Mao; Reagan and Saddam; or Obama and Khamenei).

Take President Obama's negotiating strategy with the Iranians. Everyone in Washington, from the most liberal to the most conservative lawmaker, agrees that the Iranian Government is the world's greatest sponsor of terrorism and has shown a willingness throughout the past 35 years to kill, lock up, and torture anyone in order to keep its Islamist regime afloat. No one disagrees with that, including Obama administration officials who have made it abundantly clear that a series of economic sanctions will remain in effect as long as Ayatollah Ali Khamenei refuses to change the behavior of his regime.

But, at the same time President Obama has acknowledged the brutal nature of the country's leadership, he has made the pragmatic calculation (a correct one, in my view) that just because Iran is a terribly bad actor in the region doesn't mean that the United States cannot negotiate with Tehran when an opportunity presents itself. An opportunity just so happened to arise regarding the dispute over Iran's nuclear program -- an issue that Washington and Tehran have both concluded would best be resolved through diplomacy rather than further confrontation. This is the kind of pragmatism that is required from a President of the United States, and if Cruz's short history in the U.S. Senate is any guide to how he would run the White House, pragmatism would be in short supply during a Cruz administration.

Four days before pledging his candidacy, Cruz reintroduced a bill called the "Sanction Iran, Safeguard America Act." The legislation, 36 pages in length, would effectively forbid President Obama (and a future President Cruz) from granting any economic sanctions relief in exchange for a verifiable degradation of Tehran's nuclear capability. The waiver authority that the White House has used to provide remedial sanctions relief to the Iranians during the past 16 months -- relief, by the way, that has kept the Iranians at the table -- would be terminated; more restrictions would be put into place on Iran's automotive, energy, and banking sectors; and no funds would be authorized to implement a nuclear agreement unless Tehran met a series of demands that are either outside the purview of the nuclear talks or wholly opposed by the Iranians as unworkable (releasing all Americans imprisoned in Iran, dismantling all centrifuges, and discontinuing any ballistic missile research programs are just a few of these conditions).

This kind of legislation is fine for a junior senator to introduce. Indeed, senators can file any piece of legislation that he or she wants, even if the legislation has zero chance of getting passed. But is this black-and-white, my-way-or-the-highway approach a quality that Americans want in their president? Is choosing capitulation over negotiation a better strategy to "Safeguard America" and keep the threat of nuclear weapons proliferation from spiraling out of control? Do Americans want a Commander-in-Chief to be this closed to compromise, a trait enshrined throughout Ted Cruz's young Senate career?

Being President of the United States is the toughest, most high-pressured job in the world. The great ones in the 20th Century, like FDR and Ronald Reagan, have at times managed to deviate from their ideological predispositions in order to "safeguard" the security interests of the United States. And the country has been better because of those choices. As Ted Cruz begins his formal campaign for the same historical office, we should all question whether he will be able to go outside his comfort zone by sacrificing dogmatism for realism when needed.