Senator Ted Kennedy worked tirelessly to protect America from the threats of nuclear terrorism and proliferation and to reduce and eliminate all nuclear arsenals.

In June 2004, I had the honor of introducing Senator Kennedy as a keynote speaker at the Carnegie International Non-Proliferation Conference. He was warm, gracious and generous in his praise of our work at Carnegie. He was also ferocious in his criticism of the failed policies that had led the nation into an unnecessary war in Iraq and that had increased the nuclear threats. 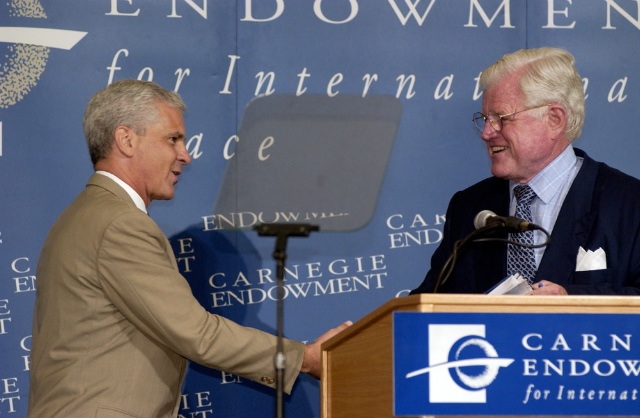 On that sunny June day, he spoke eloquently of the challenges, the failed policies, and of our joint responsibility to continue the work President Kennedy had begun. Re-reading his speech, it could have been given yesterday, not five years ago. Below, a few excerpts convey something of his power and vision and illustrate why the nation will miss his leadership on this critical issue.

[The entire speech is available here.]

We cannot simply wish away the existence of these dangerous weapons in this dangerous time. We have a duty to do all we can to work with other nations to limit, reduce, and eliminate the existing nuclear arsenals, and the sooner the better. Now, with the specter of nuclear terrorism very real, and high on the minds of every American since 9/11, this effort is a matter of the highest practical importance for our own national security.

All who lived through those traumatic thirteen days of the Cuban Missile Crisis in 1962 recall the sudden horror that gripped the nation. Families prayed for their safety. Children were taught to hide under their desks in schools, as leaders in Washington and Moscow struggled over how to avoid the mutually assured destruction that our policies in those days had suddenly made so vivid.

As President Kennedy wrote to Chairman Khrushchev after the immediate crisis ended, "Perhaps now, as we step back from danger, we can together make real progress in [the] vital field" of disarmament.

Surviving the brink underscored in my brother's mind the necessity of cooperation, even with the most difficult adversary, so that no American president would ever again be faced with the same impossible dilemma.

On Nuclear Terrorism and Proliferation

The attempt to rid Iraq of nuclear weapons it didn't have has damaged our credibility, set back our nuclear non-proliferation policy, and become one of the most serious blunders in the entire history of American foreign policy. While the Administration has focused its attention on Iraq, a country without nuclear weapons, North Korea and Iran have continued their pursuit of these weapons, and untold amounts of nuclear materials have remained under little or no security in the nations of the former Soviet Union...

Each neglected threat is an opportunity for terrorists to obtain the material they need to attack us with nuclear weapons.... The great and overwhelming danger we face in the months ahead is a nuclear 9/11, and we hope and pray that it is not already too late to prevent. The war in Iraq may well have made it more likely, not less likely.

Because we are no longer threatened by the specter of nuclear war with the Soviet Union, many have been content to put aside our drive toward nuclear disarmament. But this attitude is a mistake and a missed opportunity. We no longer stare across the oceans at a hostile Soviet enemy, but nuclear weapons still remain the greatest threat we face...

On the Folly of New Nuclear Weapons

If we build them, the costs are clear. No one will believe we are serious about nuclear non-proliferation. We are trying to persuade the world to "do as we say, not as we do," and few countries will oblige....

Some proponents of new nuclear programs in this country believe that building these weapons is acceptable, because they don't see a link between U.S. nuclear weapons policy and other countries' nuclear decision-making. This simply doesn't make sense. Each of America's decisions on its nuclear arsenal is based on our calculations of risks and opportunities around the world. The status of other countries' nuclear programs plays an important role in those calculations. No one has ever provided any evidence that other countries make these calculations any differently than we do.

On Our Joint Enterprise

Together over the last half-century, Democratic and Republican Presidents alike have pursued sensible arms control agreements and a global commitment to non-proliferation.... Many of you here today have worked long and hard and well on these vital issues. With your help, we can and will prevail in this all-important mission to prevent nuclear terrorism and to limit, reduce and eliminate the world's nuclear arsenals.

In his address on disarmament at American University forty-one springs ago, President Kennedy called us to action, urging us to "do our part to build a world of peace where the weak are safe and the strong are just." A strong and just America is the nation we need. We've lost ground in the past four years. We need new leadership to regain it and move ahead, and we don't have the luxury of wasting any time. Thank you very much.