During his halftime segment, Costas stated that if Belcher didn't possess a gun, he and Kasandra Perkins (his girlfriend and the mother of their infant daughter), whom he allegedly killed, would both be alive today.

These claims didn't sit well with the always outspoken and right-wing singer, who took to Twitter to express his vehement opposition to Costas' comments, slamming the sportscaster for blaming guns for the tragedy.

"We thought Bob Costas was smarter than that. Only fools blame tools instead of human failings. Shame Bob. Blaming guns for crime is like blaming helmuts for headbutts. WTF Costas! Uve lost it," Nugent wrote in a series of tweets, adding:

"Hey Bob Costas we all kno that obesity is a direct result of the proliferation of spoons & forks Get a clue."

Nugent is a longtime member of the NRA and is very vocal about protecting his Second Amendment rights. Following the mass shooting at a movie theater in Aurora, Colo., this past July, the 63-year-old singer wrote an op-ed for The Washington Times, advocating for "nut control, not gun control."

But Nugent is more than passionate about his right to own a fire arm. In May 2011, he told CNN's Piers Morgan that, "Anybody that wants to disarm me can drop dead. Anybody that wants to make me unarmed and helpless, people that want to literally create the proven places where more innocents are killed called gun-free zones, we're going to beat you. We're going to vote you out of office or suck on my machine gun."

CORRECTION: An earlier version of this story incorrectly stated that Jovan Belcher and Kasandra Perkins had a son together.

More celebrities who own guns: 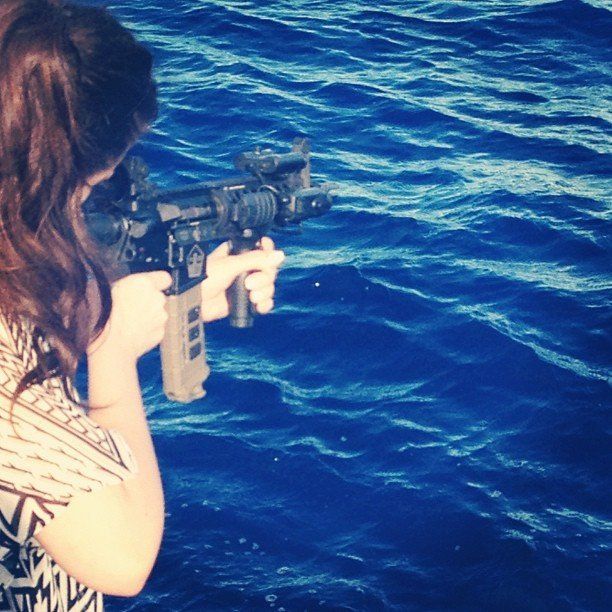 1 / 20
Khloe Kardashian
"Scott [Disick] has been wanting to learn how to shoot for a while now and didn’t have anyone to go with him, so I volunteered,” Khloe wrote on her blog.
Khloe Kardashian/Instagram