One wonders how much gall Sarah Palin can muster in the face of yet another Alaska tragedy.

In the aftermath of the fatal plane crash in rugged western Alaska that took the lives of former U.S. Senator Ted Stevens and four others earlier this week, Palin described Stevens to her sycophantic Fox News colleague Greta Van Susteren as being "an almost larger-than-life character in our great state's history."

She also created some faux "mutual" intimacy with Stevens when she posted a memorial to the late Senator on her Facebook page:

Two years ago, he sat at my kitchen table over a salmon lunch, and we talked about our long anticipated Alaska natural gas pipeline and our mutual commitment to have the Last Frontier's rich resources contribute to America's quest for energy independence.

In fact, there had been little, if any, Palin-Stevens bonding since. 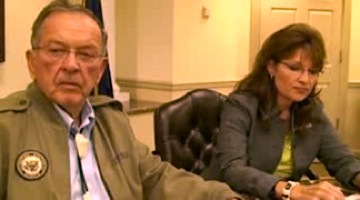 Palin can fabricate the status of her relationship with the dead all she wants. Only earlier this year she did the same with the late Wally Hickel, who told me last summer that Palin had "lost her ethical compass."

During Stevens' darkest hour -- when he was convicted by a federal jury on seven charges in October 2008 -- Palin, then running for vice-president on the GOP ticket, plunged the stiletto into Stevens' back:

After being found guilty on seven felony counts, I had hoped Senator Stevens would take the opportunity to do the statesman-like thing and erase the cloud that is covering his Senate seat.

Even though Stevens' aides begged her to back off, Palin didn't stop there. "Even if elected...," she declared, plunging the blade deeper, "Senator Stevens should step aside to allow a special election to give Alaskans a real choice of who will serve them in Congress." There were many who speculated that Palin's position had everything to do with her own ambitions for Stevens' seat. When Stevens lost to his Democratic opponent, Mark Begich, by only a few thousand votes, many Alaska Republicans pointed the finger at Palin's 11th-hour betrayal as providing the difference in the outcome of the election. They were livid.

Ted Stevens was nobody's fool. He was well aware what Palin had done to him. When I spoke with Stevens last summer in the aftermath of Palin's resignation as governor, Stevens described her as "an opportunist" and "thin-skinned." While he refused to speak on the record about his personal relationship with Palin, one got the sense that he felt profoundly betrayed by her in recent years. He clearly did not trust her. It was precisely the same sense of disgust and disdain that I felt from Hickel and other Republican Party elders whom I interviewed in Alaska over the last 18 months. Loyalty was clearly not her strong suit.

When Stevens was initially indicted earlier that year -- he maintained his innocence throughout the process -- Palin expressed her "dismay" at the charges and said the indictment "rocks the foundation of the state."

But when Palin needed the imprimatur of Stevens, she trumpeted it loudly. In promoting her controversial plan for a gas pipeline, Palin boasted that she and the senator were "singing from the same sheet of music." She had also hired Stevens' former chief of staff Steven Silver as a lobbyist when she was Mayor of Wasilla. For all her Tea Party rantings, Palin was never averse to bringing home the federal pork.

Once Palin accepted McCain's invitation to join him on the GOP ticket in August of 2008, Palin distanced herself from "Uncle Ted," as he was affectionately known in Alaska. McCain detested Stevens and the billions of dollars in federal earmarks he steered to the Last Frontier. The so-called Bridge to Nowhere that Palin denounced in the early days of her VP candidacy was a direct slap in the face of Stevens, who had fought ferociously for the federal funds to secure the building of the bridge. (When it was documented that Palin had supported the bridge before she turned against it, she was forced to abandon the claim.)

But that wasn't to be Palin's final two-step involving Stevens. When Attorney General Eric Holder, citing evidence of prosecutorial misconduct, dismissed the convictions against Stevens in April of 2009, Palin twice declared in emails to Alaska journalist Rena Delbridge that she believed that Begich should resign and that a special election should be held.

Her spokesperson Meg Stapleton reiterated Palin's position: "Stepping down to hold the special election would be the right thing to do."

A short time later, Palin denied making such an assertion. "I didn't call for Begich to step down, either," Palin said in a press conference subsequent to the emails. When Alaska journalists pressed her about the emails proving otherwise, she accused them of "splitting hairs."

It was classic Palin doublespeak. Like the Bridge to Nowhere, she was for Begich stepping down before she was against it. When it came to Ted Stevens or anyone else in Alaska politics, it was always Sarah Palin first.