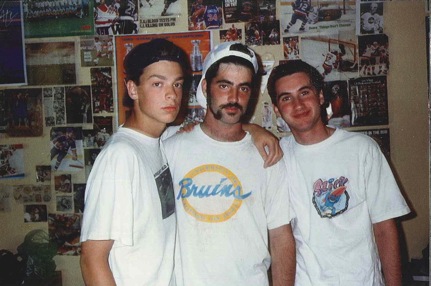 The night before the crash on May 15, 1990. Photo credit: Joshua Prager

On May 16, 1990, a careless truck driver hit a bus and broke my neck and left me quadriplegic. I was 19. Eventually, half of me returned to form -- my left side never quite catching up to my right -- and I rose from my wheelchair, walking with a cane through my 20s and 30s, slowly reconciling to my lot, to a body and life that were permanently divided. 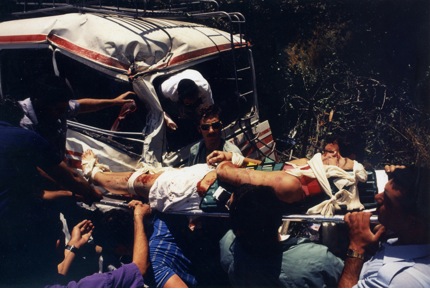 To know the medical facts of my circumstances was a help. So, I read the thousand pages that documented my four months as a patient. To chart the emotional aftershocks of the crash was more important still. And so, I wrote and wrote, liberated when last year, after many stabs at understanding, my desultory notes at last cohered into the pages of a little book titled Half-Life.

Despite the catharsis, however, one unpleasantry lingered, uncharted. It did not concern my body. It was of my mind -- the fleeting visions of bad things, like a face-first fall on a sidewalk, that every few months made me wince. I chalked them up to the vague vulnerability I had felt since the crash. 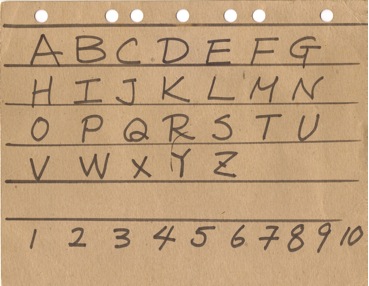 The alphabet chart I used to try to communicate when I was a quadriplegic. Photo credit: Joshua Prager.

I remember well the first of my imaginings. It was a full-blown hallucination and came upon me nine nights after the crash as I lay attached to a respirator. I looked down at my palms. Fastened to each was a brace, a simple curl of plastic that prevented my spastic fingers from becoming contracted. The braces appeared to me to be the cardboard centers of toilet paper rolls. I wondered why I was holding them. I wanted to let go of the hollow tubes, to have my fingers free. Unaware that I could not move, I tried patiently to release them. But they remained in my grasp. And unaware that I could not speak, I resolved to ask a nurse for help. After a long wait, I saw, over my feet, a nurse coming toward me and told myself, she is almost here, tell her to unfurl my fingers, to have me let go of these tubes! But when she arrived, I could not speak and did not accomplish my task. I began to sweat. I tried to assess my failure. I posited that my inability to let go of the tubes was a compulsion. But I could not fathom why I hadn't been able to enlist the nurse to help me do so, and spent many minutes preparing for her next arrival so as to not let another opportunity pass. When at last she returned to my bedside and I failed again to have her do this simple thing, I grew desperate as she readied to leave. Don't go! Wait! My hands! These tubes! What is wrong with me?! And so, looking up at a clock that did not exist, I sweated and plotted for hours, again and again failing to do this simple fucking thing, mindful all through the worst night of my life of a phantom, a large black man sitting behind a pane of glass in a small room to my right.

"Pt awake but agitated," noted my nurse in her log, "with non focus appearance to eyes prob re to drugs."

It was indeed drugs that had clouded my eyes. I had been given heavy sedatives, among them Midazolam, to keep my head and neck still. 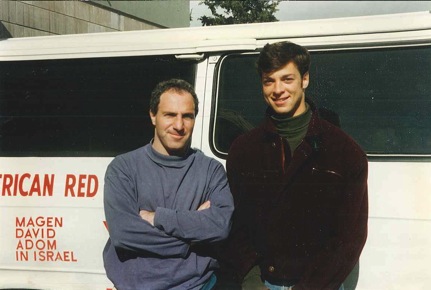 Meeting the paramedic in 1995 who removed me from the crash. Photo credit: Joshua Prager.

The aftereffects of those sedatives had also clouded my brain. But it was not until last month -- 23 years later -- that I considered that my visions in the intensive care unit were related to the visions that had come upon me, off and on, in the years since. 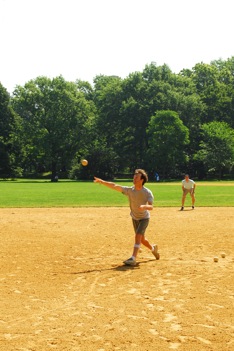 It was an article in the New York Times that prompted me to connect the two. Titled "Nightmares After the I.C.U.," the piece noted that prolonged stays in an intensive-care unit can cause symptoms of post-traumatic stress disorder including "intrusive thought" that will linger in a former patient. And the most frequent link to such problems was sedation by benzodiazepines, the same class of sedative prescribed to me. Such drugs intensified hallucinations that in turn bred PTSD.

I had not known of the possible long-term negative effects of the drugs. But I had hated them just the same. For their immediate negative effect -- amnesia -- had taken from me, drip by drip, the memory of seven days.

I had long since filled in the gap best I could, reading my patient record. And it was validating to read in the Times that that is exactly what several hospitals have recently begun encouraging patients to do, namely to read a simplified version of their daily charts "as a realistic counterpoint to [their] hallucinations or amnesia."

Years after I was subject to both, a class of drug I have long disdained is now being reconsidered. There are great costs to meddling with the brain. True memory, even of torment, is precious. 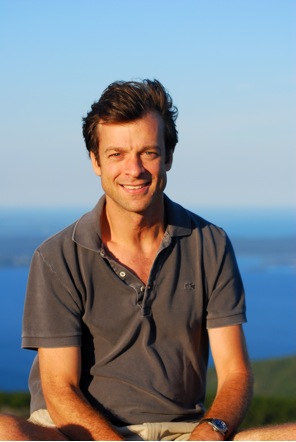 A photo of me this year. Photo credit: Michael Train.

Sometimes it takes years for the medical establishment to learn what the patient knows intuitively.

Joshua's latest book, Half-Life, is available on Amazon and on his website.