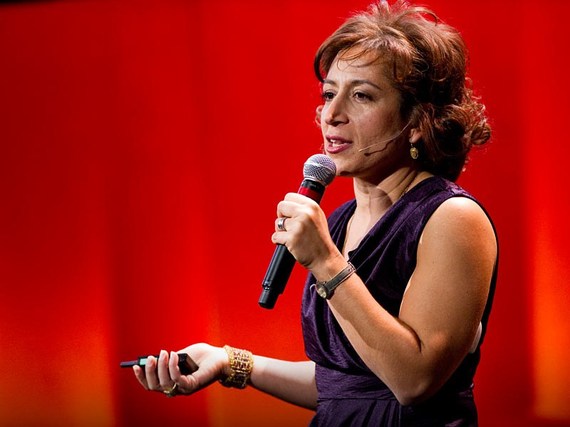 When Hanna Rosin, the first speaker at the very first TEDWomen conference in 2010, delivered her talk entitled "The End of Men," she had only just begun doing the research for what became her nationally bestselling 2012 book by the same name.

And as the editors at The Guardian pointed out in a recent editorial, even though women are rising to the top in the US (Hillary Clinton), UK (Theresa May or Andrea Leadsom) and the UN (Helen Clark), "women's leadership in politics, as well as in business, is not yet normal. But it is becoming normal." Indeed, if Hillary Clinton is elected president and puts her 50% female cabinet in place, American women will see true representation proportional to population for the first time ever in a White House cabinet.

But as The Guardian editors cautioned in that same editorial, we shouldn't make the mistake of allowing the "representation to be taken not as a victory, but as the victory." We still have a long way to go.

Indeed, when Rosin's book came out in 2012, it received much praise, but also some reductive criticism that mostly revolved around its title. NPR's Annalee Newitz wrote in her review of the book, "fundamentally, The End of Men isn't about men at all; it's about the rise of economically powerful women."

As Rosin explained in both her TedWomen talk and in her book, the big story for women in the 21st century is that more education (for every two men who graduate from college, three women graduate), more leadership opportunities (women make up more than 50% of managers in the workplace) and more economic security (younger women are out-earning their male peers) mean that women can make choices in their lives with more freedom than ever before.

Since her TEDWomen presentation, Rosin has appeared on The Colbert Report, become the co-host of Slate's excellent DoubleX podcast in which Rosin and her cohosts, writers June Thomas and Norene Malone, "discuss things women want to talk about and men want to eavesdrop on," and continued writing award-winning articles on a variety of topics, including the secret lives of teenagers and challenging modern parenting practices.

This summer, Rosin herself did something rather daring that may be the best example yet of the type of opportunities that economically-powerful women have these days. After 20-plus years of writing for a living, she decided to make a leap and accepted a job offer in a field in which she had no previous experience. Rosin is now one of the hosts of NPR's very popular award-winning Invisibilia podcast series. Having never been a radio journalist before, the move presented a number of challenges for Rosin. She wrote about them earlier this summer in Lena Dunham's Lenny newsletter in a piece entitled "Screw Mastery."

While getting outside her comfort zone was hard, Rosin noted that the pay-off of, as she put it, "of dropping back to zero" and forcing yourself to learn new things, even in your 40s, made the successes that much sweeter. She wrote,

I learned a ton of new things about myself, in the way you can only do if you are f--king up daily. I learned that I am defensive but trainable. That I have capacity for patience but that my immediate default is speed, bluntness, and ironic distance. That although I am used to working alone, I will happily collaborate. And that I really like working with women, even if they cry more during the day."

The support system of having women in leadership positions mentoring her at Invisibilia has made all the difference for Rosin. She writes, "I got a lot of help. The people I work with taught me things the way you teach a kid to ride a bicycle -- they were right on top of me, day after day. Still, nine months later I listen to the shows we produced and I can completely recognize them as my own."

Read more of Rosin's essay at Lenny or watch her 2010 TedWomen talk.

TEDWomen 2016 continues a journey that began in Washington, D.C., in 2010, the first major TED conference to focus on the ideas, stories and global narrative of women and girls. The response was overwhelming! Our speakers, both women and men, have come from many different backgrounds and experiences to share ideas and stories in TEDTalks that have been viewed more than 60 million times on TED.com.

Our theme for TEDWomen 2016 is "It's about time." We will be exploring how time and attention shape our very lives. In theory, we've all got an equal amount of time -- 24 precious hours in a day -- and yet, our capacity to harness the most out of it is wildly different depending on our circumstances and state of mind. Together, we'll plot how to push the tipping points even faster and move even slower when it comes to the things we most want to savor and care about.

If you're interested in being present for these TEDTalks and many more on this year's theme, there are still a few spaces left to attend TEDWomen 2016. (After the theater is completely sold out, we will also offer some discounted tickets for simulcast viewing.) We will announce our speaker lineup next week - find out more and register at TED.com.