When Leah's parents announced they were divorcing after 28 years together, the teen slid into a depression that became increasingly severe. Here, in the final chapter of our series on families with children with a mental health issues or learning disabilities, Leah, now a college freshman, her mom, Jennie, a speech language pathologist, and her dad, Jeff, a physician, describe how they coped with the dissolution of a marriage and Leah's serious depression together, as one.

The Divorce
Leah: When I was around 12 years old, I noticed changes in my parents and how they acted around each other. I knew something was different. It felt cold in the house. Then in 9th grade, they got divorced. It wasn't really a surprise, but it made me feel so sad. Everything was changing.

Jennie: There was a lot of anger on Leah's part. She can be extremely funny and vivacious, she's very quick witted, and that was all diminished.

Slipping Fast
Jennie:Leah had been sad for a while, but in the summer after 10th grade, she started to really fall hard. We had gone through adolescence with our two [older] boys, but this was much much worse. We couldn't write it off as a phase.

Leah: Nothing felt right. I just wanted to stay in bed. I tried to get out of things as much as I could and if I had to do [something], I would just be going through the motions.

Jeff: She's very athletic -- she plays tennis -- but there was a drop in competitiveness and desire.

Leah: I became closer to my boyfriend at the time, and we talked a lot about how I felt and everything I was going through. I spent more time with him because I didn't want to be home, and I kind of dropped my other friends. They knew something was wrong, they just didn't know how to approach me about it. But my academics were fine -- if anything, they were better.

Getting Help
Jeff: There was a point where Leah said to me, "Dad, I am having difficulty." We had seen that on our own, and we had had conversations about it, but then she asked for help. And we jumped on it.

Jennie: Jeff, [who is a physician], did the research on finding a psychiatrist who would fit with our philosophy. We wanted to bring Leah to someone who would really spend time with her and with us. We were very worried that a physician may prescribe too readily.

The doctor [who works with The Child Mind Institute, which helped orchestrate this series] spent time with Leah one-on-one, then additional time with me and Jeff, then all three of us together. He understood our hope that if Leah were to be on medication, we wanted it to be for a short time, and carefully administered.

Our Care Map
Jennie: Leah was prescribed an antidepressant, and took charge of it herself. She lived in two homes, so she was responsible for bringing it back and forth.

Jeff: The medication was an adjunct to cognitive behavioral therapy, which Leah did on a weekly basis for close to three months, about 45-minute drive away. She spent time with the therapist, alone, which was very, very helpful for her. We also followed up with the initial doctor roughly once every month or so to talk about things, and to to adjust medications, but we mostly worked with the cognitive behavioral therapist. Leah was on the medication for approximately a year.

Leah: I noticed changes right off the bat. The medicine definitely helped, and the therapy let me talk out my feelings. I had been talking to my boyfriend, but the fact that the therapist was labeled "therapist" helped me. The doses of the medicine got smaller and smaller, and I basically got off it on my own. From the beginning to the end, I was really in control, which I appreciated.

The Darkest Time
Leah: For me, the very beginning -- before any therapy, before I was on any medications and when no one knew what was going on -- was the hardest. It all seemed like such a blur. I was talking to my mom the other day about her dog, and she was reminding me of when she was a puppy, which was in that time before therapy. I don't remember the dog being a puppy at all. I think I've blocked out a lot of things that happened during that time.

[But] I don't feel like I'd do anything to change the past. I am comfortable with what happened.

Jennie: Me too. Jeff and I had so recently divorced [when this began], and both of us spent a lot of time thinking, Had things been different ... had we still been a family, would Leah be going through this? There's no answer to that. But I kept thinking about what we had potentially done by separating.

The Future
Leah: Today, I'm going to college -- I just finished my first year. I'm hopefully going to be a psychiatrist when I grow up. I haven't talked about my experience [with my classmates] yet, but that's because I'm in big classes. I'm not going to be the type of person to raise my hand and tell everyone!

Jennie: When you go through something like this, you don't know that you're going to get out of it, but Leah has. She continues to grow. Her dad and I are really proud of her. She's done well at school. Her athleticism is back, her intrigue with psychology and psychiatry is there. She fell, and she fell hard, but she's come back to who she was in a more mature, a stronger way.

Leah: I've definitely heard about relapses. When I started school, I was nervous, because I was away from home, it was my first year of college and everything was changing again. But [this has all] made me mentally tougher. I feel confident about the future. 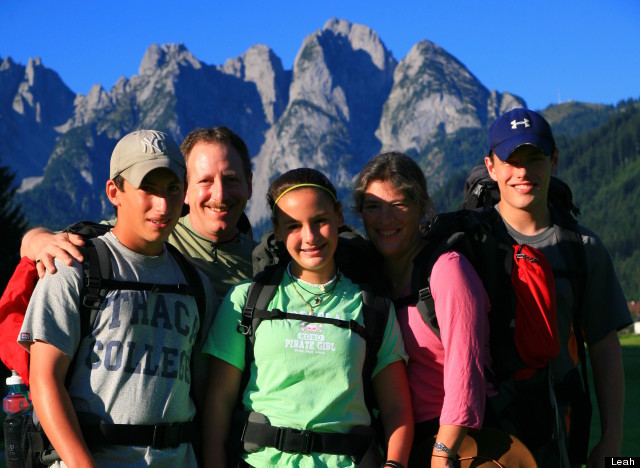 Leah, her two older brothers, and their parents.