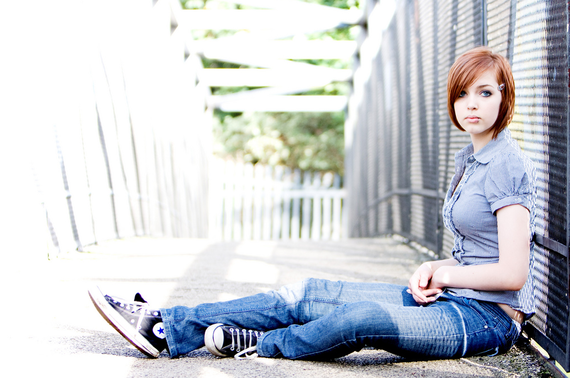 Notice how I used the word "connect" over motivate or inspire? For those of us parents and educators in the field of teen advocacy, it may be easy to forget that before we can motivate and inspire teens to reach their potential we actually need to find connection with them first.

Along with having my own teenager at home, I've had the privilege of working directly with teens across numerous school environments for nearly two decades here throughout Los Angeles. The many hats I've worn along this journey range from teaching high school students and after-school tutoring, to facilitating their peer to peer workshops and debates on race and diversity, -- to administering juvenile probation re-entry initiatives, school detention programs and mental health services for those students needing support beyond the classroom.

However my favorite hat will always be as mentor, cheerleader and advocate for their quest and command for the prize of higher education. Through this road traveled I've acquired perhaps the most important basis for enriching their academic and emotional development - namely - they are just as much my teacher as I am theirs. Building trust and connection with teens begins with a mutual recognition that we are both invested teachers and learners in their growth process.

5 Essential Ways to Connect with Teens (for Parents and Educators)

1.) Maximize Their Interests. For some teens it's all about athletics or the performing arts - for others it's about socializing with their friends or XBox Live. Creating an avenue for discussion around their interests within a safe and supportive environment can create larger discussions about related long term interests which should be taking place during these formative years. It's OK if they don't know what they want to do yet (odds are career aspirations may shift even when they do), but do encourage them to share on what they know they like to do now.

For example, Pixar in a Box - a joint venture between Khan Academy and Pixar Animation Studios was launched last fall to offer free online videos and lessons that also create a pathway toward a career in animation. Their goal is to show students how the concepts learned in school are used to tackle creative challenges faced during the making of Pixar films. As a parent with a teenage artist who loves sketching and animation, yet struggles in math - this online resource resets the stage for acquiring math concepts in a setting that holds her interest! Win-Win!

2.) Provide Resources for Engagement. With resources in tow, allow them to steer their own course. When provided access, teens and their ability to navigate and maneuver social media and YouTube can trump most adults who still remain perched over on Facebook. Point them in the direction of pathways toward their own enrichment, and then see what sticks.

TeenLife.com is the largest online search engine for academic and experiential learning opportunities for teens. The site lists nearly 15,000 summer programs, gap programs, community service opportunities, schools, colleges, and independent advisors for students in grades 7-12. TeenLife also publishes print and online content through daily blog posts, monthly newsletters, six annual flagship publications, and virtual events. Their mission is to make it simple for teens (along with their parents and educators) to develop a meaningful personal experience portfolio, no matter the makeup of their individual interests, talents and resources. Consider attending the next TeenLife LIVE Virtual Fair on January 31 from 12-6. For more information, go to TeenLife.com.

3.) Facilitate Don't Regulate. To some this may seem a radical approach. He's just a teenager! If he fails this course, what about college?!! He's not ready to face real world consequences yet! Yes and no. By the time our youth become teenagers, many are well aware (often times more so in today's social media climate) of just how challenging the so-called "adult" world is. By facilitating their ability to take risks and at times fail, seek out new challenges, and consciously assert their own voice we provide them with the tools to succeed over a lifetime.

4.) Set Boundaries (with realistic borders). Along similar lines of "facilitated" learning, teens need to be afforded the opportunity to confront boundaries, consequences and ultimately reach the ability to compromise. Helicopter parenting or micro-managing their every move isn't actually preparing them for the real world. Yet without any boundaries, teens may find themselves unprepared for the structural order that comes via the job market after high school and college.

My daughter is free to tell me when she doesn't like boundaries around her phone usage or staying up too late on school nights. But by now she knows my general response: "It's actually not a requirement that you like these rules I'm setting -- but you still need to follow them. If you don't, there will be consequences. However, while not everything is up for negotiation, when possible, we can work together." (The majority of the time, this approach works - but in truth there are occasions, when the parent card is inevitably pulled out.)

5.) Highlight Their Positives (Not Only the Negatives). Silver linings reign supreme! In whatever endeavor your teen is attempting on their road to success, don't forget to support their making the effort. Ultimately we want our teens to blossom into confident, independent-thinking young adults. By extending a touch of grace and positivity during their most difficult periods, we allow room for their willingness to remain connected with us - especially during those times when we may be at odds with one another.

Teen advocacy may prove challenging, but also prepare to be inspired. It's rewarding to witness teens soar when offered the appropriate prescription of encouragement and boundaries to follow their pursuits. Approaching teens collaboratively - is key to not only building ongoing dialogue with them, but plants the seed for their giving back and mentoring the generation coming up behind them as well.

This article originally appeared on Literatigurl.com