On the wrong side of the law, but a hero by almost any other measure.

That's the short story of Jamal Rutledge, a 17-year-old who saved the life of a Florida police officer in September, when he called for help after the officer clutched his chest and collapsed while booking Rutledge into jail. The teen, and several responding officers, will be publicly recognized at a ceremony Jan. 21. 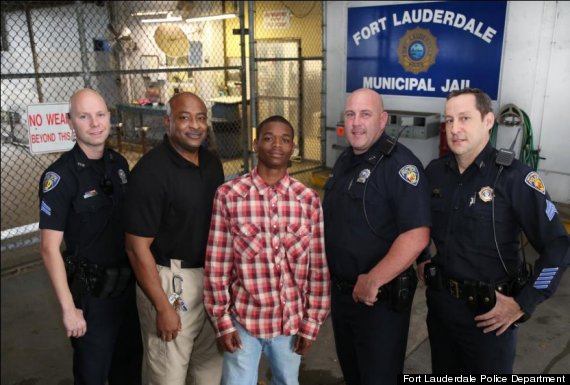 Rutledge approached the officer, realized the severity of his condition and "immediately began to kick the security fence and yell to alert officers in the area," police said in a statement.

Sgt. Todd Bunin heard the commotion and responded to the scene, then radioed for help from Fort Lauderdale Fire Rescue. Meanwhile, two other officers, Robert Norvis and Raymond Ketchmark, began performing CPR and applied an AED to Foulks' chest.

The Sun Sentinel reports Rutledge was arrested in September for violating his probation on charges of criminal mischief and burglary.

Watch the full surveillance video, below. Incident begins at 37:55.