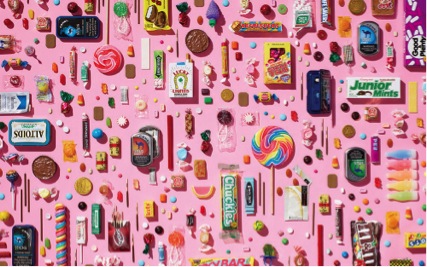 Remember candy cigarettes? Those chalky sweet sticks that kids used to play with and then "smoke" to mimic their cool older siblings or parents? It is easy to see why today's kids might have a tough time discerning which products are candy and which ones are the real deal. Emerging tobacco products like Camel Snus, Orbs and Strips, Marlboro or Skoal Sticks are packaged like candy, feature flavors like Frost (mint), Mellow (honey) and Spice (cinnamon) that can freshen your breath like Tic Tacs. Add to those inexpensive cigars and aggressively marketed electronic cigarettes that come in a wide variety of flavors including chocolate, strawberry and banana, and you have a veritable tobacco sundae that can pack an addictive punch for those who are lured to their colorful branding and appealing flavors.

Kids who enter most convenience stores see a lot of these products straight away -- they're often right at eye level behind the cashier, beyond their grasp, positioned like forbidden fruit. Nearly 90 percent of U.S. adults who smoke began as teens and 1 in 3 youth smokers will eventually die from a tobacco-related disease. It's an addiction that robs us of more than 440,000 lives, $96 billion in healthcare costs and an additional $97 billion in lost productivity costs each year. While Big Tobacco is restricted from marketing directly to youth, their business models have always relied heavily on youth initiation. For good reason, public health advocates are concerned about these new products because candy-flavorings have long been appealing to kids. These flavored products can serve as breadcrumbs to Hansels and Gretels coast to coast, starting them down the garden path to becoming lifelong tobacco customers. By the time they reach their 20s and 30s and decide to quit, it will hardly be like taking candy from a baby. Research tells the tale: nearly 70 percent of smokers want to stop, but only 6 percent succeed every year.

While combustible cigarettes no doubt are the worst offenders in terms of cancer risk, disease and death, old-fashioned smokeless tobacco or "chew" can also cause a long list of disfiguring and deadly oral cancers. New smokeless tobacco products like dissolvable toothpick-like tobacco sticks or lozenges skirt clean indoor air laws. Research has not yet concluded the depth of their health risks.

With their developing brains, science confirms that teens are especially susceptible to nicotine addiction and these products may serve as gateways to other forms of tobacco, marijuana and other drugs. Receptors in the adolescent brain are quickly hijacked by nicotine -- what the late former Surgeon General C. Everett Koop likened to heroin or cocaine in terms its addictive qualities. That's why all candy flavorings in cigarettes but one - menthol - were banned by the US Food & Drug Administration (FDA) in 2009. For years now, the FDA has been considering whether to ban menthol too. While its scientific advisory committee found several years ago that public health would benefit if menthol were banned, the FDA has unfortunately continued to drag its feet, announcing just last month another lengthy procedural hurdle before moving on to actual regulation.

The current science base was ample enough for the European Union to announce last month that they plan to ban menthol and all other flavorings in cigarettes that will affect its 28 member nations. A broad swath of the nation's foremost public health leaders has called on the FDA to follow suit. Why? Because the youngest smokers smoke menthol cigarettes at alarming rates and they have taken an especially burdensome toll on the African American community. An astonishing 82 percent of all African Americans who smoke, smoke menthol cigarettes.

Inexpensive cigars are popular with teens as well. Unlike cigarettes, cigars are still available in candy flavorings and are sold in small, inexpensive packages that are more affordable to teens. While cigarette smoking among teens has declined over the past decade, cigar use has increased in recent years among high school students, likely in part to their lower cost and attractive candy flavorings.

Then consider the cigarette's trendy new cousin -- the electronic cigarette -- another new kid on the block with appealing bells and whistles. You can buy e-cigarette nicotine cartridges in many candy, fruit, and alcohol flavors, charge the devices like cell phones or dispose of them altogether. Some can be bought for less than ten bucks at convenience stores but with chemicals like propylene glycol, the jury is still out on what long term health risks they might pose to delicate lung tissue.

Are all these products better or worse than old-fashioned cigarettes? While products that do not burn tobacco are less risky, there is the danger their users will graduate to or use them alongside their more lethal relatives that burn regular and mentholated tobacco -- cigarettes, cigars and hookah. The newer products have unknown risks and require more research. Meanwhile, the public -- kids included -- serve as guinea pigs until we know for sure.

Tobacco use has become a social justice issue, as the 44 million Americans who continue to smoke are increasingly among the least educated, and who can least afford to buy these products or obtain the best treatments for their cigarette addiction. The good news is that teen cigarette smoking is at an all-time low and teens are especially impacted by increased pricing and bold counter-marketing campaigns that tell youth the truth® about Big Tobacco and the ingredients in their products. But these reductions can easily be reversed, requiring vigilance on the part of the public health community. Leveling this playing field is a constant battle as Big Tobacco's marketing machine spends nearly $9 billion annually in the US alone to market those products to potential customers.

That comes out to $24 million a day. Putting corporate profits ahead of people and public health is costly and wrong. And it's certainly not child's play.