Whilst most teenagers appear to be overly obsessed with the latest version of the iPhone, one young woman nicknamed Greenleaf is making a valiant effort to bring attention to the issues of global warming. This courageous 16-year-old is taking a stand against climate change by tree sitting in a valuable grove of ancient trees near Trinidad, in Humboldt County. The trees are in danger of being clear-cut by Green Diamond Resource Company who owns the land. Activists have named the 80-90-year-old tree Greenleaf occupies Neptune, and she may well be the youngest person to ever have undertaken this form of direct action. Greenleaf has been "sitting" in Neptune for 3 weeks, sometimes taking short breaks to visit home, but when we spoke her feet had not touched the ground for 4 days. 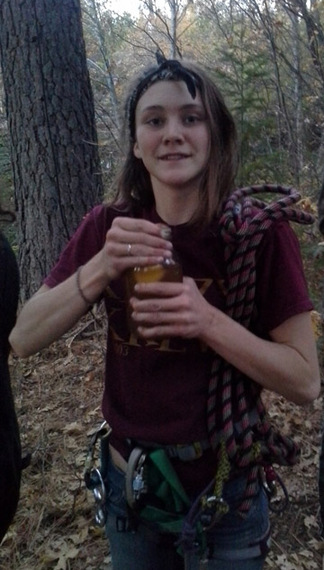 Perched about 130 feet off the forest floor her tree house is built of a sky net and two platforms covered with tarps. She has room to move around and free-climb the tree although for safety reasons she is always tied to at least two points even whilst sleeping. Her ground support, which includes her parents, Trinidad Tree Sitters, Friends of Trinidad Forest and a 501c3 non-profit called Sol Communications, deliver food to Greenleaf and other tree sitters. The supplies are hoisted up via a pulley system. She has a small camping stove to heat food if needed. Unceremoniously, she goes to the toilet in a bucket, which is then lowered to the ground crew for disposal. During the day, Greenleaf reads, writes and listens to the radio singing along to the tunes which hikers, passing by underneath, can hear her on the way to Strawberry Rock.

Greenleaf says she does not get cold as she can snuggle down in her sleeping bag and wear a hat, but she mentioned that some people do get tree sick from the swaying of the tree, just like seasickness. Although so far the weather has been fairly temperate, Greenleaf seems unperturbed by the forecast of rain in the coming week when the tarp may come in handy! 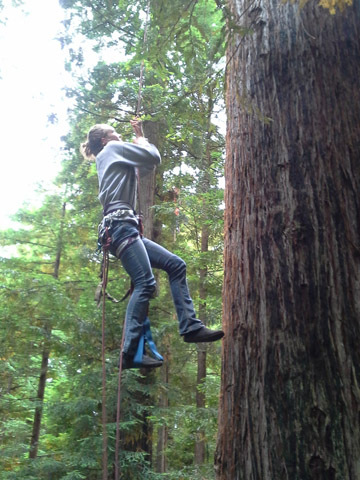 The grove of trees in question is near Strawberry Rock, a site held to be sacred by the local Yurok tribe, and is located on approximately 1,200 acres of Redwood temperate rainforest. The area has already been clear-cut by Green Diamond whose intention it is to continue to clear-cut another 84 acres of stands of trees some of which are reputed to be 100 years old, and to do "selection" logging on an additional 25.5 acres. Clear-cutting not only has a devastating impact on wildlife but also contributes to global climate change. It is an ecological tragedy.

Although Neptune is not directly threatened as yet, Green Diamond does not seem to have any moral code of conduct when it comes to logging ancient trees to turn them into decks and patio furniture! Somebody is going to have to explain to me why decking and chairs are more important than preserving pristine rainforest and ancient trees. Economics I understand. Of course, there is the issue of jobs in a time of economic uncertainty and falling employment but assuming that at least some of the loggers have children, having air to breathe, food to eat and clean water to drink may trump the need to make money out of logging old growth forests.

When I asked Greenleaf why she was undertaking such an action she said, "It is our debt to the forest to protect it and if no one else is going to stand up then I have to. If I can get more children to be involved, then it will have a big impact on the adults." Profound words indeed. Greenleaf is part Blackfoot and has grown up around Native American tradition regularly attending sweat lodges and other ceremonies. The indigenous tribal peoples have been warning us about catastrophic climate change for many years, much to our detriment we have been ignoring them and all 97 percent of climate change scientists who recently issued a statement about our current dire situation. According to the Center for Biological Diversity, clear-cutting is "the most CO2 spewing logging method of them all" and is "devastating to wildlife, habitat and water quality."

As I watch news coverage of the Filipino climate chief, Yeb Saño begging participants in the Warsaw Climate Change Conference to "stop the madness," and see dead children's bodies covered in tarps -- the victims of Super Typhoon Haiyan, I have to wonder what it will take for our governments to finally get off their indecisive behinds and act swiftly to mitigate the eco-disasters. Refusing to clear-cut forests like Strawberry Rock might actually be a start! We must protect undisturbed forests, which are crucial to a healthy climate instead of continuing the destructive practices of deforestation. If we continue to clear-cut at this rate, we will increase the rapidity and severe consequences of global warming, and that will soon come home to roost in our own backyards. It will no longer be so easy to dismiss the consequences of actions like clear-cutting when the West is increasingly hit with the environmental devastation. Sticking your head in the sand and thinking that climate change won't happen in our lifetime or won't affect us is short-sighted, to say the least. It will. It is here, and unless we dramatically change our attitudes, we will face the devastating consequences.

We have to take personal and local responsibility as our elected governments do not seem to be up to the challenge. Ending clear-cutting is one step we can take. Unlike the governments of the world, at least some of our visionary children are apparently leading the way.