On a sweltering day in Philadelphia, Pennsylvania, 14-year-old Nia Carter took me on a tour of the RV she and her family have been using to travel the country for the past three months. But this is no family vacation. Nia and her family are the founders of the group Black Men For Bernie, a grassroots organization that mobilizes the black community around progressive issues and candidates.

It all started last year when Nia's 17-year-old sister, Nadia Crawford, saw a message about Bernie Sanders on social media.

"It was actually in my feed in Twitter," Nadia says of the message that turned her on to Sanders. "I was just scrolling and I saw it."

Nadia looked up Bernie's policies, and she liked what they saw. She isn't old enough to vote, so she decided to try to convince her mom, Jackie Crawford, to vote for him in their state's primary.

That wasn't good enough for Nadia. She started telling her mom about Bernie's policies, his involvement with civil rights, and how what he stood for would be good for the black community. Her mom was convinced. Then they went home and both told Nadia's dad, Bruce Carter, about Sanders.

"And he went for it," Nadia said. "I didn't know that what I was saying to my parents would explode this." 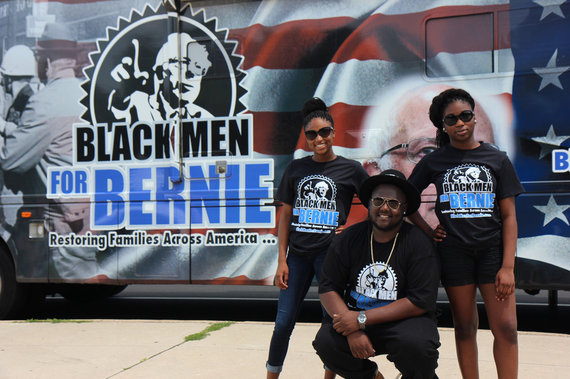 By "this," Nadia means an 8-vehicle caravan, thousands of Facebook fans, and throngs of cheering Bernie supporters wherever they go. Her dad even got to sit down with Bernie Sanders earlier this year.

It's not the first time the family has taken one of their kids' ideas and run with it. Bruce and Jackie have also helped their daughter Nia start her own event promotion business. Jackie says it's about showing, not telling, teens how to make change.

"I wouldn't say we're a normal family, and I'm glad we're not the typical family" Jackie said, sitting next to her kids on the couch of the Black Men For Bernie bus. Nadia groaned.

"No we're not the typical family, but you're making us sound crazy," Nadia said.

Look, if I told my parents who to vote for, they might think about it, but I don't think it would really change their minds. And they definitely wouldn't get eight cars decked out with Bernie's face and take off all over the country.

At heart, Black Men For Bernie is still a family operation. Nadia, Nia, and their close family friend -- practically an adopted brother, 21-year-old Jeremy Davis -- travel the country trying to convince young people to get political.

"If we start them now and they are educated on how the political process works and how to pick the best candidates for them, by the time they turn 18 they will care and be energized to vote," Davis said.

Of the three kids, Jeremy is the only one who will actually be able to vote this election cycle. He says he's not sure who he'll vote for now that Bernie is out of the running, but he'll keep fighting for what Sanders stood for.

"Because that's what's most important. Not who becomes president, but that the issues we're fighting for get accomplished."