A pair of Moscow teenagers were detained by police this week for allegedly decapitating a homeless man with a saw and ax, reports say.

Russian tabloid Komsomolskaya Pravda reported Monday that the two teens had been intoxicated when they attacked the homeless man. One of the teens allegedly cut the man's head off, then scalping it and kicking it around like a soccer ball with his companion.

The newspaper writes that the teenagers kicked the head until it landed in a trash can. They reportedly left it there and returned home to sleep. RIA Novosti reports the head was "taken away by a garbage truck in the morning."

In a statement on its website this week, Moscow's Investigative Committee confirmed that a man's decapitated body had been found Monday, adding that law enforcement officials had arrested the two suspects after following a trail of blood that led from the crime scene to the teens' apartment, where a saw, an ax and bloodied clothing were discovered.

Despite initial reports, an Investigative Committee spokesman cast doubt on claims the suspects played soccer with the man's head after the decapitation, telling MetroNews.ru that a "full picture" of what happened has yet to be established. He did, however, say the man's head may indeed have been scalped.

According to RIA Novosti, the suspects could face up to 15 years in prison if convicted of murder. 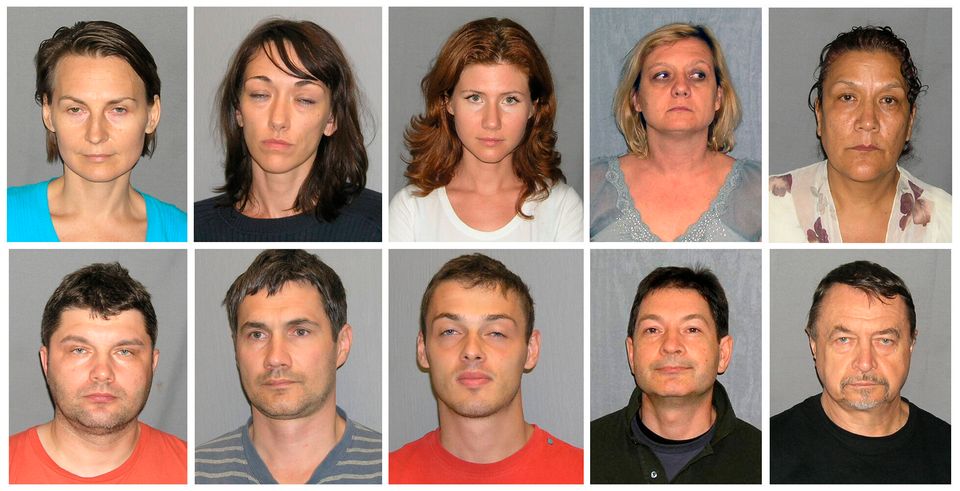 1 / 4
The Anna Chapman Ring
These Russian spies lived in suburban U.S. homes and worked at jobs like real estate brokers or travel agents, quietly inserting themselves into American life and trying to penetrate U.S. policy circles. Court papers said Chapman and nine others assumed the identities of people who had died, swapped bags in passing at train stations and communicated with invisible ink and coded radio transmissions. After their 2010 arrests, all 10 pleaded guilty to spying charges. An 11th man was arrested in Cyprus but jumped bail. Dubbed a femme fatale, the red-headed Chapman, 28 at the time, became the most notorious member of the ring, partially because of glamorous photos she posted on social networking sites of her international travels. She has stayed in the limelight since her deportation to Russia, hosting a reality TV show, modeling lingerie and becoming the face of a Moscow bank. <em>This combo of ten undated booking photos provided by U.S. Marshals on Thursday July 29, 2010 shows from top left, Cynthia Murphy, whose real name is Lydia Guryev, Patricia Mills whose real name is Natalia Pereverzeva, Anna Chapman, Tracey Lee Ann Foley whose real name is Elena Vavilova, Vicky Pelaez, and bottom, from left, Richard Murphy, born Vladimir Guryev, Michael Zottoli whose real name is Mikhail Kutsik, Mikhail Semenko, Donald Howard Heathfield whose real name is Andrey Bezrukov and Juan Lazaro whose real name is Mikhail Vasenkov. The FBI arrested the ten on June 27 charging them with acting as unregistered foreign agents for Russia. All pleaded guilty to conspiring to act as an unregistered agent of a foreign country. (AP Photo/U.S. Marshals)</em>
AP