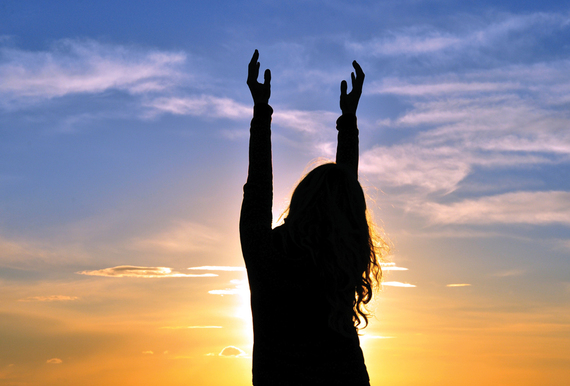 When you think of teens today, "religious" might not be the first word that comes to mind. A common perception might be that teens are too shallow to embrace something as complex and introspective as spirituality.

But why is this? The teen years are a time for self discovery on a deeper level. Shouldn't religion be a part of the discussion?

According to the Pew Research Center, young millennials (people between 18 and 24) are much less religiously affiliated than older generations -- about 36 percent are religiously unaffiliated. This group is sometimes called religious "nones."

But young adults also approach religion from a different perspective than adults. Many practice their religion in ways that stray from the specifically defined rules of organized religions of older generations. For some, religion is less about the ceremony and more about being thoughtful and spiritual.

"The Jewish faith is important to me because it gives me a sense of belonging and comfort that there is a higher power looking over me," Homewood-Flossmoor junior Sarah Weiner said. "There are some strict rules that can go along with being Jewish, such as keeping kosher. I do not keep kosher, as a personal choice. I don't agree with the idea that you need to follow every little rule in the book to be a part of a faith. Not to say that I have anything against those who do keep kosher, it's just my personal choice."

Jones sophomore Madison Thompson, who identifies as a Buddhist, experiences religion in a way that wouldn't be familiar to those who practice more traditionally by going to a church, temple or mosque.

"Most days, I seek time to meditate, but that is more for my own state of mind rather than my religion, I guess," Thompson said. "I don't attend church or go to a temple."

Outside the confines of a typical religious service, teens are finding other ways to connect spiritually. The synagogue Temple Sholom offers many active teen programs, including the Orr Shalom youth group, which allows teens to get involved in social justice issues in their community. Nondenominational Christian organization Park Community Church also gets teen members involved in service projects, which Pastor Mike Rolfes said can be a valuable religious experience.

"It makes their faith seem more real and alive (when) they can see an outward expression of it," Rolfes said. "They like things that make what they hear on Sunday more practical."

Park Community Church has locations throughout Chicago, and Rolfes said it is a modern religious experience in itself. He believes that this might play a role in attracting high school students to their services.

"It's a very modern church," he explained. "If you go into the main campus, you don't see a lot of crosses or stained-glass windows. We try to make them as inviting as possible for people who aren't accustomed to going to church."

This departure from the traditional environment of organ music and pews might make teens feel more comfortable with religion, as if it's not so separate from their everyday lives. Even those who are devout in their religions, such as Islamic Foundation School junior Haroon Ghiasudden, are able to merge their faith with today's modern culture.

"I am more traditional in my approach (to religion), but I find that it can still fit a contemporary lifestyle (or) setting," Ghiasudden said.

Agnosticism, the belief that the existence of a god cannot be proven, and atheism, the disbelief in god or gods, are other religious perspectives that some teens seem to find compelling. Though in 2014 only seven percent of Americans identified as agnostic or atheist, that number had grown three percent since 2007.

Both Walter Payton sophomore Ella Altamirano and New Trier sophomore Nicole Daniels identify as agnostic atheists, meaning that they do not believe in a god or gods, and believe that there is no way to prove it.

"As time progresses, I seem to find more and more solace in the absence of a god," Daniels said.

Altamirano said that while she doesn't consider her beliefs on religion an important part of her life now, her decision to identify as an atheist involved discussion and consideration. When she was younger, she spent time researching the theory behind atheism and found it relevant to her life and her beliefs.

"I ended up talking and thinking a lot about atheism during middle school due to my friends and classmates; the majority of my middle school (peers), including a few of my friends, were religious," she said. "However, my two closest friends at school were both strong atheists, so this contrast came up a lot, and we often discussed our views and others' views on religion."

Of course, many teens stick with the religious ideals of their parents and grandparents. Jones sophomore Pedro Lagunas considers himself a dedicated Catholic, but that didn't come naturally at first.

"I grew up practicing this religion because I was forced to," Lagunas said. "However, as I grew older, I became very interested in my religion and practice it a lot more often."

Parents also can play a role in influencing teens' religious lives. For some teens, parents serve as a spiritual support system.

"Whenever my parents see that I miss Mass or see that I'm acting different, they would usually talk to me and have me talk to God," Lagunas said. "It is very important to my parents that I'm religious because they see that whenever I get closer to God, I get happier."

Ghiasudden's parents have played a role in his religious life as well.

"My parent are pretty devout Muslims and have enrolled me in private Islamic schools that allowed me to get a religious and secular education," he said. "Of course it's important to them that I'm religious, but it's as important to me."

Others, though, find that their parents' opinions don't influence how they choose to practice.

"My mother has always been passive about my beliefs," Thompson said. "My father, however, still urges me to attend church sometimes, as he actually almost became a minister at one point in his life. I don't let single-sided views change my practice and participation in religion."

Teri Frankiewicz, a parent of two teens in Arlington Heights, said she doesn't particularly care if her children stick with their Catholic upbringing.

"It is very important to me that my children are spiritual, but not necessarily religious," she said. "It's important for them to understand a relationship with a higher power. It keeps them grounded to something far greater than themselves."

Still figuring it out

Part of being a teen is exploring different aspects of identity for the first time. Religion is one aspect of that, and while it might not be as important to teens now as it was a few decades ago, it definitely still plays a role.

Though teens hold many different beliefs on the subject of religion, many agreed that simply experiencing the world around them and respecting others are the most important values.

"A religious experience for me is the feeling of understanding and joy," Thompson said. "I find it within random moments that I am simply being or experiencing something I find beautiful or comforting."

-- Brianna Powell of Homewood-Flossmoor contributed to this story.