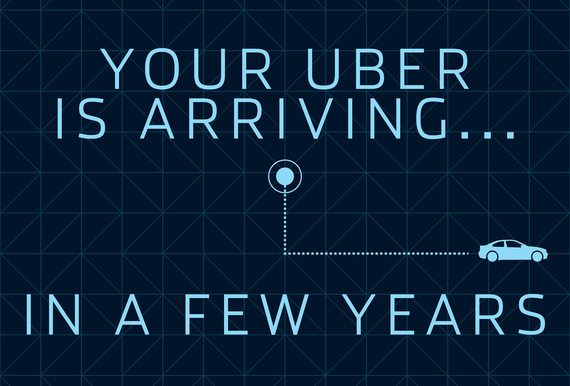 There was a time when moms and dads carted around their children in the good ol' mini-van -- be it to the movies, practice or the mall. When a kid's sweet 16 finally rolled around, newly-licensed teens were more than eager to cruise to their heart's content.

But now, in the new age of "ridesharing," the dynamic of how we get around has changed dramatically.

Within five years of its launch, Uber earned a spot in nearly eight million phones, was used in over 120 cities globally and was valued at around $17 billion, according to 2014 Global Delivery Report data.

So it comes as no shock that as such a fast-growing, youthful company, many teens are drawn to Uber. And why wouldn't they be? At any smartphone user's fingertips, Uber's accessibility has made it huge among a younger crowd.

But here's the catch: Although its tagline states that Uber is "everyone's private driver," the company maintains in their terms and conditions that "you must be at least 18 years of age, or the age of legal majority in your jurisdiction (if different than 18), to obtain an account."

Even with such a rule in place, teens still aren't fazed -- many hardly even know about it. New Trier senior Michaela Shields said she didn't know she wasn't allowed to use Uber if she wasn't 18 or over.

"I'd never even thought to check if there was a minimum age requirement, I just signed up," Shields said. "The sign up was really easy, and I don't even think it asked for my birthday."

Many teens reported having no knowledge of the restriction imposed by Uber. New Trier sophomore Lorenzo Miller said he didn't feel like Uber made users aware of that rule.

"I use Uber all the time and I didn't know that was a rule," Miller said. "I feel like they definitely don't enforce it."

This lack of enforcement is a tricky area to navigate. When setting up an Uber account, a birth date is not required; by simply clicking "agree" to the terms and conditions, someone of any age is essentially promising that they're 18 or over.

Uber spokeswoman Kristin Carvell spoke to the Wall Street Journal about this very topic in December 2014.

"Users agree to our terms and conditions when they download the app," Carvell said. "We expect them to adhere to them. If we were to discover that someone under 18 had set up an Uber account, the account would be deactivated."

But how Uber would find out if a minor was using their services? And if they did find out, would they actually do anything about it?

Harry Campbell -- a Forbes technology contributor and founder of "The Rideshare Guy," a blog and podcast for rideshare drivers -- ventured a guess as to why Uber hasn't cracked down on users under 18.

"They definitely know (minors are using Uber), but I don't think it's an issue for them since they're still making money off every ride," Campbell said. "I suspect they only have this provision to meet legal requirements in certain states."

So, even with the threat of deactivation looming, for the most part, minors disregard Uber's 18 and up rule, continuing to use the app for everything from party hopping to commuting to and from the city.

"I use Uber if I'm somewhere and something goes wrong, like maybe an emergency happens and I need to go home quickly," Shields said. "Using Uber means I can be gone in under 10 minutes usually, and it's really easy to book or cancel rides, depending on what's happening."

Alongside the easy access to a ride, there's another major upside to Uber that draws teens in: The service can act as a replacement for any "designated driver," a chauffeur of sorts for underage drinkers.

Both Shields and Miller admitted they knew of peers and classmates who use Uber to get around after drinking at parties.

"I definitely know certain people who use Uber under the influence, but it's better than driving drunk or anything even remotely like that," Shields said. "If minors having Uber accounts helps reduce the amount of crashes or deaths, then I think it's very important, even if there is a rule against it."

According to a 2015 study Uber did in partnership with MADD, "monthly alcohol-related crashes decreased by 6.5 percent (or 59.21 per month) among drivers under 30" following the launch of uberX in California.

With car crashes leading the way in cause of death for teens -- a quarter of which involve an underage drinking driver, according to MADD -- Uber seems to be an easy solution for many. It makes things easier for parents too, who no longer have to be called at a late hour for a ride home, whether or not the teen is under the influence.

For some parents, this seems like a godsend, but others are suspicious of Uber and question its overall safety and legitimacy compared to that of a taxi service. Shield's father, Kevin Shields, is wary of Uber.

"When I order a cab, the cab calls me when the cab arrives to verify both my and the cab's identities," he said. "I have used Uber once or twice, and there is no such process ... Cabs are marked, licensed and dispatched centrally. It is difficult to 'fake' a cab. It is easy to 'fake' an Uber."

Mother Suzanne Collins has her own doubts about Uber as well, and the rule against minors only serves to fuel those doubts.

"I was not aware of the law because my minors have Ubered," Collins said. "Obviously, it's not enforced."

Collins said she sees Uber's lack of background checks as another pitfall of the service, and so while she wasn't exactly comfortable with the idea of her daughter using Uber, in certain cases, she said it would have to do.

"I guess I would (allow it) as a last resort," Collins said.

Without enforcement, minors are going to keep using Uber regardless of the rule. Uber may very well replace driving oneself around in the future.

"Sixteen-year-olds in the past couldn't wait to get their license," Campbell said. "Now kids are happy to get Uber accounts and have someone drive them around."