Sometimes teen romance can be downright dangerous. Early relationships can be traps for young people, spoiling months or years of their lives and setting the pattern for future coupling.

A crush can turn soul-crushing if it includes sexual assault, domestic violence, or coercive control. Maybe you're not familiar with that last term. Coercive Control describes a strategy of domination through isolation, manipulation, verbal abuse, sexual coercion, and sometimes physical violence. Coercive control exists in some adult as well as some teenage relationships. Most commonly, men control women in this way, but people of all genders and orientations can be victims or victimizers. Here are signs to look for, if you're worried about a teenager's relationship.

1) Isolation: Is the teen spending less time with friends and family? Has the teen dropped out of much-loved activities? A certain degree of wanting to live on cloud nine alone together is to be expected in a new relationship. However, sometimes a controlling teenager deliberately isolates his girlfriend (or a girl he's hooking up with) by monopolizing her time and badmouthing her family and friends. He may insist that she stop hanging out with certain people. He may grow angry if she chooses to see others instead of him, so she cuts off her contacts to keep the peace. Once young people lose close touch with their circle of friends, they become even more dependent on their romantic partners for support and companionship.

2) Cyberstalking and Monitoring: Most teens today use cell phones or computers regularly, providing opportunities for controlling partners to cyberstalk and harass. Some abusive teens will almost constantly text, call, or instant message their partners when they're not together. If the abuser cannot detect a girl's whereabouts through technology, he may track her down in person or by texting her friends. Technology allows an abuser's reach to extend even into his victim's parents' house, where he may insist on speaking with her, texting her, or chatting with her for hours on end. Not infrequently, parents think their adolescent children are asleep while the teens are busy chatting or texting in their rooms. I have known teens whose boyfriends insisted that a webcam be on or a phone connection be open at all times when they are not in the same room. While this is extreme, frequent monitoring through technology is not unusual among teens and young adults. A teen who grabs and looks through another teen's cell phone is showing worrisome signs of control.

3) Threats: Healthy relationships do not include threats or punishment. Because they don't have a lot of relationship experience, it can be difficult for teens to determine when others are being unreasonable. Teen boys often threaten girls overtly or covertly with breaking up, humiliation, or even physical violence. Like adults, when teens punch or kick walls, smash things, drive too fast, threaten suicide, or physically fight with others, they are conveying their capacity for violence.

4) Cyberthreats: Twitter, Snapchat, Instagram, Ask.fm, and similar sites can all be used to threaten, express ownership over, or punish a partner or ex-partner. These communications can be hard to document and extremely frightening, as when a boy sends a picture of a bloody knife over Snapchat to his ex-girlfriend and the image is set to dissolve in seconds. Or when a girl anonymously posts humiliating information about her exboyfriend on Ask.fm. 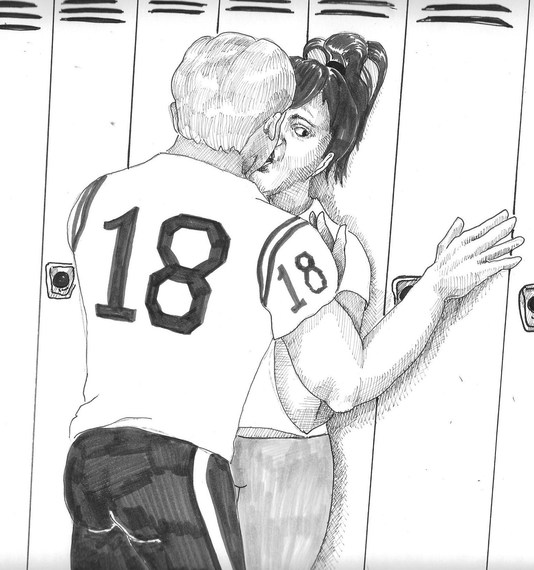 5) Sexual Coercion: Controlling teens use public displays of affection to assert ownership and dominance. Abusive teens often push girls to engage in unwanted sexual activities or to have sex without protection. A controlling teen may encourage a girl to drink or get high so she'll have less of an ability to resist his advances. Of course, I'm not referring to situations where the young woman is happy to participate. I'm referring to situations where she feels that she cannot say "no," or where she has said "no" and he pushes her to go along with it anyway. This is sexual coercion, and--depending on the circumstances--it may be rape or another crime. As we have seen in the Saint Paul's School rape case, sexual coercion can have dire consequences for all involved.

6) Circulating Rumors and Images: Many teens care deeply about their reputations. Teens control their partners through spreading or threatening to spread rumors about them. The information does not have to be true to be damaging.Teen boys often press their girlfriends for naked photos or videos. It is not unusual for boys to circulate these photos among their friends or send them to a wide group as a form of ownership or revenge. Circulating a naked picture of a person under 18 is a serious legal offense.

7) Physical Domination and Abuse: Some adolescents use their size and strength to assert their power. A teenager might tickle a girl or wrestle with her, continuing to roughhouse even when she asks him to stop and is clearly distressed. He might restrain her by holding her down or grabbing her wrists, and then mock her if she becomes upset. A controlling young man might slap a girl, even in public, and then define his actions as "just messing with you." A controlling boy might grab, push, hit, pinch, or even bite a girl as a threat or punishment, or just to show "who's boss." However he defines it, if the person being hurt does not desire the actions or is intimidated by them, then they are abuse. Once the violence has begun, it can become a routine part of the relationship.

Coercive Control is tricky because many of the behaviors can be concealed in a wrapper of "love." For instance, "I want to know what you are doing at all times because I worry about you." Or, "If you really loved me, you'd have sex with me now." Or, "Don't listen to your parents. They don't understand you like I do." A young person may be confused by control that masquerades as love. It feels like control but he says it's love--which is it? The first step in helping people free themselves from a relationship trap is to break their isolation. The second step it to help them identify the problem.