More U.S. teens are using long-term forms of birth control that they don't have to remember every day, but these methods are still relatively uncommon, according to a new report from the Centers for Disease Control and Prevention.

Because these methods, known as long-acting reversible contraception (LARC), are the most effective types of birth control for teens, more efforts are needed to increase access to them, the CDC says.

"Health care professionals have a powerful role to play in reducing teen pregnancy. They can encourage teens not to have sex, and discuss the use of IUDs and implants as contraceptive options available to teens who choose to be sexually active," Ileana Arias, principal deputy director at the CDC, said in a statement. "We need to remove barriers and increase awareness, access and availability" of these methods for teens, Arias said. [Teen Pregnancy Rates By State]

LARC methods are safe for teens, and unlike birth control pills or condoms, they do not require that people remember to do something each day or every time they have sex, the CDC says. Over a year of "real life" use, less than 1 percent of LARC users become pregnant, compared to 9 percent of women who use birth control pills and 18 percent who use condoms. Recently, the American Academy of Pediatrics recommended LARC as the first-choice birth control for teens.

In the new study, researchers analyzed information from more than 7.5 million teens who sought contraception from family planning centers funded by a federal grant program known as Title X.

LARC use was highest in the West, with 9.5 percent of teens in that region using these methods, and lowest in the South, with 5.3 percent of teens using these methods. Besides Colorado, other states with high use of LARC included Alaska (19.6 percent), Iowa (16.6 percent) and Hawaii (14.4 percent), while states with low LARC use included West Virginia (2.0 percent) and Indiana (1.5 percent). 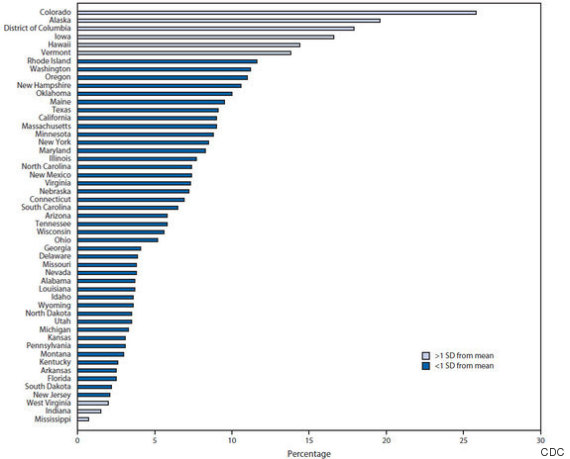 This graph shows the percentage of teens (ages 15 to 19 years old) in each state who used long-acting forms of birth control, among those seeking birth control. Click here to enlarge image.
(Image Credit: CDC)

The report describes some barriers to LARC use for teens, including that many teens know little about these methods. Additionally, providers may have unfounded concerns about the methods' safety for teens or may not be trained in how to insert or remove the devices.

"Removing barriers to LARC by educating providers that LARC is medically safe for teens, training providers on LARC insertion and a client-centered counseling approach that includes discussing the most effective contraceptive methods first, and providing contraception at reduced or no cost to the client, can increase the array of options available to teens and may contribute to the continuing declines in teen pregnancy in the United States," the report says.

The Title X program funds training in IUD and implant insertion and removal, and provides these birth control options at low or no cost, the CDC says.

Because LARC methods do not prevent sexually transmitted diseases, it's recommends that they be used with condoms.