Tough sanctions and a struggling economy have caused a severe medicine shortage in Iran, but the country is also facing a dire health crisis of another kind: air pollution.

Hassan Aqajani, an adviser to Iran's health minister announced Sunday that 4,460 people have died from air pollution in Tehran in a one-year period since March 2011, AFP reports. The announcement came just as a five-day closure of government offices, schools, and banks because of air pollution came to an end -- the second such shutdown in a month.

Though the city has reopened its public buildings, officials are still urging residents to remain indoors, likening going outside in current conditions to "suicide," the New York Times notes.

The cloud of yellow smog enveloping Tehran has become an annual event in recent years, as sanctions on imports of refined gasoline have forced the country to turn to low-quality alternatives, exacerbating Iran's already tenuous environmental state. "It feels as if even God has turned against us," a local artist told The New York Times as the city's skyline remained obscured with smog.

Aqajani said that the number of patients who have visited the city's hospitals with heart problems has increased by 30 percent in recent days.

According to the Tehran Times, Yousef Rashidi, director of Tehran's air quality monitoring services, recently told a local newspaper that cars account for 70 to 80 percent of the city's air pollution. However, he denied the claim that low-quality gasoline is causing the problem, placing the blame instead on the vehicles' combustion system.

A World Health Organization report from 2011 listed four Iranian towns among the top-ten air-polluted cities in the world. The New York Times notes that the report also placed Tehran's pollution at four times that of Los Angeles, while stating that the city is even more polluted than others known for their poor air quality, such as Mexico City, Shanghai, and Bangkok. 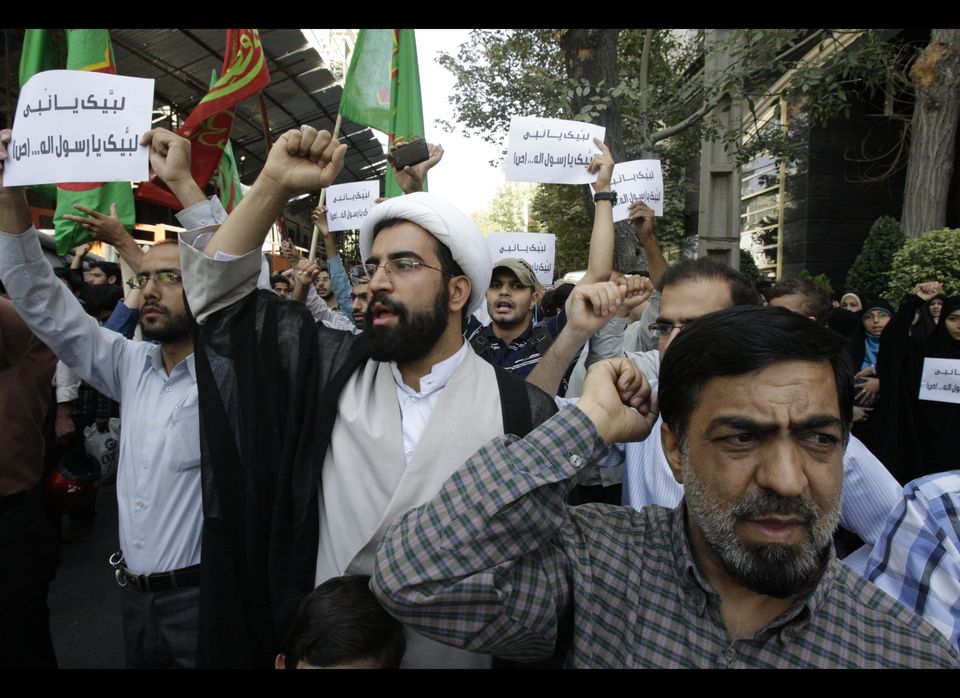 1 / 6
Iranian protestors chant slogans during a demonstration against a film ridiculing Islam's Prophet Muhammad, in front of the Swiss Embassy in Tehran, which represents US interests in Iran, Thursday, Sept. 13, 2012. (AP Photo/Vahid Salemi)
AP