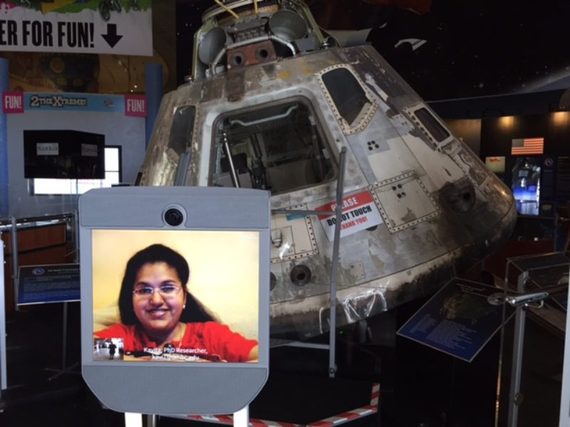 Ron Carrico began Kavita Krishnaswamy's private tour of the San Diego Air & Space Museum near a replica of Charles Lindbergh's Spirit of St. Louis, describing the torturous 33-hour flight across the Atlantic in such a way that isn't printed in history books. As the two made their way through the facility, Krishnaswamy, a doctoral candidate in computer science, waved hello to fellow patrons and paused to see the planes hanging from the ceiling. The only thing atypical about her visit was that she wasn't technically at the museum, which is located in Balboa Park, Calif. Extraordinarily, she was more than 2,600 miles away sitting in front of a computer in Baltimore County, Md, controlling a five-foot-tall, roving BeamPro robot equipped with a wide-angle camera and a 20-inch screen that projected her face at eye level.

Originally built to automate industry, to ease business interactions for remote employees or to simply entertain, robotic technologies are taking on a significantly nobler purpose: assisting those with disabilities in their day-to-day lives. Text-to-speech capabilities on iPhones allow the blind to read anything online. Doctors and therapists use robots to make virtual rounds to patients who cannot physically leave their homes. And at the San Diego Air & Space Museum, which received a $25,000 grant from the NBCUniversal Foundation, people with severe disabilities can use innovative "telepresence" BeamPro devices to partake in a historical and cultural adventure they'd never be able to experience otherwise.

The museum keeps two robots charged at all times, ready to give BEAM tours to those who can't make it to Southern California. Katrina Pescador, the museum's archival director, saw the robotic technology's potential after the manufacturer held a conference nearby, quickly signing up to offer virtual museum tours to people who are hospitalized or mobility challenged. "I want people to have the freedom to experience the world and not be locked up some place," says Pescador, whose daughter has a disability. "But it's also important that people in the world see other people with disabilities. All of us need to be interacting together."

The device provides those with physical disabilities a unique opportunity to explore the world in a way that clicking through images on Google never can. The BeamPro allowed Krishnaswamy, who has spinal muscular atrophy, to enjoy a rare experience of free movement. "It gave me an immersive experience like I was physically there," she recalls. "I could move around. I had the ability to turn. I could see people and interact with people," she adds. "Just moving around on my own without any limitation and seeing somebody eye-to-eye: that's really a new experience."

Pushing application of the technology even further, Carrico's colleague Ross Davis is attempting to use the BeamPro for virtual school field trips. Davis, the museum's education resources coordinator, believes it's the ideal way for budget-conscious schools to engage students. Educators can log on and within seconds, get kids excited about the physics involved in getting 1,500-pound object soaring through the air. "We want to make it easy. We like easy," Davis, a blunt former Navy pilot, says. (Offering top students a chance to command a robot is a sure-fire way to motivate a group of kids, he adds.) Even better is a virtual field trip's ability to host low-income children. "We want to bring in the [kids] who wouldn't get to visit, whose parents are too busy and don't have time or money to buy tickets," Davis says.

The school tours are still a project in process. Davis has tried at least three times to connect with one classroom, but the San Diego public school system has a firewall he hasn't yet been able to circumvent. Once that basic connectivity issue is fixed, Davis has big plans: He envisions integrating 3-D diagrams, YouTube clips and sound bites into his guided tour to bring some of the aircraft hanging in the museum roaring into motion. From there, he'll offer telepresence tours to anyone in the nation -- enabling those with limited financial resources to have the same learning opportunities as their wealthier counterparts.

If the school visits work as well as Krishnaswamy's tour, the program will be a success. Months later, she still raves that, "It was one of the best experiences I've ever had." A graduate student at the University of Maryland, Baltimore County, Krishnaswamy studies how technology can assist others with disabilities like herself. The BeamPro is a prime example of what she wants to develop: a device that let her experience life in a different way.

As Krishnaswamy viewed the exhibits with Carrico, she thought about how quickly technology advances. In 1903, the Wright Brothers could barely keep a plane off the ground for more than a few seconds. Fast forward to 1969 when men rocketed into space and landed on the Moon. In a way, it's fitting that Krishnaswamy is using a robot to experience the history of progress on display. In comparison to how fast she can jet into the museum from across the country, a trans-Atlantic flight feels like no big deal. If Lindbergh could see the BeamPro today, surely he would feel a twinge of jealousy.

The San Diego Air & Space Museum is a recipient of last year's 21st Century Solutions grant powered by the NBCUniversal Foundation, in partnership with the NBCUniversal Owned Television Stations. The grant celebrates nonprofits that are embracing innovative solutions to advance community-based programs in the areas of civic engagement, education, environment, jobs and economic empowerment, media, and technology for good. Apply here for a chance to be one of the 2016 winners!