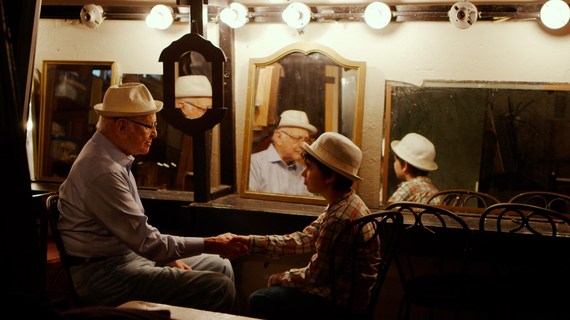 Norman Lear knows how to keep people glued to their televisions, and now he's poised to do it again, but with a little twist. The legendary writer and producer behind iconic sitcoms like All in the Family, Maude, Good Times, The Jeffersons, and Mary Hartman, Mary Hartman goes in front of the camera for a change for the new insightful documentary American Masters-- Norman Lear: Just Another Version of You airing October 25th at 9 pm on PBS (check local listings).

At 94, Norman Lear's got a lot of television history, success stories, challenges, and personal insight to share. And lucky for us, he chose to connect with award-winning documentary filmmakers Rachel Grady and Heidi Ewing to highlight his fascinating journey. I caught up with the iconic producer for my podcast Whine At 9 to discuss the new documentary and his remarkable entertainment legacy.

If you're ever in Hollywood and caught behind Norman Lear's car at a red light, you'll see the bumper sticker that drives him. 'Just another version of you'-- the phrase that summarizes his philosophy, inspired the title of the Lear documentary. Explains the groundbreaking writer, "That's the core of my belief. You know, we are versions of one another. Despite the different skin colors, and ethnicities, and so forth-- all the things that separate us, we are basically, at our core, versions of one another."

Acknowledging deep-seated similarities might have been the secret to Lear's ability to push the envelope and break barriers. Sometimes it takes a little shock to push you toward reflection, or make you see what's been in front of you all along.

While Lear has always been game to tell other people's stories, it was only recently that he gave the nod to tell his own. "When Rachel Grady and Heidi Ewing, the two women who made this documentary came along, I had already seen several things they had done...And it was just the right timing for me, and they were certainly right. And they made it...I had nothing to do with it. They made the show as they saw it. And I thought they did a glorious job."

American Masters-- Norman Lear: Just Another Version of You captures the essence of Lear and his celebrated work. Says Grady, "Just the shear amount of material that exists that has something to do with Norman Lear, is kind of mind-boggling." Lear spearheaded over 700 hours of prime time television which can give any documentarian moment to pause. But while Grady calls their need to boil down 90-plus years of information to 90 minutes "a daunting task", she's quick to acknowledge that she and Ewing encountered "an embarrassment of riches" as they reviewed Lear's impressive archives and legacy. Somehow, they've distilled it down and created a beautiful and comprehensive tribute to a man whose resume defies brevity.

Get the inside scoop on Mary Hartman Mary Hartman! Watch this exclusive clip below from American Masters- Norman Lear: Just Another Version of You.

Most of us will never have the opportunity to sit down and watch our life story being told. When all is said and done, does sharing your story and seeing it via a documentary give you a different perspective? Lear believes there's some clarity to be gleaned from the process. "It helped me understand what I had been reaping through the years," says the producer who now realizes that the small pieces of the puzzle matter as much as the entire project. Small things can touch lives and make a difference. Several years ago, during an evening with hip hop legends addressing the impact of his shows, this fact was hammered home for Lear.

"When [entrepreneur and hip hop force] Russell Simmons said he saw George Jefferson (lead character in the ground-breaking 1975 show The Jeffersons) write a check--and he [Simmons], at nine years of age at that time, that was the first time he knew-- he just learned that a black man could write a check. He never knew a black man could write a check. And at nine years of age, that was a major piece of information for him. And that's when I began to realize, it's the little things that we help-- all of us help one another with-- that matter as much as the huge things."

American Masters-- Norman Lear: Just Another Version of You is also available on DVD and Blu-ray.