Chicago comedian, writer and actor released his debut album this year called Tell Me You're Proud of Me. His album was recorded at Wild Goose Creative in Columbus, Ohio at the Columbus Unscripted Improv Festival. He has been doing stand up since 2008. Campbell was kind enough to give me an interview. 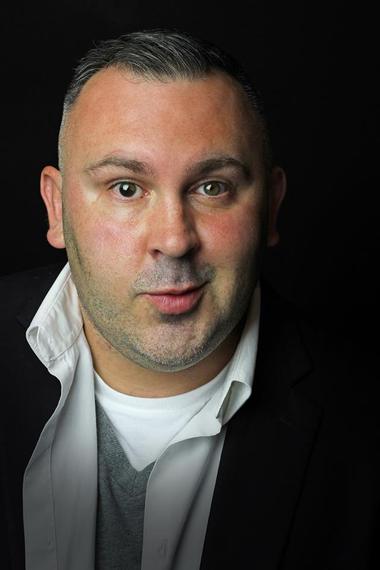 How would you describe the Chicago comedy scene?

The Chicago comedy scene is amazing. People move to this city just to do comedy. Not to get famous -- to do comedy. People rarely get famous while they're based out of Chicago. Don't get me wrong -- a TON of famous people who started in Chicago have gotten famous, but that's mostly happened after they moved away. There's something special about a scene where you can take risks. The chances of a scout for a network showing up to your show are slim, and because you don't have to worry about blowing a chance for success, it's okay to make a bold move that might have you fall on your face. Risk are what makes you better, and this scene thrives on that.

Do you have any advice for young comedians just starting out?

Realize that it's a process. A lot of young comics want someone to critique them. They say "I can take it. Just honestly tell me what I'm doing wrong and how to improve." What they're really saying is "fix me." Nobody can fix you, because you're not broken. What you are is someone who is evolving. Most of your favorite comedians took years to get to the point where they were doing the work that you love. They did a lot of terrible work on the path to getting where they're at. You're probably not going to be the exception to the rule. Take your time. Learn from each set. But most of all -- enjoy the journey. You'll be glad that you did.

What comedians inspire you?

I'm constantly inspired by comedy. I perform almost every night, so when I have free time, I often don't choose to watch comedy. Because of that, most of my favorite stand-ups are those who are crushing it here in Chicago. The comics who inspire me are those who aren't scared to be vulnerable, like Sean White and Kristen Toomey, or those who are unapologetic in their humor, like Junior Stopka and Mike Lebovitz.

No one makes me wish I was a better writer than Adam Burke. On the national scene, the comic who resonates the most with me is Stewart Huff. Stewart will bring an audience to ta peak of laughter, then say something so poignant that they're on the verge of tears, and then say something hilarious that has them rolling again. He's the kind of guy who you can watch and afterwards want to throw out half of your material because it seems meaningless.

Are there any young up-and-coming stand ups you really like?

Once again, I'm going to go to the Chicago talent pool for this question. Rachel McCartney has seemed to come out of nowhere as a boldly hilarious comedian who I always look forward to hearing from. Martin Morrow and Reena Calm are turning into local powerhouses who I would place a bet will become household names while I'm still trying to figure out how to pay my utility bill. Cody Melcher and Dave Losso are bold and vulnerable in a way that I envy, especially considering how young they are.

What goals do you have for yourself in stand up?

I just want to work. I want to get better and be as honest onstage as possible. One thing that I'm doing on my tour is putting a bucket onstage before the audience comes in and asking them to write down a topic on a sheet of paper. Later in my set, I'll see what topics were tossed into that bucket and riff on them. I would like to eventually be able to do an entire hour on whatever is tossed into the bucket. One thing that I'm working on is letting go of control. I'll have a gameplan of the material I'll want to cover during the show, but my focus is being ready to let go of that material and talk about whatever the room seems interested in, even if that means my set evolves into mostly crowd-work. I'm doing a lot of that now, and it's been going well. I'm excited to see where it goes.

How has your background of overcoming emotional adversity informed your comedic voice?

I had a rough childhood, but that's not a rare trait for a comedian. When I first started to do comedy, I was uncomfortable talking about myself. My act was mostly wordplay and pop culture references. What changed things for me was a room called Depression Hour. This was a short-lived open mic. It was run by Junior Stopka and Tia Ayers. The only rule at the open mic was that you didn't do jokes. Instead, you had to tell sad, true, personal stories. Comics would show up and be pissed because they couldn't just be funny. If you launched into material, they'd give you the light right away and get you offstage.

What it turned into was a therapy open mic. Most performers weren't even stand-ups. They were just people with rough incidents in their past that they hadn't told anyone about. I remember one performer who talked about having a friend with cancer. His friend wanted him to come and see him in the hospital. He promised to come and see him, but couldn't bring himself to go. Eventually, his friend died and he never went to visit him. This thing had been eating at him for years, and he told it to a room that didn't judge him.

Humanity was on display, and it was special. Another performer told a story of being sexually assaulted by her boyfriend. She didn't know how to handle it, so she stayed in that relationship and endured it again and again. It was heartbreaking. It was also honest, and something she was dealing with. She wasn't broken. She was coming to terms with her past. Everyone was. And each performer would walk offstage as if a giant weight had been removed from their shoulders.

That was my experience. I started talking about being abused as a child. Watching my mother be abused. My own regrettable actions. Since I am a comedian, things naturally would get laughs, even though they were dark. I learned that you could make these things funny without compromising their brutal truths, and something changed in what I wanted to do as a comic. I became more of a storyteller. I still do a lot of silly bits. I can't get away from that. I'm a giant child. But, most of that ends up being pallet-cleansers between stories.

As you progress more do you think you'll be writing more about your troubled past? (If so why if not why not?)

Absolutely. That's what I think is coming up next. When I was 12 years old, I was in the middle of a custody battle between my mother, who was on welfare and my wealthier father, who abused her during their short-lived marriage. My mother was also in an abusive relationship with her common-law husband and decided her best-bet to keep her children safe was to go into hiding. She technically kidnapped me, and we went to New Mexico where we lived under an assumed name.

Eventually, a private investigator found my mother who had failed to show up to her custody hearing and I walked out of the bathroom to see my mother in handcuffs. I was taken to an airplane where I lived with my father and stepmother, and had extremely limited contact with my mom until I was 18. That's not a normal thing for a kid to go through.

One thing I've enjoyed about discussing dark things is that people who are going through, or have gone through, similar fucked up situations will identify with it. There's something special about finding out you're not alone in those parts of your life. The next thing I am working on is doing a longer set based on those moments. If nothing else, it will help me deal with the unresolved issues and maybe connect with someone else so I don't feel like such a weirdo for having gone through what I did.

Do you think your improv experience has aided your stand up?

Absolutely. I think that improv has helped me to make my stand-up a conversation with an audience rather than a monologue that I'm rehearsing.

You have kinda a road comic vibe, do you change your act when you perform in different rooms?

I definitely change my act, depending on the room. I've gotten better with that over the years. I don't always plan to change my act when I'm going somewhere, but I take the time to research the city I'm going to. I might not always work it in, but knowing the information allows it to be in the back of my mind if the opportunity strikes. I recently did a touring gig in Dowagiac, Michigan. It's a small town of about 6,000 residents that is most-famous for being the place where fishing lures were invented. I never got to talk about it, but if the moment arose, I would've had it in the back of my mind. For me, it's not about planning jokes based on the location, but rather about knowing who your audience is.

What is the hardest/ worst thing about stand up right now?

For me -- just being broke sucks. I can't complain though. I chose to quit my job two years ago, at a time where paying my bills as a comedian was probably not feasible. My theory was that I would have to work harder without the safety net of a regular paycheck. I don't regret it, but I definitely miss having less-stress about little bills. My phone is only on for three weeks out of every month, because I can't pay it on time.

Also, being a guy who doesn't have management or an agency, booking a national tour has been difficult. I'm hoping that this album release and tour will get me to the point that I can get an agent and manager. I don't like dealing with the details that don't have anything to do with me performing. I just want to do comedy without having to worry about also being an administrator, manager, agent, and everything else.

What do you think is the best thing about stand up right now?

The best thing about stand up, in my opinion, is how undefined it is as an artform. You can do just about anything, and you can do it just about anywhere. My favorite show in Chicago is at a venue called The Shithole. It's run by a couple of guys who produce their shows out of an attic and a stand-alone garage. They don't advertise the locations -- you have to email them for details.

It's very underground, and the audiences are better than you'll get at any big-name club or hot bar showcase. I think that part of the reason for this is that you have to go through a little more effort to get to the show. You have to know someone who's doing the show or go through the process to email them for the location. You have a vested interest in seeing the show. When you are there, you feel like you're part of something special that not everyone gets to experience. It's the best place to perform in Chicago -- hands-down.