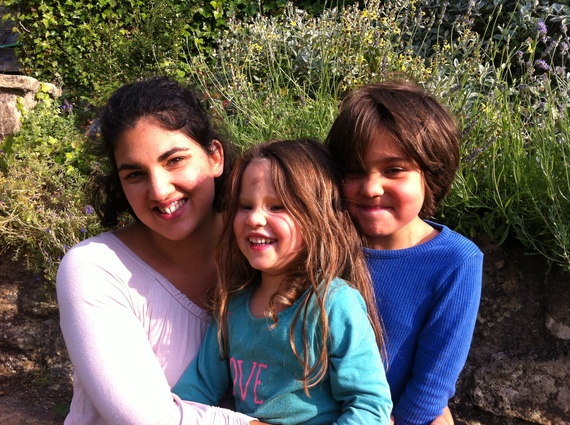 How do I go about telling my kids that everything has changed, that I'm not in love with their dad anymore, that our family unit is no longer? This is most vexing of all the torments whirring in my head such as 'how am I going to manage two rents?' and 'will anyone ever love me again?' Breaking it to them that life wasn't going to be as planned felt like a really pivotal moment. Potentially Earth-shattering. Something they might remember for the rest of their lives. I really wanted to make sure we said the right things and that their limbic brains (scanning for the non-verbal message behind anything we might say) would pick up a deep sense of 'we got this kiddos.'

So the first task before going anywhere near Woody, 7 and Alice, 4 was to work on my feelings, using the tool we folks at Hand in Hand Parenting call Listening Partnerships. This is where two parents exchange specifically structured time listening to each other with the intention of offloading emotion. In these calls I could tremble with fear at the thought of all the steps I was taking and rage about how my own parents handled their divorce. And I did an awful lot of crying. I cried at the thought of hurting my sweet children, hurting the dear man I was leaving, about being overwhelmed with new responsibilities. I sobbed out all the hurt and isolation I felt as a child. I practised what I would and wouldn't say to the kids and cried about how that felt. To my relief, after all this I found that I had released some of the emotional charge.

I got some wonderful advice from the extraordinarily wise Patty Wipfler, founder of Hand in Hand. She said

You need to talk to both your children directly about what is happening. They need to know that you are separating, but none of the nitty gritty about why. It will be easier on them to face the real situation, and shed their feelings about it, than it will be to have it kept hush-hush, as though it were too damaging to talk about. I would suggest breaking the news to them together, if you can. You'll want to frame it as a change in how you live, not as a change in how you love them. Don't answer questions that aren't asked. Let them know they can ask you anything they need to know, anytime.

On the day we decided to break the news, I wanted our kids to feel connected, so I did some Special Time with my son. He requested to go to the park. Amazingly, he was set on playing hide and seek, a game I know to be effective when playing out issues around separation. Children seem to have an intuition about what games they need to play. I would count to 100, soaking in the delicious, balmy sunlight and then be absolutely stumped when I couldn't find him anywhere. He exulted in being the amazingly sneaky, adept climber, hiding high up a tree and I would marvel "Whoa, how did you get up there? You're like a lemur!" When it was my turn to hide I found myself resting against an oak tree for support, writing half this blog in my head and realising how wobbly I was feeling, I hauled my attention back to the present. When we arrived home, Alice also instinctively engineered her own emotional release by throwing a wild tantrum and refusing to get out of the car.

Their dad was in a good space, having done some listening time in preparation. I hadn't been able to get hold of any of my listening partners so he offered to listen to me while the kids were playing outside. I felt agitated and snapped at him to put down his coffee and just listen to me then! I pushed against him and sobbed hard that I was frightened I'd fuck it up.

We all sat in the garden together.

"Kids, we have something we need to tell you." he began

"Mummy and Daddy are changing the way we relate so that instead of loving each other as a husband and wife, we will love each other as friends. We'll always love you and be a family, nothing will ever change that."

At this our 7 year old shook his finger in exasperation and said, "But you ARE married!"

I felt a tightness in my chest. This was it.

"Not anymore Sweetheart, our family is changing. You might have some feelings about that and that's OK, we are here to listen." He seemed to accept that as easily as if we were changing plans for dinner, but I knew it would just take time to process.

"We feel like we'll be much better parents for you as friends."

Their dad went on to explain that we'd continue the schedule we had already adopted and that on the days we were working, each one of us would stay away from home those nights too.

"You can ask us anything about this any time. Do you have any questions now?" I asked.

"Ok Dad can we go in the woods now?" pressed our youngest.

And that was it for now.

We expected that Alice and Woody would process any feelings of loss in their own time, which might show up as upsets over little things. As the week unfolded, our kids tried to kick the shit out of each other and us. The small one did a good lot of crying. We listened. Woody mostly got verbally and physically abusive towards his sister. "Oops can't let you do/say that" we'd stop him and he'd release in little cries. A few weeks later they are still winding each other up constantly and Woody is very reactive and aggressive. I see this as a cry for help during a time of stress; both of them sensing both parents' minds are partially elsewhere and needing to revert to extreme tactics to keep our attention.

What I am learning is that although this is a hard time with lots of change, because the kids stay in the family home and we come and go when it's our turn (known as bird-nesting), the biggest feelings around all this actually belonged to us. Not much was changing in real terms for them. Their dad and I however, having lived through traumatic family break ups, were deeply triggered by this situation. The most important difference is that we are hoping to remain friends, so our kids won't be burdened by our feelings of animosity towards each other. Patty says

Do what you can to openly commit, and have your husband openly commit, to never, ever denigrating the other person in the presence of the children. No eye-rolling, no saying, 'Oh, that's just like your dad!' in any kind of disapproving tone, no nothing. This is the thing that really hurts children.

I'd love to hear how it was for you when you told your kids you were parting, or when your parents told you. What did you wish you knew then? Tell us in the comments.