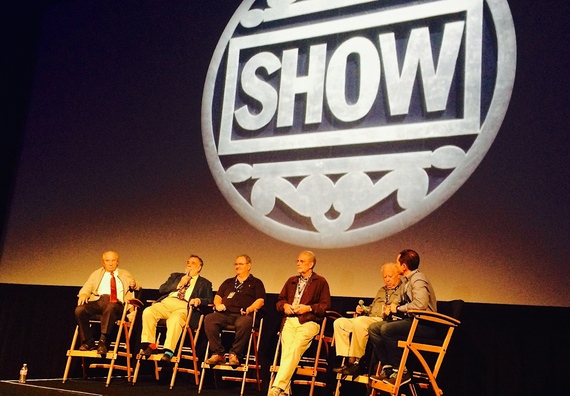 The Telluride Film Festival offers a great span of cinema, from premiering Oscar contenders to silent-era black-and-white gems to small budget independents that will never play widely but may earn an enduring cult audience. With 10 theaters screening films simultaneously, it's impossible to see them all. But I can offer a cross section of this year's selections, described below with all due brevity and bias. And while you're reading, here's a bit of cinema esoteria from one of the awesome post-film discussions (Hint: This nugget gleaned from the discussion of The Imitation Game.)

Question: why does the logo of Apple Computer have a bite out of the apple? (Answer at end of article.)

A Tribute to Apocalypse Now opened the festival on Friday night, setting the bar high. Director Francis Ford Coppola's gutsy, larger-than-life movie of the Vietnam War is as forceful and relevant a movie now as it was when released in 1979. Watching the film at the Werner Herzog theatre with its huge screen and explosive Meyer sound system brought Coppola's claim to life: "Apocalypse Now is not about Vietnam, it is Vietnam." Listening to the production crew share war stories afterwards about producing the film made clear that the team was a magical combination. The fusion of their addressing difficulties, harnessing happenstance, and collaborating creatively made for a true masterpiece of American cinema. The now more restrained Coppola, revising his earlier statement, offered, "The movie is not about war, it's about civilization." Ah yes, the horror, the horror...

99 Homes is a narrative film about the 2008 mortgage crisis. Writer/director Ramin Bahrani does an outstanding job of fictionalizing the foreclosure of houses across Florida and the desperate circumstances of people evicted from their homes. In a terrific performance, Michael Shannon plays a wonderfully predatory Rick Carver, an unethical real estate developer who hovers over foreclosed houses like a vulture, ready to strike and profit. He evicts Dennis (Andrew Garfield perfectly evokes this heart-wrenching role), a single dad who supports his son and mother, whose desperation leads him into a Faustian bargain with Carver. The emotional drama is raw and thoroughly credible as people are faced with armed police knocking on their doors and giving them two minutes to get out. "You don't own this house anymore -- the bank does." Bahrani's ability to fashion dramatic fiction out of this very real catastrophe makes him a filmmaker to watch. His slice of social realism is invaluable -- this is the kind of filmmaking that can help cure cultural cancers.

The Price of Fame tells the ill-fated exploits of a pair of petty criminals who decide they can improve their lot in life by digging up the coffin of the recently deceased Charlie Chaplain and blackmailing the family for ransom. An absurdist French farce from Xavier Beauvois that Chaplain would have appreciated if he had the patience to survive the film's glacial pace, the sluggishness is relieved by the charm of the daughter, the matrimonial jousting of her parents, the foolishness of the clown, and the dignified butler whose proper façade masks a strong-arming minion.

Merchants of Doubt documents the propaganda methods of corporate interests to counteract any information that might threaten their profiteering. The film opens with a magician, a self-described "honest liar" who reveals the tools of his confidence game, how distracting people allows the slight of hand to go unnoticed. The film reviews the pro-cigarette operations of the decades following the 1950s discovery linking smoking with cancer, as well as the insidious, profitable and injurious campaign to require flame-retardants in fabrics. And finally, the film covers the resistance to recognizing climate change, how oil and gas interests control opinion and legislation through effective propaganda. Faux environmental groups, such as Citizens for the Environment, ostensibly appear genuine but are actually undercover checks against action, funded by fossil fuel corporations. The seriousness of the charges is tempered by humor -- Twilight Zone episodes depict parallel universes, underscoring the conflicting claims of opposing interests. This revealing exposée shows how genial propaganda campaigns can cast enough doubt to squelch reform in the face of scientific fact.

Socialism offers a montage of film clips from the last century that celebrates the promise of socialism. Edited by Peter von Bagh, once a TFF guest director, the footage includes promotional documentaries and news reports of socialist efforts. Often the optimistic announcement of coming change is followed by reports of repression: for example, one bit records the gunning down of several protestors during a 1930s union strike in Pennsylvania. The collective impression is sobering; all over the world, movements rallying for some form of socialism have been systematically squashed.

The 50 Year Argument is a nostalgic memoir about The New York Review of Books, founded when a strike at The New York Times kept The Book Review from the presses and there was nowhere to review new releases. The documentary includes some great vintage footage of intellectuals and writers from the second half of the 20th century, including Susan Sontag, Norman Mailer, Gore Vidal and Joan Didion, to name a few. They comprised a remarkable compendium of thinkers in Manhattan, whose counterparts these days may be living in Brooklyn.

Keep On Keepin' On is a breath of optimism, an overly-long but sweet documentary that chronicles the career of Clark Terry, one of the foremost trumpet players of the jazz age. Vintage clips of Miles Davis and Duke Ellington depict the music of his mentors. Terry's generosity is moving as he encourages his protégées Quincy Jones and the young, blind piano player, Justin Kauflin. And this being the Telluride Film Festival where anything can happen, Kauflin and Jones showed up to play together on stage. Despite seemingly insurmountable obstacles, these musicians keep on keepin' on to success.

Answer: Rumor has it (Apple staff's lips are sealed) that the bite out of the Apple apple is a reference to Alan Turning, the English mathematician who built the first mechanical computer. During WWII, Turing's machine broke the code of Nazi Germany's encrypted messages. But Turing's brilliance was accompanied by much suffering, and in midlife he committed suicide by biting into an apple that he laced with cyanide. To this day he remains a revered figure in the computer world. His remarkable story is told in Morten Tyldum's polished The Imitation Game, sure to be on Oscar watch. And whether or not the rumor is true, the film alludes to it in scenes that portray Turing's love of apples and his messing about with cyanide. 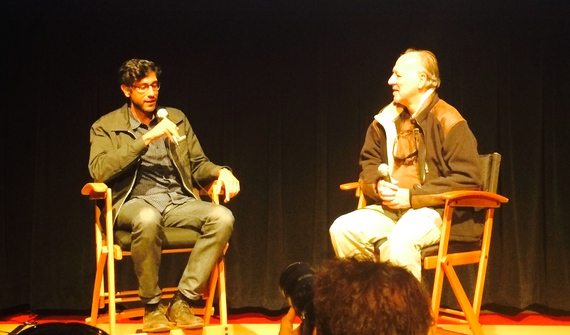