Rosen: Hello, Mike! Just last Friday, you and I were standing in the office and wondering where this year's awards contenders were hiding. (After all, by that Friday last year, "Argo" had already debuted.) Then "12 Years A Slave" premiered at the Telluride Film Festival that night, and we received our answer.

Steve McQueen's film was pegged as an early Oscar favorite after its trailer debuted in July, and the first wave of reviews from Colorado did nothing to disabuse that notion. Even Hollywood Elsewhere editor Jeff Wells, who was preemptively underwhelmed by "12 Years A Slave" during a HuffPost Live chat with Ricky Camilleri and I in August ("What is it that's exciting about this film?"), was bowled over:

All of which makes "12 Years A Slave" a front-runner here on Labor Day: THR awards expert Scott Feinberg already has the film grabbing nominations for Best Picture, Best Director, Best Actor for Chiwetel Ejiofor, Best Supporting Actor for Michael Fassbender and Best Supporting Actress for Lupita Nyong'o. To put that in perspective, the only films last year to have that many nominations in the major categories were "Lincoln" and "Silver Linings Playbook." None of this, however, is too surprising -- "12 Years A Slave" was the top choice among the Gurus O' Gold at Movie City News -- but McQueen's film is set as one of the ones to beat this year, and it hasn't even hit Toronto or New York yet.

Also earning rave reviews at Telluride was Alfonso Cuaron's "Gravity" -- but despite the critical outpouring, it still reminds me of last year's "The Master" from an awards standpoint. "Gravity" looks like an acclaimed masterpiece from one of the world's best directors that could wind up with some below-the-line nods and at least one major acting nomination. (Sandra Bullock is the obvious choice there, though the idea that George Clooney could sneak in the supporting actor category is growing.) Make no mistake, "Gravity" is a movie that I've waited four years to see; if it isn't the greatest movie EVER, I'll be shocked. It's just that when was the last time the greatest movie EVER earned double-digit Oscar nominations, including Best Picture? Besides, if you believe the early Telluride buzz, "Gravity" studio Warner Bros. might have its awards campaign hands full with "Prisoners" ...

Hogan: Hey Chris, it was just this past Friday that I was sucking down beers and asking you to explain what could have possessed Warner Bros. to spend $40 million on "Prisoners," a film that, judging from the trailer, looked about as enjoyable as being kidnapped and chained to a radiator for two hours. But the reviews shut me up faster than Hugh Jackman's angry-daddy face. Variety came right out and called it a "grand-slam," citing its "career-best performances from Hugh Jackman and Jake Gyllenhaal," so go ahead and mark those two on your Oscar ballot. (Just kidding, it would be absurd to start filling out an Oscar ballot this early. Wouldn't it?!!)

Whether "Prisoners" makes "Seven" money ($100 million) or "In the Bedroom" money ($36 million) remains to be seen, but clearly we have a genuine awards contender here, especially given the depth of the cast. Viola Davis, Terence Howard, Melissa Leo -- is there anybody in this thing who hasn't been nominated for an Oscar?

As for "Gravity," which I am very excited to see at the Toronto International Film Festival later this week, I think it's looking more than solid for Best Picture and Best Actress nominations, not to mention those below-the-line nods. But I think you're right to call it a long shot to dominate Oscar night. At some level, we're talking about a popularity contest that tends to reward the movies with the biggest and most popular teams. You can't get more popular than Sandra Bullock and George Clooney, but George isn't even planning to do any glad-handing on behalf of "The Monuments Men," which he directed. With Marty and Leo to the left of them and Bradley and J-Law on the right, Team Gravity could find itself stuck in the middle with "Lee Daniels' The Butler."

Actually, that's one reason I think this "12 Years a Slave" Oscar bubble could eventually pop. I'm excited to see the film, and I think director Steve McQueen's past collaborations with Michael Fassbender are nothing short of genius. But even with guidance from Fox Searchlight's consummately charming Nancy Utley and Steve Gilula, I think McQueen is going to struggle to adapt his persona, forged in the unapologetically snobbish art world, to one where tirelessly flattering random overseas freelancers and retired camera operators is the one sure path to victory. Awards writer Sasha Stone may have blamed herself for this frustrating encounter, but others may not be so forgiving.

Speaking of snobbishness, any thoughts on "Nebraska" and the other Cannes veterans that are finally getting seen by people who don't buy their bread at a boulangerie? 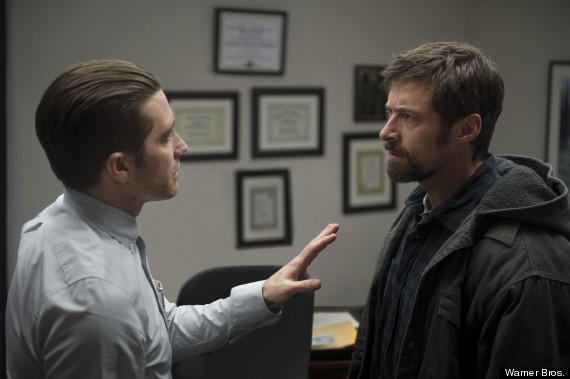 Rosen: Before we get to those Cannes holdovers, one last thing on "Prisoners": I wouldn't hold my breath for those nominations, no matter what Scott Foundas and Pete Hammond had to say about Denis Villeneuve's major studio debut. Not only is "Prisoners" over 150 minutes long, but Sasha Stone and Kris Tapley, while fans, were lukewarm on the film's prospects. Here's why: Even if Jackman gives a "career-best performance" in "Prisoners," it's hard to imagine him breaking through in a Best Actor race that includes Ejiofor, Whitaker, Michael B. Jordan, Leonardo DiCaprio, Christian Bale, Tom Hanks, Robert Redford, Idris Elba, Benedict Cumberbatch, Oscar Isaac and Bruce Dern.

I, of course, buy my bread at the Associated on the corner, but sight unseen I'd say Dern has a real shot because of his veteran status and his refusal to go into the supporting category. Here's his money quote to THR:

"My take is this: The story is about who Woody is and where he's going. It's probably 50-50 screen time with Will Forte, but Woody is a leading role. If I go supporting, I'm a whore. Because I never came to Hollywood to win an award. I came to do good movies. If I go supporting, it's embarrassing to the Academy because it looks like I'm trying to sneak in somehow so I can eat all those chicken and peas dinners. I'd rather go the right way than backdoor my way into a supporting because of my age or whatever."

That, right there, is why I've got Dern on my too-early Oscar ballot. His candor and support from old-school Hollywood types (ie; the people who vote for the Academy Awards) is what could push him into the Best Actor final five.

As for "12 Years A Slave," if McQueen becomes David Fincher 2.0, that would leave open the possibility of a feel-good film coming in and storming the race at the 11th hour. This is the part where I direct you to "Saving Mr. Banks" or "Monuments Men" or even "American Hustle," three films that won't screen at Telluride or Toronto. Wouldn't that be a twist ending to this awards season? (Feel free to slap me in the face for deigning to talk about the end of awards season before it even really started.)

Hogan: There you go again, Chris, tinkling all over the parade with arcane technicalities like "the number of actual slots in each acting category." Sometimes I wonder why I put up with you at all.

For what it's worth, I ran into a journalist friend this weekend who saw "Nebraska" not at a festival but in some screening room in Manhattan, and she was just about ready to fight anyone standing in the way of Bruce Dern and a nomination. So maybe Alexander Payne's follow-up to "The Descendants" (my favorite movie of 2011, you may recall) really will deliver the goods.

Regarding your 11th-hour theory, I couldn't agree more. If Steven Spielberg couldn't bend the Academy to its will with the dour yet important "Lincoln," why do we think McQueen will be able to succeed with "12 Years a Slave"?

In a world where "Argo" beat "Lincoln," I think Russell's "American Hustle," which voters may view as a make-good for "Silver Linings Playbook," certainly could blow this thing wide open. And in a world where "The King's Speech" beat "The Social Network," I could see "Monuments Men" giving it a go, despite Clooney's stated reluctance to campaign. And in a world where "Shakespeare in Love" beat "Saving Private Ryan," I don't think we can rule out Disney's "Saving Mr. Banks" -- with its one-two punch of Emma Thompson and Tom Hanks -- either. For a minute, I worried that the last film's Dec. 20 release date might not give it time to build momentum, but then I noticed that "Shakespeare in Love" didn't even open wide until January of 1999.

Then again, lighter isn't always better. "The Hurt Locker," "Crash," and "Schindler's List" all won the big prize. And it's also possible that "12 Years a Slave" is a better film than "Lincoln." Maybe it will turn out to be the best film of the year. And maybe, just maybe, the Oscar for Best Picture will actually be awarded to the best movie released in 2012.

What do you think, Chris? Am I finally losing it?

Rosen: The best movie winning Best Picture? At this point, I'd believe anything.