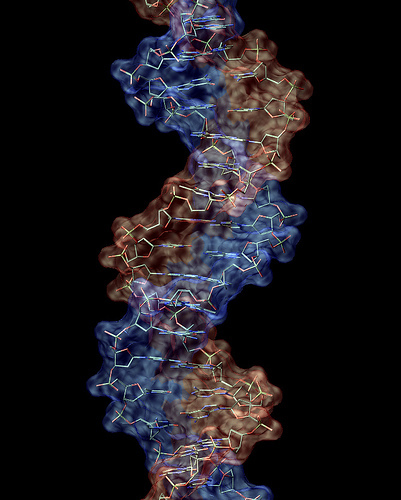 In 2009 a fisherman off the coast of Newfoundland, Canada caught a lobster. Normally, this isn't news considering the number of crustaceans pulled from the water every year in that part of the world. What makes this lobster so interesting is that it weighed 20 pounds and was estimated to be at least 140 years old.

Take a moment to really think about that last fact. In theory, this lobster hatched in 1869 - just four years after the end of the American Civil War. Most lobsters don't live to that ripe old age because they're eaten, injured or exposed to disease but if you removed these external forces the results would be very different.

Lobsters are one of a handful of species that appear to be "biologically immortal." These creatures don't age in the same way that you or I do. Every time our cells divide something called a telomere is shortened. There's a direct relation between telomere length and cell age with the oldest cells having the shortest telomeres.

Think of a telomere as the little cap at the end of your shoelace. That cap keeps the rest of the lace from fraying. When it comes to your body, these telomeres act in the same way by protecting the DNA within your cells. Once a telomere gets too short it can no longer guard the DNA and the cell begins to age and eventually dies.

Lobster cells behave very differently. Instead of shortening over time, a lobster's telomeres are constantly rejuvenating thanks to the enzyme telomerase. Humans also produce telomerase but not at the same levels as a lobster. In the human body cancer cells make the most telomerase which is part of the reason why the disease can be so difficult to fight. In a sense, cancer cells are almost immortal -- that is, as long as they manufacture telomerase.

We know telomere length is tied to aging and that the enzyme telomerase can prolong a cell's life. However, we also know that too much telomerase can lead to problems. So here is the question: is there any way we can undo the damage to our telomeres and make the right amount of telomerase without increasing our risk for cancer?

Scientists from the University of California San Francisco and the Preventative Medicine Research Institute monitored a group of men with low-risk prostate cancer who had elevated PSA levels (the blood marker for prostate cancer). Instead of being rushed into surgery or chemotherapy, these patients took part in a vigorous program consisting of: exercise, deep relaxation techniques like yoga or meditation, better dietary choices and group therapy classes where they were encouraged to express some of their emotions as well as personal obstacles.

This landmark study yielded impressive results. Within three months these men regulated 500 new genes tied to disease prevention, lowered their PSA levels, and - here's the most important point-- increased their telomerase by 30%. Even more compelling is that the cancer didn't get worse because of the heightened levels of telomerase. On the contrary, in many cases the cancer went into remission.

In a similar study -- also conducted by UCSF and PMRI -- 35 men with early-stage prostate cancer were monitored over a period of five years. Ten patients were asked to change their lifestyles while the other 25 continued with what they were doing.

At the end of the five years researchers found the patients who altered their lifestyles had telomeres that were up to 10 percent longer than when they started. Could that mean they lengthened their lifespan by 10 percent? By contrast, the telomeres in the other 25 patients had shrunk by three percent during that same period.

The research into telomeres is truly groundbreaking. Here is further evidence that we have the ability to change who we are, reverse disease, and even turn back the clock of our predetermined mortality at the most elemental level by letting go of old habits and behaviors. The participants in these studies began to control and alter their thoughts and emotions. They also made different choices, which lead to new experiences. From these experiences came new emotions and feelings that altered their biology as well as their genetic expression. By doing so these men may have elongated their lives.

These principles are very similar to those we teach in the workshops around the world. If your personality creates your personal reality...and your personality is made up of how you think, how you act and how you feel, then by changing any of these fundamental elements, it should lead to both a new personality as well as a new personal reality. When we make the decision to change our lives, fully commit to the work and then override old neural networks that lead us down the same predictable path and create new ones, our biology must change too. If a lobster can do it, why can't you?

Creative Commons DNA Rendering by ynse is licensed under CC 2.0

More:
healthy living agingFitness and Exerciselifestyle
Newsletter Sign Up
An essential daily guide to achieving the good life
Subscribe to our lifestyle email.
Successfully Subscribed!
Realness delivered to your inbox