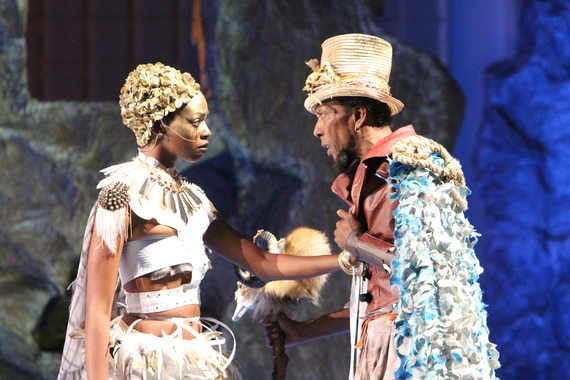 The third time's a magical charm. In its strongest outing since it launched public productions of Shakespeare two summers ago, the Classical Theatre of Harlem's "Tempest" is a vibrant, haunting interpretation that gives full voice to the play's explorations of slavery, colonization, and, ultimately, freedom. A number of factors contribute to the production's success: a striking set (by Christopher Swader and Justin Swader) that, under Alan C. Edwards's evocative lighting, makes superb use of the Richard Rodgers Amphitheatre's cavernous space; enchanting dance, movement, and flight (by Byron Easley, Emmanuel Brown, and Aaron Verdery, respectively); and strong performances from a number of supporting cast members. What elevates this production to greatness, however, is Ron Cephas Jones's portrayal of Prospero, whose commanding presence cedes over time to gentle, touching realizations about the human need for physical and emotional freedom.

Since the Classical Theatre of Harlem started producing free outdoor theatre in 2013, I have wondered when it would tackle "The Tempest"--an island tale of exile, betrayal, slavery, and race that resonates well with the company's mission to produce professional theatre that promotes diversity and racial equality. By choosing this summer, the company set its own production head to head with the Public Theater, whose iconic "Shakespeare in the Park" put forth a tepid "Tempest" in Central Park in June. Of the two, this uptown production is clearly the superior interpretation. Where the Public's production tread carefully--its black, white, and blue hues reflecting just glints of the play's deeper concerns--the Classical Theatre of Harlem production beats and thrums in outsized technicolor. Beyond stylistic choices, the Classical Theatre of Harlem version also boasts conceptual clarity that brings the play to thrilling life.

Director Carl Cofield vitally hones in on the questions that "The Tempest" asks so powerfully: what drives men to enslave and to exploit others? Once enslaver and enslaved are trapped in those dynamics, what does freedom mean--for both sides--and how can it be achieved? It is astounding that Shakespeare had already identified these themes by 1610 when "The Tempest" was written, on the earlier side of the massive project of colonization that European countries embarked upon, but scholars tell us that he had likely read letters sent home from Britain's colonial project in Jamestown, VA; in the very text of "The Tempest," Shakespeare also adapts the writings of French essayist Michel de Montaigne about the indigenous people of Brazil.

Cofield transplants the action of "The Tempest," originally set on an island in the Mediterranean, to the Caribbean island of Hispaniola, home of the Dominican Republic and Haiti. The transposition is so coherent that one suspects Shakespeare himself would have set the play here had he known about the place. (Last year's transfer of "Romeo and Juliet" to modern-day Harlem, in which the Montagues became lower-class African-Americans while the Capulets were from the Caribbean, was equally illuminating.) This setting not only allows for the production to be infused with Afro-Caribbean music and dance, including a spectacular wedding dance that brought down the house in the fourth act, but it also simply makes sense. When the audience can see the shipwrecked nobles not only as aristocrats but also as slave-traders (costumes by Rachel Dozier-Ezell), we understand viscerally that Shakespeare was talking about actual bondage, not just the magical capture of fairies and spirits.

Jones's Prospero wrestles with the trappings of power in what is ultimately a deeply humane way. Playing against an excellent Ariel (Fedna Jacquet) and a respectable Caliban (Carl Hendrick Louis), Jones reflects the myriad ways in which Prospero has learned to wield power--manipulation, seduction, and brute force among them--much to his own detriment. By play's end, Jones has given full import to Prospero's hard-won realization that his own freedom depends on that of others. The supporting cast is generally strong, featuring a number of effective couplings: Tanya Everett and Ryan Alvarado scheme believably as Antonia (Antonio in the original text) and Sebastian, and Emmanuel Brown and Anthony Vaughn Merchant bring raucous, drunken life to Stefano and Trinculo. As evidenced by his turn as Bottom in the 2013 production of "A Midsummer Night's Dream," Merchant has prodigious comic talents; here, they are undermined by unfortunate (and near-constant) interjections in modern-day English and Spanish.

The production has other distractions, including a few weak cast members. In adapting the text, the creative team has skewed the play's pacing; some longer expository scenes could have been tightened up. (My preferred option would be for the play to be performed in its entirety.) The sound is also managed so that actors' microphones often pick up mid-sentence. These minor qualms aside, "The Tempest" is such stuff as dreams are made on--an open-throated, resonant production by an upstart theatre company, reminding us not to take freedom for granted.